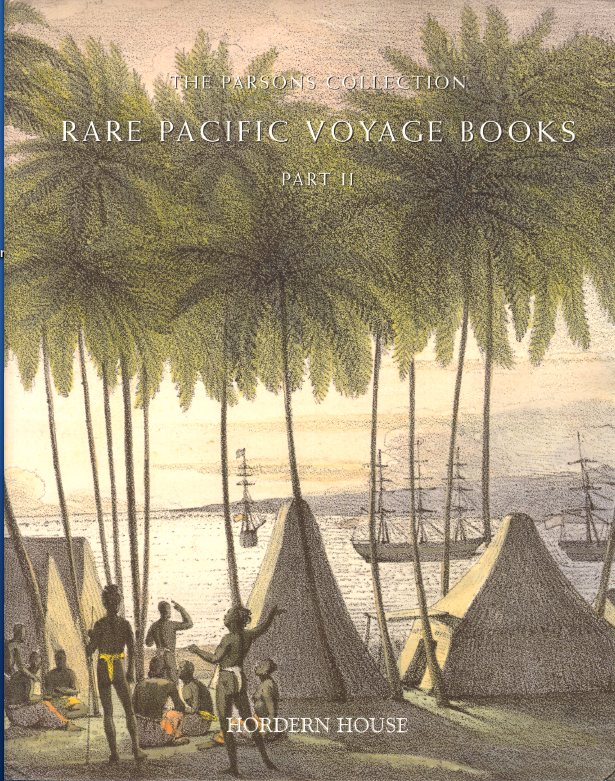 Hordern House, of New South Wales, Australia, has recently released the second part of their magnificent catalogue of the collection of David Parsons. Parsons, an American collector from Atlanta, developed one of the finest collections of Pacific voyages you could imagine. In January, we reviewed the first part of this collection, which started with Dampier's voyages in the 1670s and ended with Cook (see http://www.americanaexchange.com/NewAE/aemonthly/review_1.asp?id=234&q=hordern%20and%20parsons&page=1). This second part of the collection begins with the post-Cook era, and continues to the mid-19th century.

David Parsons reported that he decided to put his Pacific voyages collection up for sale to concentrate on a collection of Spanish and Portuguese expansion at the time of Columbus. We can see two very good reasons why he selected Hordern House to conduct the sale, though some might think an Australian bookseller out of the way. First, a great many Pacific voyages involved Australia or Pacific islands for which Australia is their closest large neighbor. Australia was the major stopping point for the greatest of all Pacific explorers, Captain James Cook. However, collectors of other areas, and America in particular, will find some of the greatest works for their libraries being offered in this catalogue. Just as Cook visited many other lands during his explorations, including the west coast of America, Parsons' collection covered many other Pacific countries. Indeed, many of these explorers never touched Australia. For example, there is a section on Russian explorers whose Pacific voyages never took them from the northernmost latitudes. These works are particularly interesting to collectors of Americana, as the Russians usually went to Alaska, or perhaps as far south as Nootka Sound (along Canada's Vancouver Island).

The other reason Parsons may have chosen Hordern House is the wonderful catalogues of his collection they have produced. Parsons' collection and provenance will always live in these catalogues, which in reality are large, fully described and richly illustrated memorials to his collection. Even if you are not in the market for the original books, if your interest is in Pacific voyages, you might want to contact Hordern House concerning a copy of this set. It is itself a collectible piece. Here are a few of the books that are offered in the second volume.