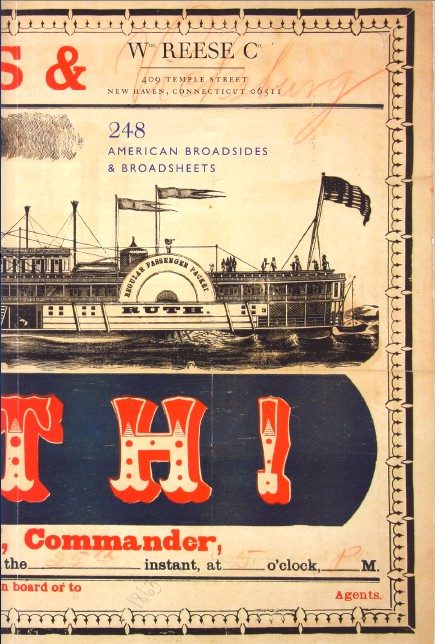 The 248th catalogue from New Haven bookseller William Reese Company offers a collection of American Broadsides and Broadsheets (and a few British ones to boot). These single sheet printings, often intended to be tacked up as posters, are among the most interesting of printed collectibles. Often they contain more immediate news than could be printed in book form, they may cover issues not complicated enough to warrant a book, and frequently are very rare, either because few copies were printed, or few of these ephemeral papers were saved. Then there's one other great advantage to broadsides when it comes to collecting. Since many were meant to be posted, they are very suitable for display, much more so than books that may only reveal a spine, stacked in a bookshelf with dozens of others. For collectors with an interest in early America, Reese's collection of broadsides offers some outstanding opportunities for display and collection. For example...

Item 67 is one of the occasional British broadsheets in this catalogue, but it is so intriguing we just couldn't overlook it. This one carries an important personal message from one Mrs. L. Gibbons, likely of Bath, England, in the year 1813. It is headed simply Advertisement Extraordinary! That it is. Evidently Mrs. Gibbons was in the business of measuring women's waists and such so she could sell them corsets, underwear and the like. However, some questions must have arisen regarding Mrs. Gibbons' gender. As the lady, if she was a lady, explains, "Whereas some ill-disposed Persons have scandalously reported that I, Mrs. L. Gibbons, have lately been discovered to be a Man! -- This is to certify you, Ladies and Gentlemen in particular, that the Whole is a vile Fabrication." Then she reassures (?) her customers "that I shall continue in my profession of making geographical, anatomical, and systematical Survey's of Ladies' Waists..." Hm... Respectable businesswoman or vile pervert? Maybe someone should have asked Mr. Gibbons. Priced at $250.

Here's another interesting personal message. This broadside was printed for George Featherstonhaugh, a noted geologist, but perhaps not an entirely pleasant person. It is headed, Rufus P. Eaton of Pipe Village, Lake Winnebago, Wis. A Scoundrel! A Knave! A Liar! And A Coward! Featherstonhaugh lists a litany of wrongs, from slandering his child to attempting to have him murdered. Was this all true? Reese, quoting from the Dictionary of American Biography about Featherstonhaugh notes, "American scientists were reluctant to give him credit for his geological writings, however, because Featherstonhaugh frequently engaged in ad hominem attacks on his opponents..." Reese also noted Daniel Webster called him "shallow, conceited, with quite a lurch towards mischief." We have not been able to find anything more about this dispute, nor anything about Mr. Eaton other than an 1885 death notice (this broadside is dated 1853), but considering Featherstonhaugh's reputation, I'd like to hear Eaton's side before accepting these claims as undisputed truth. Tem 52. $1,500.