Outlaws and More of the West from Gene W. Baade 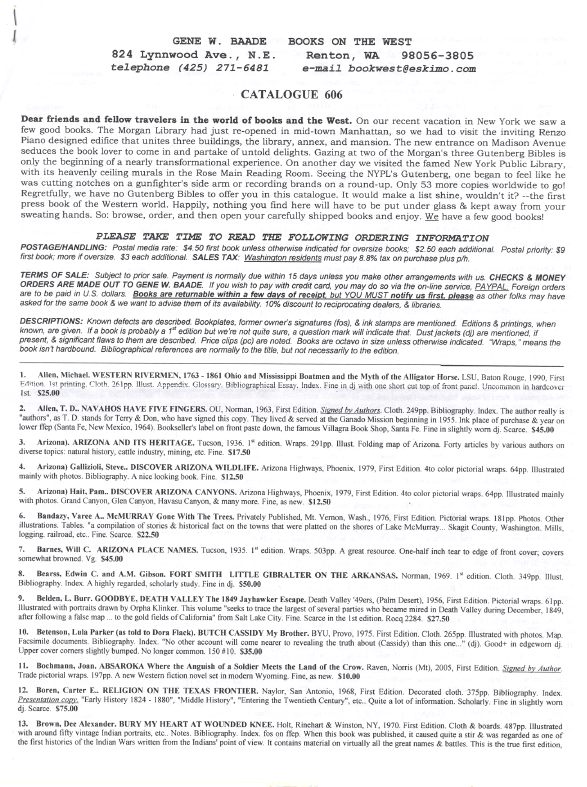 Outlaws and More of the West from Gene W. Baade

Just arrived in our mailbox a few days ago is the latest collection of Books on the West from Gene W. Baade of Washington State. His books are generally the unusual. It is filled with titles I have never heard of, but which sound like they would make most interesting reading. The nice thing is that if you agree, most are cheap enough to be purchased simply for reading. Nevertheless, when you are finished, you may want to hold onto them, for these are works that will fit in a collection of the West too. If you are one of the many people who collect or just enjoy the great American West, you should be on Gene Baade's mailing list. Now for a look inside the catalogue.

Lots of books and even a movie have been based on the career of the outlaw Butch Cassidy. Here is one that was actually written by a member of his family. Lula Parker Betenson tells her story in Butch Cassidy My Brother. Cassidy's real name was Robert LeRoy Parker. Most people accept as fact that Cassidy was gunned down in Bolivia in 1908 along with his partner the Sundance Kid. However, like Elvis, rumors of appearances in the U.S. turned up for many decades later. Egged on by a Spokane man who went around pretending he was Cassidy, sightings were a regular event of the day. However, the one that has always raised the most interest was a reported visit to the family compound in Circleville, Utah, in 1925. This is the claim made by Mrs. Betenson, Butch's last surviving sibling, in this 1975 book (she died in 1980). Supposedly, he drove up to the family home in a new black Ford that autumn, and stayed for about a week, meeting their father, two brothers, sister Lula, and other relatives. After the stay, Butch got in the car and drove off into the sunset. They never saw him again, but received letters and then a message from a friend of Cassidy's that he died in Washington State. In her book, Betenson claims her brother died in the Northwest in 1937, but that where and under what name is a family secret. Many researchers are dubious of her claim. They suspect she may have been playing a game, attempting to make some money (much money had been made writing about Cassidy, but not by his family), or simply was engaging in some fanciful thinking, incorporating others' dubious sightings into her own story. Butch may have lived until 1937 like Lula claims, and Elvis may be alive today. For all the letters he supposedly wrote, and people he met after returning from Bolivia, no documentary evidence can be found of this almost 30 year existence in the Northwest. You decide. Item 10. Priced at $35.

Item 15 is the story of some more outlaws: The Border Outlaws...The Younger Brothers Jesse and Frank James and Their Comrades in Crime... For Jesse James collectors, this should be a find. Most biographies of James were written after his assassination in 1882. This one was published in 1881. $325.