Western and Other Americana from Arthur Clark 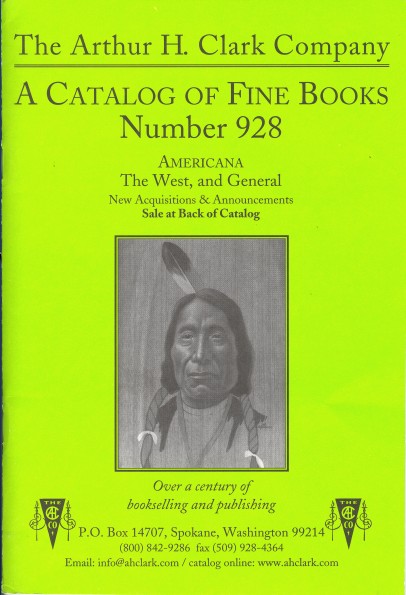 Western and Other Americana from Arthur Clark

The Arthur H. Clark Company has issued the 928th catalogue in its long-running series on the American West. Their catalogues do extend to many other books of Americana, and a little totally outside of the field, although the West remains their focus. Here are a few samples from their latest offering.

Have you ever wondered what some of America's earlier celebrities, those not quite as memorable as Washington and Lincoln, looked like? Here is your chance to find out. The book is Dictionary of American Portraits: 4045 of Important Americans from Earliest Times to the Beginning of the Twentieth Century. Compiled by Hayware and Blanche Cirker and the staff of Dover Publications in 1967, this book includes pictures of famous Americans from all walks of life up to the early days of the 20th century. Item 16. Priced at $125.

The great success by America carving away land from Mexico during the 1840s led several private persons to believe they could do the same. One of the last of these was the filibustering expedition of Colonel Henry Crabb, an unsuccessful office seeker in California who sought personal success and power on the other side of the border, in the Mexican state of Sonora. Perhaps he felt his wife being the member of an important local clan would help. He led a group of not quite 100 Americans across the border and almost 100 miles into Mexican territory. For a while, they seemed to have the upper hand, and perhaps Crabb expected the locals would eventually join him. However, it turned out that the Mexicans had had quite enough of Americans taking over their land, and once reinforcements arrived, Crabb and his men were overwhelmed. Angry Mexicans executed all of them, saving the worst indignities for Crabb. He was marched to the town square where he was executed by firing squad, followed by the removal of his head. The Mexicans had sent their neighbors to the north a message. Item 363 is an official publication from 1858, Message from the President of the United States, communicating Official information and correspondence in relation to the execution of Colonel Crabb and his associates. $165.

Here are a couple of items tying together Kansas and Oregon with a most interesting association. The first is Governor Geary's Administration in Kansas, with a complete history of the territory until July 1857 ... by John Gihon and published in that year. Geary, a native Pennsylvanian, was an oft-injured hero of the Mexican War who became San Francisco's first mayor. He returned east because of his wife's failing health, but after her death, he was appointed Governor of Kansas in 1856. He arrived just in time to be stuck with the horrors of bleeding Kansas, where pro and anti-slavery forces battled for control of the territory. Geary left Kansas within a year, a strong abolitionist as a result of his experiences there. He would go on to serve the Union during the Civil War, and later six years as Governor of Pennsylvania. He died shortly after leaving office in 1873. Item 386 is a copy of Gihon's book that belonged to Geary's brother, Edward. It is signed three times by Edward, once by Geary's son John, Jr., and also by a later Geary descendant. $110.