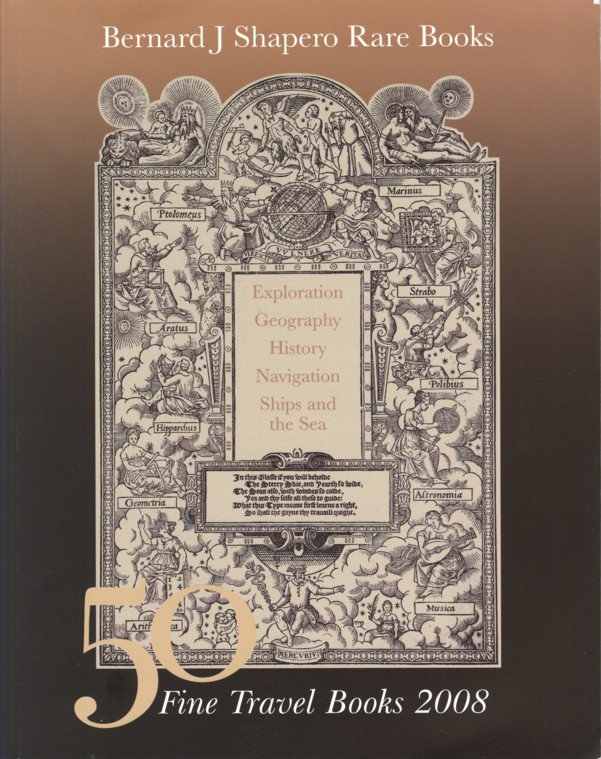 Bernard J. Shapero Rare Books has issued another one of its magnificent fifty item catalogues. A little while back, we looked at a catalogue of fifty superlative maps and atlases. This month, we review their catalogue of 50 Fine Books. In this case, "fine" is an understatement.

This is not an easy catalogue to describe. The focus is on illustrated books. Illustrated books, naturally, need to be seen to be appreciated. Words just won't do them justice. While "illustrations" is the technically correct word, we are really looking at works of art. Indeed, many of the illustrations were done by artists, and after the books were printed, those same illustrations were often colored by hand, another artistic skill. While the drawings may have at one time been intended more to inform, they are today better appreciated for their beauty. These are among the fifty most beautiful illustrated books you will find.

Here is one note of caution for collectors. These are not inexpensive books. The pricing may be reasonable for what is offered, but this is not material the average collector can readily afford. It is intended for those with the resources to collect at the highest level. That said, anyone can certainly appreciate this wonderful catalogue, and Shapero also offers many other books that are also of great interest, but are within the reach of more typical collecting budgets. Here are few items from this fabulous fifty.

Item 45 is a manuscript Royal Deed from Tsar Nicholas I of Russia. Nicholas I ruled Russia from 1825-1855, and by most accounts, was not a particularly pleasant ruler. Whereas his brother and predecessor, Alexander I, had shown some interest in reform, Nicholas was old-style conservative and authoritarian. He similarly supported the status quo in Europe against reform movements, including a harsh suppression of rebellion in Poland, reminiscent of those of the Russian Communists many generations later. Nicholas died during the Crimean War, a war he started and which became a major Russian defeat. However, for all the ugliness of Nicholas' rule, his Royal Deed is a thing of beauty. This deed, signed by Nicholas I, granted a coat of arms and title as a count to General Aleksei Nikitin in 1851. Nikitin had served his country during the Napoleonic Wars and would have been an older man with a long, distinguished record at the time. Priced at £65,000 (British pounds, or approximate U.S. equivalent of $122,862).

America has its Audubon, Britain its John Gould. Gould's The Birds of Great Britain is an ornithological masterpiece akin to Audubon's though somewhat later in time. This is a five-volume set, published from 1862-1873. While the text is informative, it is the illustrations that make this book remarkable. Item 19. £60,000 (US $113,413).