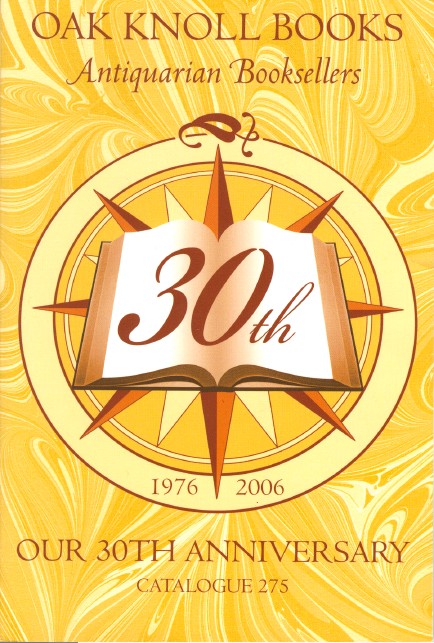 Oak Knoll Books has issued its 275th catalogue, in support of the antiquarian bookseller's 30th anniversary. That's a lot of years and a lot of catalogues, but the New Castle, Delaware, bookseller shows no signs of slowing down. In fact, their catalogues are the most extensive in terms of listings we receive. This is a short one, about half the typical size, and yet it still offers 566 items. It contains mostly books within the various divisions of Oak Knoll's "books about books" specialty: bibliography, bookselling, booksellers, binding, printing, bookplates, even forgeries. Then, there is also a catchall "other" section, so that anything is possible. Here are a few items from this indomitable bookseller whom we have no doubt will be around for another thirty years, or until melting ice caps turn New Castle into New Atlantis.

The Private Papers of Henry Ryecroft is something of an autobiography, but not Ryecroft's. Henry Ryecroft was the creation of author George Gissing, but there were many similarities between his real life and Ryecroft's fictional one. Gissing struggled for much of his life, literate and smart, but financially poor. Along the way, he would make a few unwise choices that helped create his difficult situation. A promising student, he took up with a prostitute, stole to support her, was kicked out of school and briefly imprisoned, married her, and was miserable until she died. His second wife was no better; another woman with whom he had little in common, who went insane. The book starts with Gissing's take on Ryecroft's obituary, which mentioned when he was born and died, and the titles of a few of his books, but little else. An unremarkable obituary for an unremarkable man. Perhaps that was how Gissing saw his own life. Ryecroft struggled to get by, occasionally had a little extra to spend on travel, and persevered. However, the fictional character, out of the blue, is bequeathed a healthy life annuity by a friend, which allows him to live a more relaxed, contemplative life, which he expounds upon in the diaries written in these later years by Ryecroft/Gissing. Perhaps this was Gissing's ideal world. Item 510 is the first American edition of this imaginary diary, published in 1903, the year Gissing died. Priced at $125.

Item 441 is a particularly unusual selection for Oak Knoll, the log book for a merchant ship (the Lama or Lamas) which sailed from Boston to Brazil to Cape Verde and back in 1829-1830. There were no mutinies or shipwrecks in this voyage, but the log book does present a window on trade at this time. Vinegar, tar, rosin and soap are among the commodities traded. This was the era of shoe manufacturing in the Boston area, and the Lama carries shoes to Brazil. In return, she transports cowhides back to Boston. Salt, fish, and vegetables are picked up in the Cape Verde Islands. Included is additional correspondence from the log-keeper, Isaac Bradford. $1,975.