Original Photography in Books and Albums from William Reese 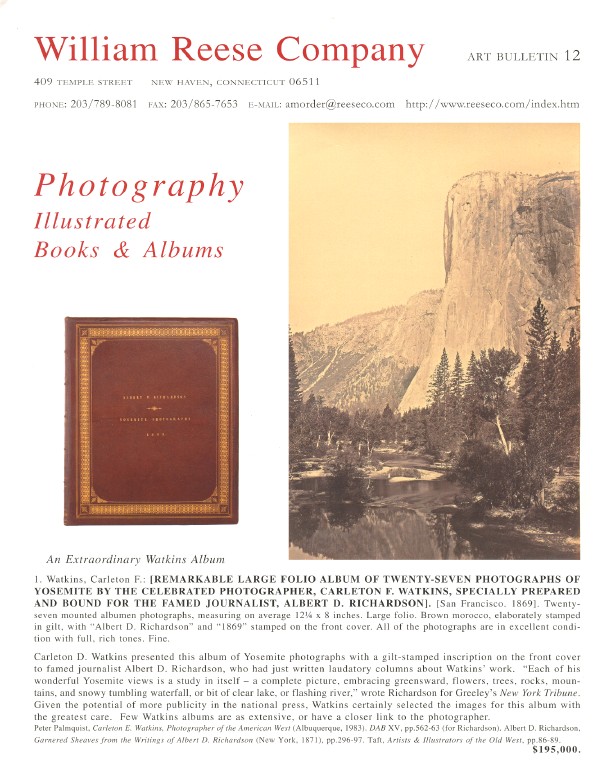 Original Photography in Books and Albums from William Reese

Warning! Notice! On the second page of this review there is a photograph of a most attractive, totally nude young woman. This photograph is a work of art (as is the woman). However, if such things offend you, please do not go to the second page. Read page one in full, but skip the rest. For those who appreciate such images, strictly from an artistic perspective, you may proceed to page two, but only after reading page one in its entirety.

The William Reese Company has issued one of its periodic "Art Bulletins," this one titled Photography Illustrated Books and Albums. This is a fairly short pamphlet, six pages with just ten items. The quantity may not be high, but the quality is. These are ten spectacular items, the highlight of which is their photography.

Item 1 is an album of Yosemite Photographs, by western photographer Carleton F. Watkins. Watkins put together this album of 27 large photographs (12 1/4" x 8" on average) for journalist Albert D. Richardson in 1869. Richardson had written very complimentary articles about Watkins' work in the New York Tribune, so it is likely the latter appreciated the journalist. It is hard for photographs of Yosemite not to be spectacular, and Watkins does not let us down. See the image from Yosemite on the cover of this catalogue to the left (click it to enlarge). Richardson's name and the date are stamped in gilt on the cover. Priced at $195,000.

Item 3 is a western rarity, Sport Among the Rockies. The Record of a Fishing and Hunting Trip in North-Western Montana. By the Scribe. The scribe was Charles Spencer Francis, and he published this very limited edition work (15 copies) in Troy, New York, in 1889. It includes mounted photographs of outdoor adventures in Montana, a tent city filled with taverns, ranches, Indian agencies, even Sitting Bull's son. $30,000.

Item 4 is Redwood and Lumbering in California Forests by Edgar Cherry. This 1884 book includes 24 photographs mounted on card stock, designed to prove to skeptical easterners that the redwood trees really were as large as claimed. The purpose was to promote the use of redwood. $14,500.

Item 5 is the photograph referenced at the top of this review. The nude young lady was a prostitute working in Storyville, New Orleans' notorious red-light district. Lying on a couch, apparently in a pose designed to attract business, she was photographed by New Orleans photographer Ernest Bellocq. His name is known, but sadly, hers has been lost. Bellocq somehow managed to gain access to the brothels of Storyville around the turn of the century. He was an amateur photographer, but a well-respected one. He also lived just a block from Storyville, so it was a logical place to visit. What his motives were in taking the pictures is not clear, though he obviously had to have plenty of cooperation from his subjects.