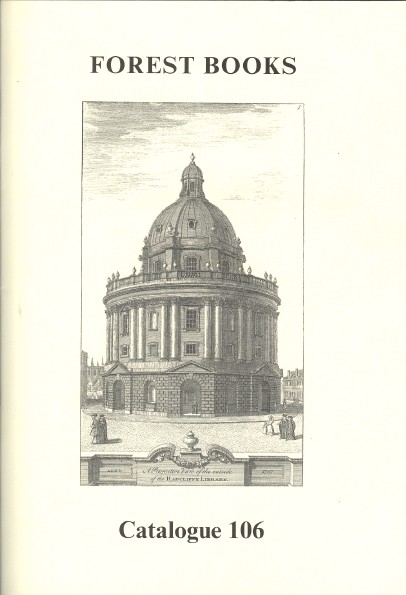 British bookseller Forest Books has issued its Catalogue 106 of Bibliography, Bookbinding and Reference. It offers over 600 books in the book arts field, and anyone who collects in this area, especially those with a focus on the UK, will be particularly interested. However, many items will intrigue collectors outside the boundaries of book arts. For example, there are many very old auction catalogues, including several from the early 19th century. The level of material being offered at auction from private collections at that time was astounding, comparable to what you would only find in the top institutional libraries today. These auction catalogues, plus numerous library, bookseller, and private catalogues available herein, are both wonderful bibliographies and fascinating studies of what book collecting was once like. Here are some of the items Forest Books is offering.

Alfred Morrison was the son of a successful merchant and collector, who inherited part of his father's estate and collection when he died. Morrison would go on to collect many things, paintings, prints, porcelain, Persian rugs, and gems. However, he is best known for the truly magnificent collection of autographed letters he put together. It was one of the best such collections ever assembled. Item 323 is the Catalogue of the Collection of Autograph Letters and Historical Documents Formed Between 1865 and 1882 by Alfred Morrison. This is a ten-volume set, compiled by A.W. Thibaudeau from 1883 to 1897, the year Morrison died. Priced at £950.

The Aldine Press is one of then most noted of early printers. Started in 1494 by Aldus Manutius (or Aldo Manuzio) of Venice, it attempted to make classic books available to a wider audience, including people of more modest means. This entailed the printing of smaller books and the use of smaller type. Among Aldius' innovations was the creation of italics. James Toovey acquired a collection of Aldine works which he offered for sale in 1880 in this catalogue: A Catalogue of an Extensive and Extraordinary Assemblage of the Productions of the Aldine Press... However, Toovey had no takers, and the collection was not sold until 1899, when it was purchased by J. Pierpont Morgan. Item 8. £95.

Is any subject too dull too collect? Apparently not. Item 1 is Historical Accounting Literature. A Catalogue of the Collection of Early Works on Book-keeping and Accounting in the Library of the Institute of Chartered Accountants in England and Wales. Evidently this is a bibliography of a notable, if not entirely exciting collection of books you probably wouldn't read for pleasure. £95.