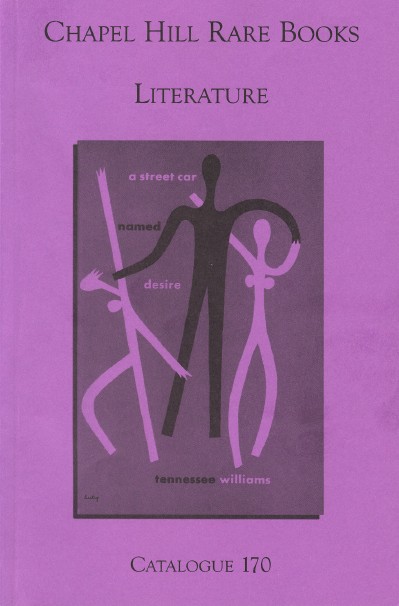 The latest catalogue from Chapel Hill Rare Books is a bit of a departure from most that we have seen from them. Usually, their catalogues are filled with 19th century nonfiction, predominantly from the American South. None of those apply here. The title of catalogue 170 is simply Literature. It includes over 500 items of primarily American and British literature, with no skewing towards the Southland. Most are 20th century works, a few from the 19th, but then a few from the 21st as well. Many are of relatively recent vintage. This is less an antiquarian catalogue than a collection of first editions and other early printings of works by authors, some famous, some who became famous, and others still obscure whose works are very rare. There are a few very notable and, naturally, pricey first editions, but most items in this catalogue are modestly priced. Many of the relatively recent firsts would seem to offer a potential to one day become quite pricey themselves. There are undoubtedly some outstanding ground floor opportunities here for those able to determine which writers have the greatest potential for growth in their reputations. Here are a few items Chapel Hill Rare Books is offering this month.

Joel Chandler Harris is one of the more controversial American writers. Historians have never known quite where to put him. He was a turn of the century southern white man who gained his fame retelling the "Uncle Remus" stories, stories that were part of the culture of local black people. He wrote them in dialect, at times so extreme as to make the stories hard to understand. Harris has been portrayed as everything from someone who appreciated and helped promote understanding of the black community, to someone who grotesquely parodied that community, or simply made money from it. We won't attempt to settle the debate here, but we will tell you that offered in this catalogue is a first edition from 1904 of The Tar-Baby and Other Rhymes of Uncle Remus. Item 245. Priced at $450.

Here's a start for someone who might like to collect books about famous authors written by their relatives. Not ones written by a child or spouse, but ones written by the less direct relation. For example, item 256 is Ernie: Hemingway's Sister "Sunny" Remembers. Did anyone besides sister Madelaine Hemingway Miller refer to Hemingway as "Ernie?" Item 256, published in 1975. $65. Item 484 is My Cousin Mark Twain, by Cyril Clemens. This is an uncommon 1939 work published by the Rodale Press, better known for their gardening titles. $80.

Item 311 is a 1977 first edition of Arthur Miller's In The Country, signed by Miller. It is illustrated with photographs taken by his wife. No, not that wife. This wife was photographer Inge Morath. Morath met Miller when she was called upon to take photographs of the filming of "The Misfits," which Miller had written for then wife Marilyn Monroe. Morath got to photograph Monroe, and eventually got her husband too after Miller and Monroe divorced. Item 311. $95.