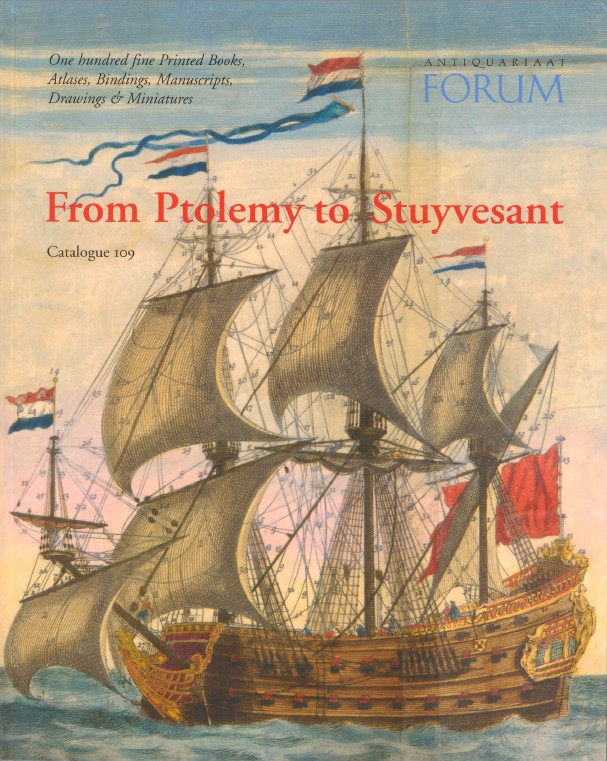 The Antiquariaat Forum has released a new catalogue entitled From Ptolemy to Stuyvesant. It is one of the more impressive book catalogues you will find, running 180 pages to describe and illustrate just 100 choice items. You will not find any recent material here. Some items qualify as incunabula, while the "new" material is from the 18th or 19th centuries. For those who collect seriously old and classic books, the Antiquariaat Forum is providing a wonderful selection. Here are a few of them.

We start at the beginning, Geographia, by Claudius Ptolemaeus, better known as "Ptolemy." Ptolemy was born in the first century, in Roman Egypt, and is perhaps best known as an astronomer. However, geographer was his second major avocation. His manuscript atlas, essentially lost for a millennium was rediscovered around 1300. However, it would take the invention of printing to spread his learning, now almost fourteen centuries old, to the world. Item 1 in the catalogue is a 1490 Roman edition of the atlas. It is based on the plates used in the 1477 Bologna edition, the second printing of Ptolemy? ancient work. It includes 27 maps, with one of the world, as Ptolemy new it. It extended from just off the east African coast to the middle of China, and from the North Pole to the middle of Africa. No more of the world was known to him, and even this portion suffered from inaccuracies. Nonetheless, it was a remarkable accomplishment that would not be duplicated for many, many centuries. Priced at €250,000 (Euros, or approximately US $318,800).

Item 74 is the first edition of the first emblem book. Emblem books are something of a forgotten genre today, but for centuries they were extremely popular, and maintain a loyal following of collectors who prize these distinctive works. An emblem book consists of an image with adjoining text. They will often be allegories, stories with a moral that tie to the image presented. The first of these books was created by Andrea Alciati, Emblemata Liber, or Book of Emblems. It was printed in Augsburg in 1531. It was reprinted at least 130 times over the next two-and-a-half centuries. Alciati was best known for his law books during his lifetime, but his reputation today rests on this groundbreaking work. €150,000 (US $191,283).

For collectors in the physical sciences, item 34 is Die galvanische Kette, mathematisch bearbeitat, by Dr. Georg Ohm. Ohm was a pioneer in discoveries concerning electrical circuits and resistance. Indeed, the unit of electrical resistance, the ohm, was named for him. This is the 1827 first edition of his important work. €20,000 (US $25,765).