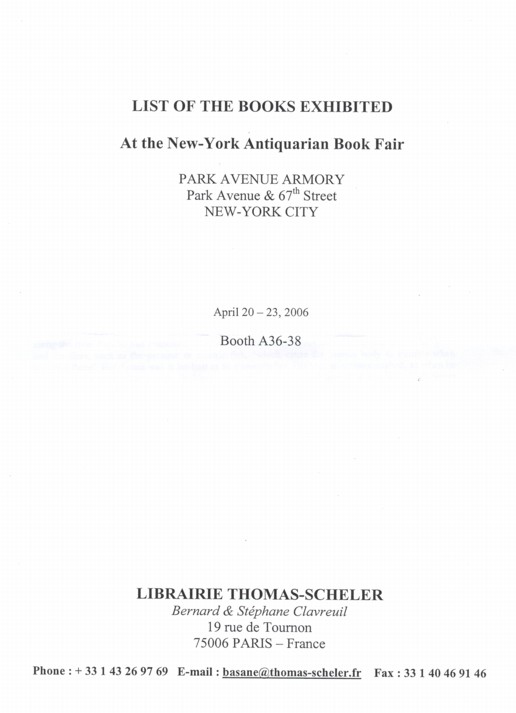 Librairie Thomas-Scheler issued a list of books exhibited at the recent New York Antiquarian Book Fair. This collection is certainly appropriate for an antiquarian fair, as most items are very old, including several works of incunabula, and an even older illuminated manuscript. This is not a catalogue for the faint of heart or wallet, but for those who collect on a high level, this is a spectacular collection of works. Here are a few.

Item 29 is the first German edition of the earliest collection of voyages, Newe unbekanthe landte Und ein newe weldte... compiled by Francazano de Montalbodo. Published in Nuremberg in 1508, included are journeys by Columbus, da Gama, and Vespucci. It is considered one of the most important publications of early American history extant. Priced at $350,000.

It was the master's masterpiece. The Tragedy of Hamlet Prince of Denmark is probably the best known of all of Shakespeare's plays. First published in 1602, item 37 is the fifth quarto edition, published in London in 1637. $280,000.

Item 30 is the source for the word that refers to a perfect world. This is Thomas More's Utopia. Utopia was an imaginary island where people all got along, tolerance was practiced, and people had no need for private property. It would be the ideal on which numerous "utopian" communities were formed, and was likely a model for communism, which hardly lived up to More's ideal. While More may be best remembered for this imaginary land today, it was only a minor diversion from his serious pursuits. More was a devoted member of the Catholic Church, and a devoted servant of King Henry VIII, achieving high positions in government. All of this worked well enough until Henry decided he wanted to dump his wife for another woman, but the Catholic Church refused to grant him an annulment. More tried to walk a thin line between supporting his King and following Church policy, but ultimately, Henry demanded total acceptance of himself as head of the English Church, and More could not give complete assent. Like many others who crossed Henry, More had his head removed from the rest of his body in 1535. Henry's England was not Utopia. Offered is a first edition of this famous work. $500,000.