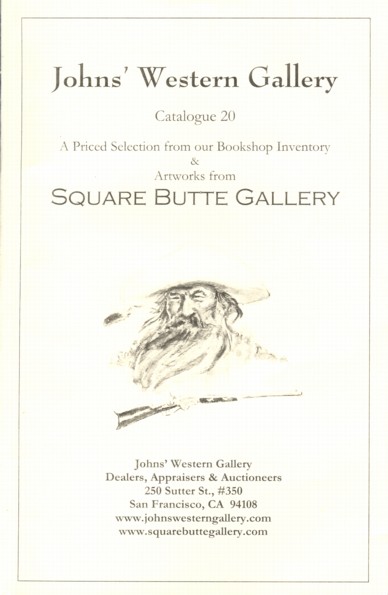 We have just received Catalogue 20 from Johns' Western Gallery of San Francisco. Most folks probably know of Johns' Western Gallery for its auctions. They offer interesting and frequently very reasonably priced Western Americana at their auction sales. However, Johns' also publishes occasional catalogues of priced books and related ephemera, along with some works of art. These catalogues provide an eclectic collection of printed or manuscript ephemeral items along with books. They will be especially interesting to collectors who collect books in a particular field, but are not unwilling to expand their collections somewhat beyond traditional books.

Among the ephemeral items found in this catalogue are things such as letters, bills, stock certificates, postcards, bank drafts, broadsides, photographs, tax receipts, even oil paintings and artifacts. Of course, there are books too. If you are reading this review, you are most likely a collector of books, and we would agree that this should be the foundation of your collection. However, these related ephemeral items can add depth and interest to a book collection. Johns' catalogues are worth a look, particularly for those who collect within the field of Western Americana.

Most people don't associate Montana with earthquakes. Neither did most people in Helena in 1935, so not many were prepared for the earthquake of 1935. Actually, it wasn't an earthquake, but a series of them. None were of California size, but folks in Montana were not building to earthquake standards in the years before 1935, and smaller damage caused by the first shock was exacerbated by each succeeding one, spread over several weeks in October. Among the notable buildings severely damaged was the new high school, the National Biscuit Company bakery, the Kessler Brewery, and City Hall. High school students had to use railcars as classrooms for the next several months. Two people died and damage was estimated at $4 million. A reminder of what can happen in places other than America's Pacific coast is provided in Helena Earthquakes: A Story of the Earthquakes that Rocked Helena, Montana, and Vicinity, in the Fall of 1935... by C.R. Anderson and M.P. Martinson. Item 67, published in 1936. Priced at $15.

For those whose interest lies down the road at Butte, here is A Brief History of Butte, Montana, the World's Greatest Mining Camp, published in 1900. From the past, Harry Freeman's book gives a look at the community's even more distant past. Item 75. $300. One more from Big Sky Country: Montana: A State Guide. This is one of the Federal Writers' Project publications put out by the WPA (Work Progress Administration). The WPA provided work for all types of people, even writers, during the Great Depression. The project ended in the early 1940s when all resources, including human ones, were needed for the war effort. Item 75, published in 1939. $35.