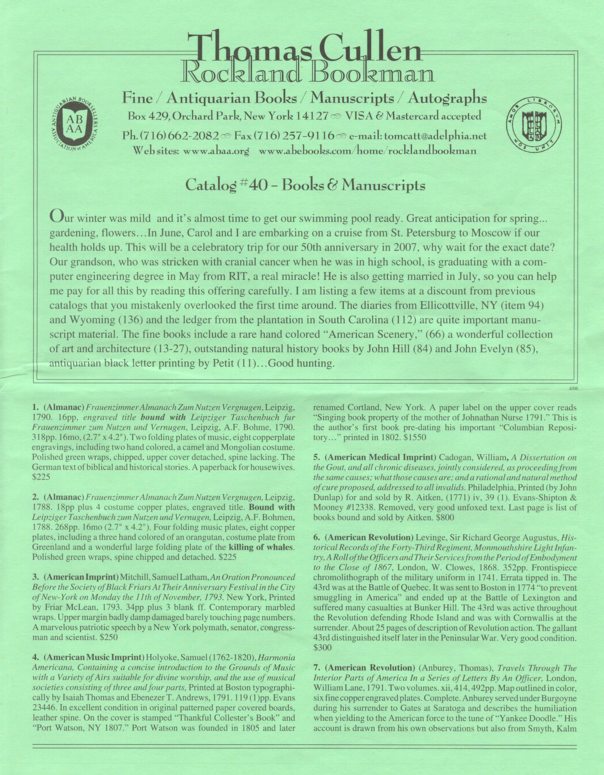 We have received catalogue number 40 from Thomas Cullen, Rockland Bookman. Cullen offers an unusual collection of books and manuscripts, unusual but always interesting. His catalogues always leave you asking, "where did he find that?" Along with books, he manages to find diaries pushing two centuries old, old photo albums, autographs, letters, catalogues, and just about anything else that fits the books and ephemera category. You will be entertained just seeing what he has, and most of these items, unusual if not unique, are very reasonably priced. Thomas Cullen's catalogues are designed for almost anyone's budget. Here are a few of the items he has.

Here is a fascinating item for American history enthusiasts. Item 8 is The Annual Register Or A View of the History, Politics and Literature for the Year 1770. This London item includes an account of "the unhappy riot at Boston in New England." This would be none other than the Boston massacre, which so incensed residents of that city it would be a rallying cry for the revolution that would come a few years hence. The dead and wounded are listed, including "a mulatto man, named Crispus Attuck, born in Framingham, ...also killed instantly; two balls entering his breast..." Crispus Attucks is considered by many to be the first American to die in the revolution, and for all the discrimination that followed, it's hard not to appreciate the fact that the first American patriot to sacrifice his life for our freedom was a black man. Also recounted is the trial of the British commander, Thomas Preston, his defense by John Adams, and his ultimate acquittal. Priced at $325.

Do you remember the Studebaker? My father bought one shortly after the War. Their sleek styling was way ahead of its day. It would not be until the mid-1950s that other automakers would catch up. Unfortunately, Studebaker's costs were high and it did not have the means to compete with the Big Three in terms of pricing as auto sales ramped up. It merged with Packard, and after a brief run in the early 1960s based on its trendsetting compact "Lark," it was crushed when the Big Three introduced their own compacts. The last Studebaker rolled off the assembly line in 1966. However, Cullen takes us back to an earlier day, and a Studebaker that not even those of us who recall their cars still remember. Item 118 is Studebaker Vehicles, Trade Edition 1910. There are no automobiles in this catalogue. Though they did build electric cars earlier, the first gasoline powered Studebaker was produced in 1913. This is a catalogue of Studebaker wagons, buggies, and the like. Founded in the 1850s by the five Studebaker brothers, many of the wagons that carried settlers and their belongings into the West were Studebakers. Not Fords or Chevys, but Studebakers. Of course, most of these had just one horsepower. $325.

Are you a fan of illustrator Howard Pyle? He was a famed book illustrator at the turn of the last century, particularly of children's adventure tales. He also taught many other artists of his day, including N.C. Wyeth. Of course, an autographed Pyle book would be of special interest to anyone who collects him. How about 16 Pyle autographs? Seriously. Item 61 is a copy of Oliver Wendell Holmes' 1894 Houghton, Mifflin The Autocrat of the Breakfast Table, illustrated by Pyle. This copy comes with an inscription to "my fellow artist, Kate Smalley." However, 15 of the plates are also signed, including comments on them, such as "I think this is one of the best of the set," and "This is Dr. Holmes favorite." $3,500.