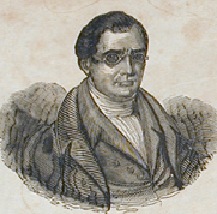 
The Indian Captivity, sad tales of white people captured by natives, was a favorite genre of the 18th and 19th centuries. Edwin Eastman recounted a particularly sad story in Captured and Branded by the Camanche Indians in the Year 1860. A True Narrative. Eastman witnessed his parents and only brother murdered before his eyes, his wife sold to another tribe for a few trinkets. But cry not for Edwin Eastman. The only thing true about this "true narrative" is that it was truly false. Eastman also told about this "Indian Blood Syrup," whose formula he obtained in captivity, which could cure all kinds of ailments. And guess what? Eastman had some bottles of this miraculous potion to sell you, along with his story. Item 44. $250.

Item 51 is the Obituary Notice of Isaac Hayes... Isaac Hayes is dead? We knew they killed off his "Chef" character on South Park, but Hayes himself? This is the man who gave us the "Theme from Shaft" (Academy Award winning song), co-wrote "Soul Man," was an inspiration for Barry White (okay, we'll forgive him this indiscretion), and was inducted into the Rock and Roll Hall of Fame. And now he's gone? Not so fast. This obituary is dated 1879. Hayes wasn't born until 1942. This must be a different Isaac Hayes. The earlier Hayes was a physician in Philadelphia, and evidently a highly respected man. However, we don't know whether he too was a "bad mother." $175.

Archie Cook had a bone to pick with his local medical society in Reply to the Action of the College of Physicians & Surgeons, of Louisville, KY. Cook says the Society has taken "responsibility of not only expelling, but of attempting to utterly annihilate professionally, the writer of this article." Cook's crime? He was charging $3 to examine applicants for life insurance when the official rate was set at $5. The more things change... Item 32. $250.

It was probably the worst Supreme Court decision ever. Item 60 is one of the official printings (Appleton, New York, 1857) of A Report of the Decision of the Supreme Court...in the Case of Dred Scott... It was the case in which the Court determined that black people, even free ones, effectively had no rights, and Congress had no power to exclude slavery from the new territories. Chief Justice Roger Taney may have felt he was saving the institution of slavery, but in reality, he was speeding it towards its inevitable demise. $1,750.

Item 72 is a satirical attack on the Know Nothing Party, Know Nothingism by "I Don't Know." The American Party, better known as the "Know Nothings," was a nativist political organization that rose to great prominence in the 1850s, and just as quickly disappeared. Their target was immigrants, particularly Catholics and the Irish. Speaking of the party's members, the author bitingly points out, "foreign blood, the object of his hate, Flow'd in his father's veins." $375.