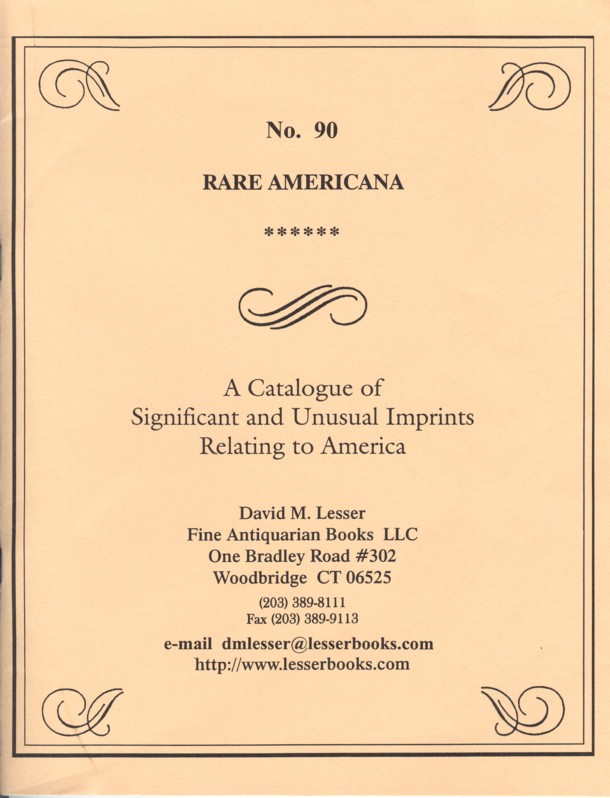 We have received catalogue 90 of Rare Americana from David M. Lesser Fine Antiquarian Books, and as always, it is a treat for those who collect in the field. Lesser's catalogues are filled with the unusual and obscure, though the items generally deal with the critical issues of the day. There are pamphlets of early anti-slavery societies, those that paved the way for the debates that would eventually tear the nation apart. There are accounts of major trials, perhaps forgotten today, but the ones that would have filled Court TV if Court TV had existed in the 19th century. We hear political debates, theological debates, ethnic debates, all of the disputes which occupied our ancestors' time, just as new versions of the same old issues dominate our own. Democratic-Republican splits, views for and against immigration and immigrants, separation of church and state -- none of these issues are new, they just take different forms. David Lesser's catalogues are a window on the world as experienced by ordinary Americans, and as such, they are among the most fascinating we receive. Here are a few of examples.

Davy wasn't the only Crockett to die in 1836. Simeon L. Crockett also passed away that year, but unlike the frontiersman, he was no hero. Simeon Crockett was an arsonist, who set fire to a Boston tenement. Reportedly, 100 people lost their lives in that fire. If so, Crockett became victim number 101. He was tried, convicted, confessed, and was executed. The book is A Voice from Leverett Street Prison, or the Life, Trial and Confession of Simeon L. Crockett. Who was Executed for Arson, March 16, 1836. Supposedly, his behavior was caused by drink, and this book is a temperance tract as well as a criminal history. The author was probably Edward T. Taylor, prison minister who testified to the validity of Crockett's confession. Item 35. Priced at $150.

Temperance was not only an issue for the Union. Evidently the Confederacy had drinking problems as well. This problem is elucidated in Liquor and Lincoln. By a Physician, circa 1862. The unnamed physician warns that the South will not gain its freedom from "Lincoln's usurpation" if it continues to "spend the hours and days, in drinking, gambling, and too often, alas! in obscene and profane jocularity." Better to be bowed under Lincoln's yoke, he says, "than made ourselves the willing slaves of groveling passions, and depraved appetites." Item 74. $600.

John A. Wills expressed his strong support for equal rights in 1841 in this Oration, Delivered Before the Citizens of Blairsville...(Pennsylvania). He believed that all men and women had divine rights and that the government had no business taking those away. Even the unpropertied, he believed, had equal rights to the franchise. However, the following comment seems like a bit of a backhanded compliment: "They [rights] belong alike to the Indian, the Negro, and the Asiatic -- to humanity in all its forms, however degraded and disgusting -- equally with the more favored Caucasian race." Item 140. $475.