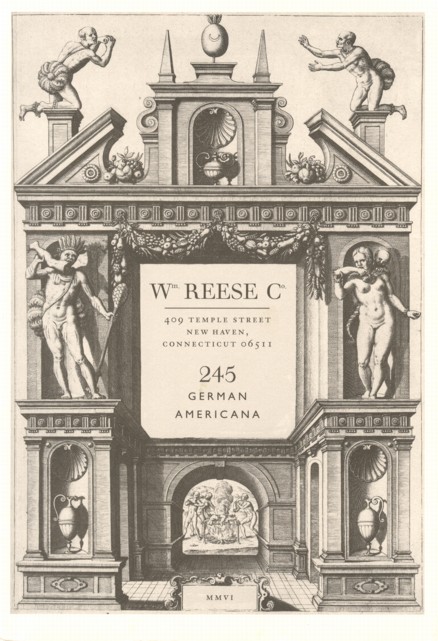 Americana seller William Reese Company has issued a catalogue dedicated specifically to German Americana. This includes publications written in German, books by German authors, books by or about German travelers, German translations of books originally published in other languages, and the like. What they all have in common is a connection to America, and another to Germany. The books date from as early as 1518 to as late as 1900. The earliest ones may have only tangential connections to America. Not much was known about the land then. Many later ones relate to German immigration to America, of which there was a great deal, especially during the 19th century. These books range from early Moravian missionaries in Pennsylvania, to utopian communities in the Midwest, to the German communities settled in Texas after the Mexican War. German Americana is not always that easy to locate. Those who collect in this field will welcome a chance to read Reese catalogue number 245, German Americana.

The Bible is the most printed book in the world, so consequently most are not particularly collectible. Here is an exception. Item 15 - Biblia - was printed in Germantown, Pennsylvania, in 1743. Printer Christoph Saur was a German native who settled in Germantown and practiced medicine before turning to printing. What makes his German Bible special is that it was the first Bible in a European language printed in America. It was preceded only by John Eliot's Indian Bibles. This first Bible is priced at $11,000.

You don't need to be fluent in German to translate the title of item 25: Buffalo Bill und sein Wilder Westen. Carl Henckel put together this 1891 portfolio of images of the "wilder westen" for one of Buffalo Bill's European tours. Bill was a big hit in Europe, Germany in particular. This item includes 14 western images and an introduction to Mr. Cody by Henckel. $1,250.

Baron Manfred von Richtofen, also known as the Red Baron, was one of the greatest flying aces of all time. Serving the German Air Force during the First World War, he shot down countless allied planes. Not even Snoopy was ever able to stop him, though in reality he was struck by a bullet while flying a mission in 1918 and died shortly after an emergency landing. But, who was the Baron's father? The answer is Baron Walter von Richthofen. The earlier Baron spent time in America, Colorado in particular, raising cattle. He evidently was an enthusiastic supporter of American ranching and in 1885 published this book: Cattle-Raising on the Plains of North America. This may not have been as exciting as air combat, but was undoubtedly much safer. Item 114. $600.

How many books translate Tlinkit to German? Probably not many, but here is one: Die Tlinkit Indianer. The 1885 German book by Aurel Krause reports on this Native American tribe (more often spelled "Tlingit"). They live in southernmost Alaska and northwest Canada. The Tlinkit language is one of the Athabaskan languages, shared not only by some of their neighbors in the far north, but by the Navajo and Apache Indian tribes of the American Southwest. $500.