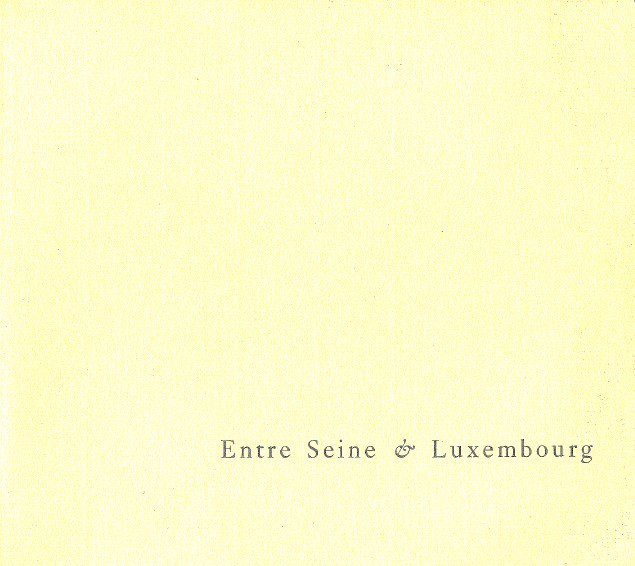 Parlez-vous francais? I don't, which makes reviewing this interesting new concept in catalogues very difficult. Four Parisian booksellers have joined together to publish a catalogue titled Entre Seine et Luxembourg. Such a joint effort is new to us, but unfortunately, this writer is not fluent in French. Therefore, I really cannot tell you very much about it.

From my limited high school French, I will translate the title to "Between the Seine and Luxembourg." The Seine, of course, is France's famed river, which runs through the heart of Paris. I'm not entirely sure why this title, which describes the northeast corner of France, but it may reflect the location of the four booksellers. Whatever the reason, the illustrations within the catalogue imply some very interesting material, but since most titles are French, and all descriptions are in French, I am lost to provide much help. However, for those who do speak the language, here are the four Parisian booksellers who form the publishing quartet: Thomas-Scheler, Pierre Saunier, Thierry Corcelle, and Lacointre-Drouet. You may want to contact one of them for a copy, or a better description than I can provide.

Fortunately, we also received a list of books offered at the recent ABAA book fair in California by Thomas-Scheler, which contains descriptions in English. Instead, I will describe a few of these items. However, these are not entirely similar. The items in this list tend to be at the very upper end of collecting, while items in the cooperative catalogue are at more modest pricing levels. Here are some samples of what Thomas-Scheler had to offer.

Item 10 is Procede pour ecrire les Paroles, la Musique et le Plaint-chant au moyen points...by Louis Braille. Even those who cannot read French will recognize that name. Louis Braille developed the system of raised symbols on paper that allow the blind to read by touch. Earlier raised symbol systems had been used, but these had been based on sounds. Braille was able to create an alphabet using half a dozen dots that allowed for true reading. This book, published in Paris in 1829, sets forth the principles of his system. It is the basis for Braille writing still used today. Priced at $80,000.