Some Unusual New Arrivals at Between The Covers Rare Books 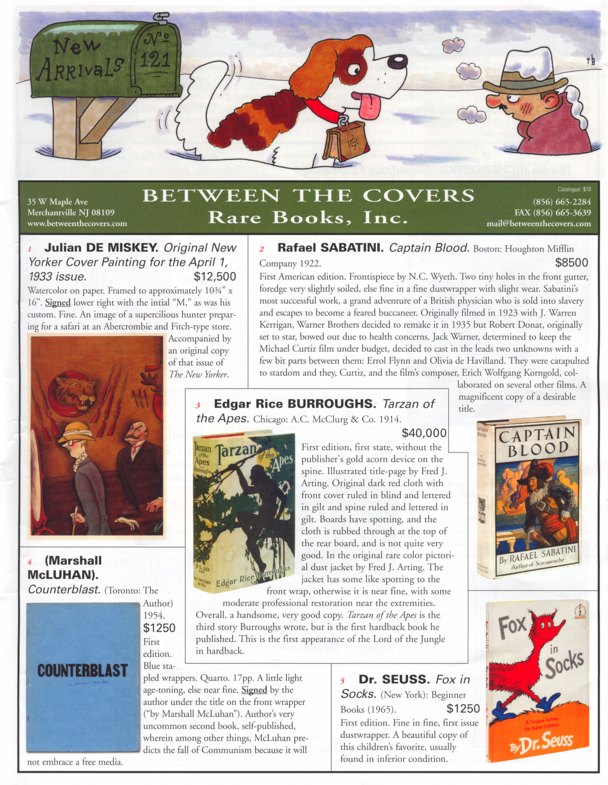 Some Unusual New Arrivals at Between The Covers Rare Books

Between The Covers Rare Books has issued a catalogue of New Arrivals, number 121 for the Merchantville, New Jersey, bookseller. Most of the books they offer fall under the category of literature, and this catalogue is no exception. However, a few others items managed to sneak into this one. Here are a few of the 99 "new arrivals" at Between The Covers.

What would you expect to be the most valuable item in a catalogue offering first editions of such titles as The Grapes of Wrath and Catch 22? The answer is Tarzan of the Apes, by Edgar Rice Burroughs. Tarzan may not be recognized as one of the greatest ever of literary achievements, but then again, did Disney ever make a cartoon out of Grapes of Wrath? Published in 1914, item 3 in this catalogue is a first edition, first state of the first hardback Tarzan book. It is available to whoever brings the first $40,000.

Now for a real literary masterpiece. What can compare to Dr. Seuss' tongue twister, Fox in Socks? The good doctor was in a class by himself. Item 5 is a first edition in first issue dust jacket of this Seuss classic. $1,250.

He was both one of the most loved and most despised of sports figures in American history. Jack Johnson won the heavyweight boxing championship, when this was the most coveted of sports titles, in 1908. Johnson was a black man in an era when much of the white population could not accept a black being equal, let alone superior in anything so important. He only managed to get a title shot by following the champion around, taunting him until he gave in. Following his victory, Johnson defended his championship against a series of "white hopes" before finally succumbing to a challenge at the age of 37. What made Johnson even more despised by the white public, who would accept the accommodating Joe Louis a couple decades later, was that Johnson refused to play a subservient role. He did what he wanted, went where he pleased, and worst of all, consorted with white women, marrying three along the way. He was jailed for a year in 1920 for a violation of the Mann Act, supposedly transporting women over state lines for immoral purposes (he sent his white girlfriend a train ticket). Despite the hostility and threats that surrounded him, Johnson never backed down, and never stopped smiling at his opponents. Item 73 is Jack Johnson -- In The Ring -- And Out. It is Johnson's autobiography, with introductions by Damon Runyan and Mrs. Jack Johnson. This copy is signed by Mr. Johnson. $2,850.

Item 18 is a most unusual association copy. It is a first edition, first issue (with dust jacket) of The Good Earth, inscribed by author Pearl Buck. The 1931 book was inscribed to Richard Walsh, who published her first works. Four years later, Buck would marry Walsh, her second husband. $30,000.