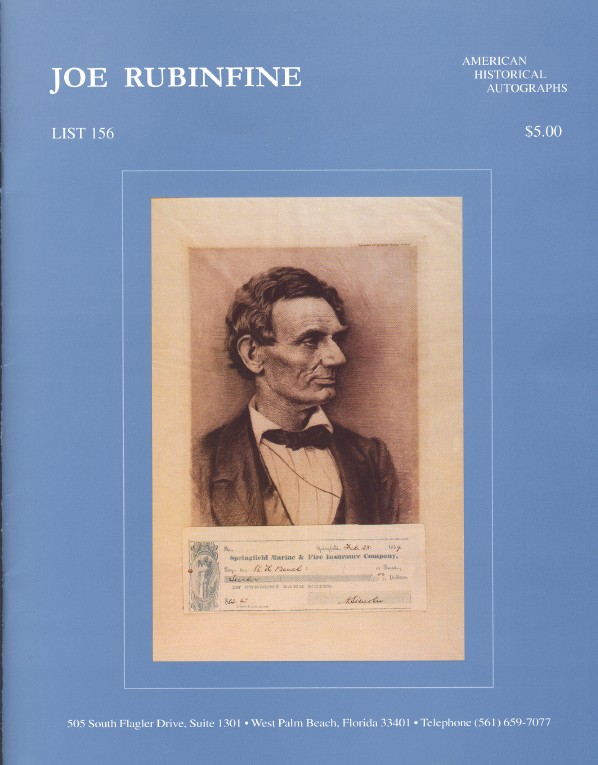 Joe Rubinfine has issued his List 156 of American Historical Autographs, and there are some real gems in this one. There are some standard autographs of famous people, a few manuscripts from not as well-known people who took part in notable events, but then there are some documents from major personalities pertaining to important events. These, quite simply, are significant historical documents. We'll take a look at a few of these interesting documents within what is a most noteworthy collection of signed Americana.

Item 13 pertains to President Andrew Jackson's momentous change of cabinet officers in 1831. At the time, it was subject to debate whether the President even had such authority, a question which would arise again during the Reconstruction presidency of Andrew Johnson. However, Jackson never had to forcibly remove anyone. Jackson's original cabinet consisted of both his supporters and some of Vice-President John Calhoun. However, a rivalry developed between the Vice-President and Secretary of State Martin Van Buren, and as Calhoun turned toward support of nullification (allowing individual states to ignore federal laws), Jackson's support turned more and more to Van Buren.

When a social incident gave Jackson the opportunity to do away with Calhoun's supporters in his cabinet, he jumped at it. Most members of the Cabinet ostracized the apparently flirtatious wife of Secretary of War John Eaton. The result was Eaton and Van Buren, his only supporter in the Cabinet, resigned. This gave Jackson the opportunity to call on other cabinet members to resign as well. Item 13 is Jackson's resignation acceptance letter to Secretary of the Treasury Samuel Ingham, a Calhoun loyalist, dated April 20, 1831. In this very polite letter, Jackson alludes to the fact that his resignation was less than voluntary. Jackson explains that when Van Buren and Eaton resigned, he felt compelled to make a complete change in his cabinet. He states that "...to permit two, only, to retire would be to afford room for unjust misconceptions and malignant misrepresentations concerning the influence of their particular presence upon the conduct of public affairs -- justice to the individuals whose public spirit had impelled them to tender their resignations also required then, in my opinion, the decision which I have stated however painful to my own feelings, it became necessary that I should frankly make known to you my view of the whole subject." In other words, you have done nothing wrong, and it pains me grievously to get rid of you, but circumstances beyond my control require it. So goodbye. Jackson then concludes by telling Ingham what a wonderful job he had done, that he has "...my best wishes for your prosperity and happiness..." And with that, Jackson was rid of Calhoun's supporters from his cabinet. The following year, Calhoun was removed from the Democratic ticket and Van Buren was elected vice-president in his stead. $18,000.