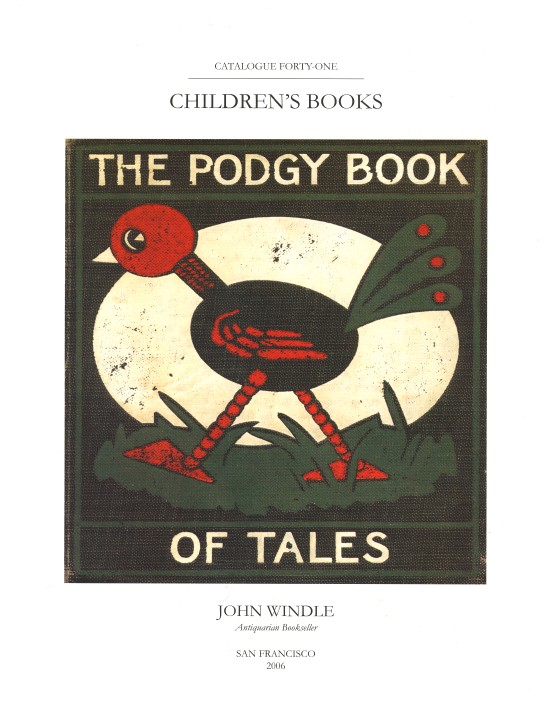 John Windle Antiquarian Bookseller's 41st catalogue is dedicated to our childhood. It is entitled Children's Books. This catalogue will bring you back to the days of your youth. Well, not really. These children's books are mostly from the 19th century or early 20th. You would have to be really old to have read these books as a child. Certainly some of the stories will be familiar, as they were republished again and again. We all grew up with big bad wolves and bears in three sizes. Other stories, such as one which tells us how to distinguish a parrot from a carrot may be cute, but didn't stand the test of time. No matter. This catalogue is filled with magical tales and the innocence of youth. We cannot go back, but we can look back. Windle is ready to take us on a trip through time to the days when we were very young.

Item 34 takes us all the way back to the time before Goldilocks' hair turned gold. Unlike most people, whose hair turns from gold to silver as they get older, Goldilock's hair changed from silver to gold. When Routledge published The Three Bears, with illustrations by Walter Crane, the lead human character's name was still Silverlocks. Perhaps those of you over 133 already knew that, but I was never aware that Goldilocks was ever anything but Goldilocks until I picked up Windle's catalogue. Priced at $550.

Here is a title you may not instantly recognize: The History of Mother Twaddle and the Marvellous Atchievements of her son Jack, by H.A.C. You will instantly recognize that winning spelling bees was not among Jack's achievements. However, Mother Twaddle's boy was a good climber. This is the first American edition of the story we know better as "Jack and the Beanstalk." The year was 1809 when this classic was first published in Philadelphia. Item 54. $6,750.

Item 73 may be another first appearance. Circa 1813, and published in London, it is Peter Piper's Practical Principles of Plain and Perfect Pronunciation. This is either the first or a very early edition of this book of tongue twisters. It provided the first recitation of the famous line, "Peter Piper picked a peck of pickled peppers." $1,750.