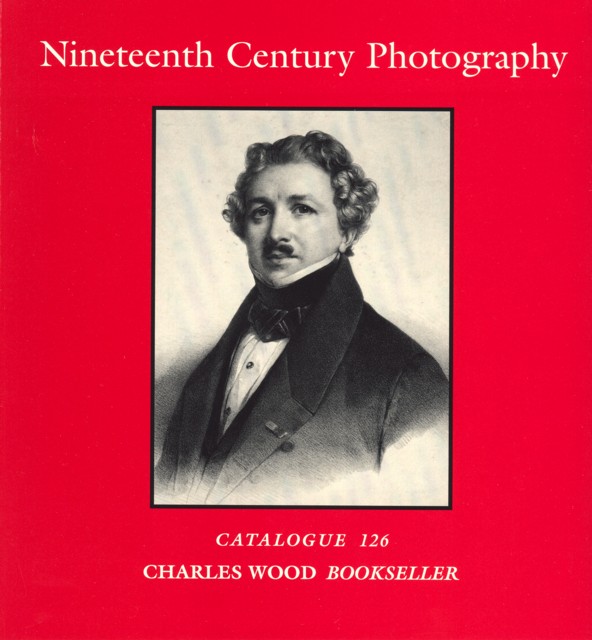 If a picture is worth a thousand words, it will be impossible to do Charles Wood Bookseller's latest catalogue justice. Catalogue 126 is titled Nineteenth Century Photography. Photography was not developed until the 1830s, and it was around mid-century that the first books to use photographic images began to appear. By the time of the American Civil War, the process had become so common and developed that its images could be used to save and record even ordinary events for history. Whereas none of America's founding fathers could have their photographic images preserved for future generations to see, the commonest of Civil War foot soldiers could. Even then, technology was marching forward at a rapid pace.

Of course, these advances were in no way limited to America. The earliest developments were taking place in France, starting with Joseph Nicephore Niepce's first photograph of 1826, followed after his death by partner Louis Daguerre's Daguerreotype process patented in 1839. Wood's collection of photographs and photographic books is international in scope, though he is an American bookseller. Here are a few of the items he offers.

So, if this is a catalogue of nineteenth century photography, and photography wasn't even invented until the 1800s, what is a 1799 book doing in here? The answer is that Deportation et Naufrage... by Frenchman J.J. Ayme created its images using a process called "physionotrace," a precursor to photography. This process allowed for an exact tracing of a person's profile, wherefrom an artist could fill and color the details. Item 9. Priced at $550.

As long as we find ourselves focused on France, here's one more: Les Travaux Publics de la France, from Leonce Reynaud. This is a five-volume set containing photographs of France's various public works from the 1850s to the 1870s, published by Baron James Rothschild from 1876-1883. Each volume contains 50 collotype images (a process which created printed images which look much like photographs). Wood notes that the books not only provided a history of French public works, but that the photographs reflected the vision and settings of an artist as much as a photographer. Item 181. $25,000.

Leander Cook was an itinerant photographer, probably based in the Boston area. Item 36 is a circa 1860s broadside headed "Pictures! Pictures!" Cook posted to announce he would be in an area. Anyone wishing their picture taken, or to purchase frames and albums, were invited to visit his "traveling saloon." He encourages parents to "Bring the little ones as near noon as possible, and in a clear day, on account of the light." Evidently "saloon" had a different meaning then if you were supposed to bring the children. $550.