A Variety of Books from John Michael Lang 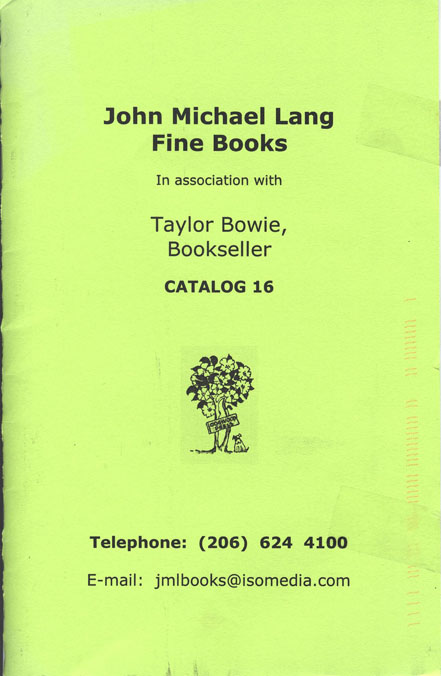 A Variety of Books from John Michael Lang

This is our first review of a catalogue from John Michael Lang Fine Books of Seattle, Washington. This, their 16th catalogue, was prepared in association with Taylor Bowie, another Seattle bookseller. This is not an easy catalogue to pigeonhole. There are literature, history, children's books, Westerns, etiquette books, cooking, and more. Here is a catalogue in which a $75,000 book can sit next to a $25 one. I guess we'll just have to say this is a catalogue of books, and not try to get more specific. So, if you collect books, maybe what you are looking for is here. Now for a few of the many titles Lang is offering.

We will start with item number 1, the $75,000 item. This is a 1493 first edition, in Latin, of Liber Chronicarum, the Nuremberg Chronicle. Edited by Hartmann Schedel of Nuremberg, this was a massive undertaking to describe the history of the world less than four decades after the invention of the printing press. It starts from Creation and includes an outlook of the end of the world, along with everything in between. Its large folio pages are filled with pictures, including one of Pope Joan, whose image was not defaced as in many copies. Pope Joan was the legendary female pope, accepted by many at the time as a real, historical figure, but now generally considered a figment of imagination, an urban legend of its rural time. Some of the illustrations are believed to have been created by Albrecht Durer, a legendary artist who was quite real.

Here is another man associated with Nuremberg, but not in the positive, honorable manner of Schedel. Item 65 is Inside the Third Reich, by Albert Speer. Speer was Hitler's architect, associate and friend, who denied knowledge of the ongoing Holocaust, but who likely knew what was going on but tried to look the other way. Like other Nazi leaders still living after the War, Speer was tried for war crimes at Nuremberg, specifically the use of slave labor. He was the exception among the defendants in expressing remorse, and received the relatively light sentence of 20 years, enabling him to live his last 15 years in freedom. This 1970 first edition of Speer's book, signed and inscribed by the author, is priced at $1,500.

Thomas "Boston" Corbett was the Jack Ruby of another generation. Ruby, of course, was the killer of Lee Harvey Oswald, John Kennedy's assassin. Corbett was the man who killed John Wilkes Booth. He was already a person with evident mental problems when he was selected among a group of 26 men to track down and capture Booth alive. Corbett was the ultimate "mad hatter," hat-making being his trade. After the death of his wife, he became a very fundamental Christian, to the point of growing his hair long in attempt to look like Jesus. He became concerned he would fall to the temptation of prostitutes and so took the natural step for those whose minds operate a little differently from most; he castrated himself with a pair of scissors. Corbett joined the Union army during the Civil War, rose to the rank of sergeant, spent time in the notorious Confederate prison at Andersonville (which probably did not help his mental health), then returned to the army after his release. He achieved his fame when sent to capture Booth.