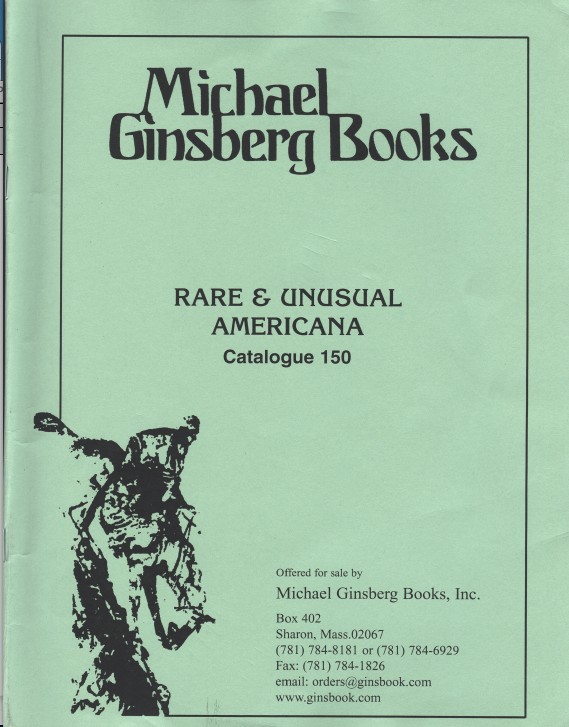 We have received our first catalogue from Americana bookseller Michael Ginsberg Books, of Sharon, Massachusetts. This is Ginsburg catalogue 150 of Rare and Unusual Americana. Both of those terms apply well to Ginsburg's collection, which is filled with the unexpected and unusual. For example, how did a collection of 1870s Alabama state documents end up in Massachusetts of all places? It includes everything from reports of the Governor, Treasurer, and Superintendent of Public Instruction, to those of the Inspectors of the Alabama Penitentiary, Officers of the Freedmen's Hospital, Officers for the Alabama Institution For the Deaf and Dumb and Blind, and the Officers of the Alabama Insane Hospital. You can even read about pardons issued by the Governor and his reasons for granting them. Item 3; priced at $1,000. Here are a few more of the items in Ginsburg's latest catalogue.

This is one more interesting southern item: The Interest in Slavery of the Southern Non-Slaveholder. The Right of Peaceful Secession. Slavery in the Bible. This 1860 Charleston item, by James DeBow, touches on one issue that had the potential to divide the South, and make secession, as well as the long-term prospects for the continuation of slavery, untenable. The issue was that most southerners were not themselves slaveholders, and had little personal interest in the institution that they would be called upon to make great sacrifices to defend. A few southerners even argued that slavery was bad for most small white farmers, who were forced to compete against large plantations which had the benefit of unpaid labor. It was essential to the secessionist cause that those who did not own slaves believe they had an interest in maintaining slavery. Item 65. $500.

The last item was an argument to poorer southerners, attempting to convince them that something not apparently in their interest really was. Item 159 is a northern attempt at a similar argument directed toward the South. Item 159 is Profits On Manufactures at Lowell. Letter from the Treasurer of a Corporation to John S. Pendleton, Esq. Virginia, by Thomas G. Cary, published in Boston in 1845. At that time, there was much resentment in the South toward tariffs designed to protect American manufacturers, who were overwhelmingly located in the North. The tariffs raised prices on goods needed in the South, while inviting retaliatory tariffs on southern cotton shipped to foreign lands. In this pamphlet, Cary argues that the tariffs, by protecting American textile manufacturers, who used southern cotton, had the effect of protecting their southern cotton suppliers as well. Cary also claimed that the images of great wealth possessed by northern manufacturers were greatly exaggerated. This is a presentation copy from the author to "Hon. John Quincy Adams," a former president serving in Congress at the time. $475.