Important Signed Documents and Autographs from The Raab Collection 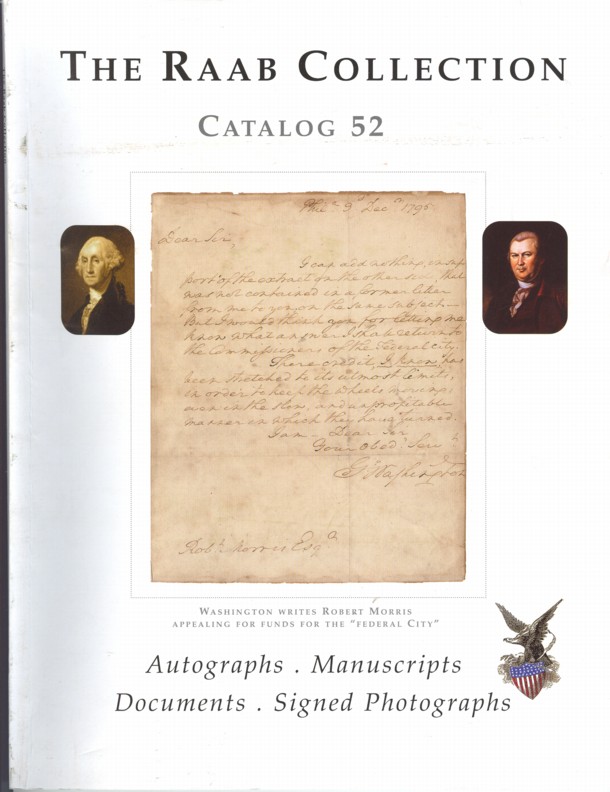 Important Signed Documents and Autographs from The Raab Collection

Just released is Catalogue 52 from The Raab Collection. Raab offers autographs, manuscripts, and other signed items. Most signers are either household names or people who played important roles in history. Many documents touch on major historical events. While most of the personalities represented are American, that is not a limitation. Raab offers signed items from a couple of British queens (Victoria and the current Elizabeth), and a man who is French and yet also American (Lafayette). Here are a couple of the fascinating signed documents Raab is offering this month.

Some letters are difficult to write, and this one must have pained George Washington immensely. It was written to Robert Morris, a patriot who had helped Washington during the Revolution, and grew to be America's largest landowner. As something of a financial wizard, he raised funds during the war, including those necessary to help Washington move his troops south to Yorktown for the decisive victory. At times he even took out personal loans to finance the cause. After the war, Morris, a believer in western expansion, purchased vast sums of land on the frontier. At one time he controlled 8 million acres, borrowing everywhere he could to speculate in the new land. He also purchased 7,000 lots on credit in the newly developing Federal City, a favorite project of Washington that would, in a few years, bear his name. Unfortunately, Morris was stretched thin, and when it came time to pay for the lots, he lacked the funds. The District Commissioners prevailed upon the President to write his friend Morris, urging payment. Washington did, and Morris provided assurances he would pay up shortly, but failed to do so. That led to this signed second letter from Washington to Morris, item 3 in the Raab catalogue. In it, a more terse Washington says, "I can add nothing...that was not contained in a former letter from me to you on the same subject. But I would thank you for letting me know what answer I shall return to the Commissioners of the Federal city. Their credit, I know, has been stretched to the utmost limits..." The letter is dated December 3, 1795. It is priced at $68,000. Morris would respond four days later explaining he did not have the money, but was attempting to raise it. Raab notes that this event chilled the longtime friendship between Washington and Morris, and there apparently was very little communication between the two old comrades in the remaining years of Washington's life.

Item 5 is the letter that notified Thomas Johnson that he had been appointed just the sixth justice of the U.S. Supreme Court. Johnson had nominated George Washington to be commander-in-chief of the Continental Army in 1775, and organized and personally led a militia to support Washington when he was in difficult straits early in the war. Therefore, it was not surprising that Washington would nominate this former Maryland governor, judge, and member of the Maryland convention that ratified the Constitution to the federal bench. Washington's nomination of Johnson was quickly ratified by the Senate, and on November 10, 1791, he received this letter notifying him of his appointment. The letter is signed by then Secretary of State Thomas Jefferson. $38,000. As it turned out, Johnson didn't much like the job which, at the time, required much circuit riding, and resigned just 14 months later. However, he did write the first recorded U.S. Supreme Court decision, in Georgia vs. Brailsford.