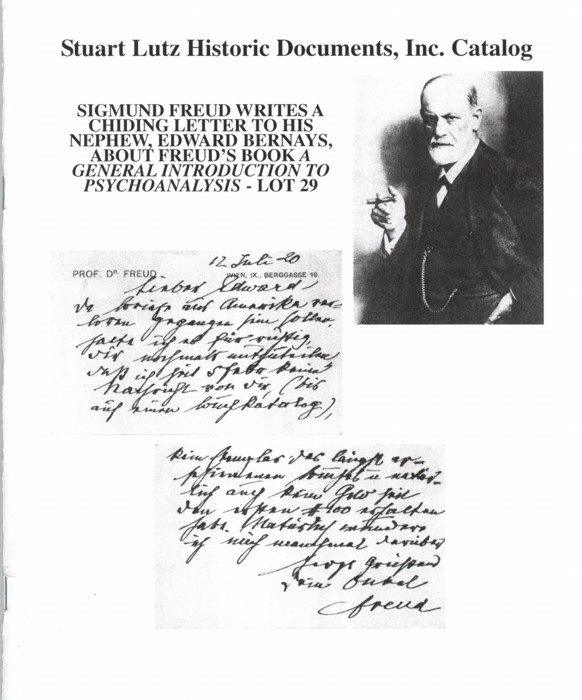 This is our first review of a catalogue from Stuart Lutz Historic Documents, and this is a most intriguing collection. These are primarily signed documents from people you know, either by name or by their role in history. Some of the documents are significant, others are mundane, such as checks or form-like letters. The advantage of the latter category is that they give you a chance to collect signatures and inscriptions from famous people at ordinary prices. This is an exciting catalogue for those who collect one-of-a-kind documents and autographs. Here are some samples to show you what we mean.

Here's an item book lovers should appreciate. It is a signed photograph of Andrew Carnegie. Carnegie was one of the world's richest men at the turn of the century. He was a railroad tycoon who parlayed his winnings into even more money in the steel industry. When he retired, he employed a healthy chunk of that money to support the building of public libraries all across the United States. The countryside is still dotted today with the Carnegie libraries this believer in books and education made possible. Signed photographs of Carnegie are uncommon, but item 12 of this catalogue is an example. Priced at $650.

If Carnegie wasn't rich enough to impress you, how about getting a check from the man so wealthy he could buy Carnegie out? That man was J. Pierpont Morgan, a banker and industrialist whose U.S. Steel bought out Carnegie's steel interests. Morgan, too, had made a fortune in the railroad industry as well as banking. While owning a check from Morgan sounds like a ticket to retirement, this one is for collecting purposes only. You are unlikely to be able to cash it since it is dated June 29, 1874. Banks usually only honor those things for about six months, and besides which, Morgan already signed and cashed it. The amount was $1,112.50, a nice amount today, a small fortune in 1874. Your price is just $600.

Item 75 is what Lutz describes as "a very large Taft photograph." It better be large. At 300 pounds, William Howard Taft was the biggest man ever to serve as president. Taft signed this one late in his career when the ex-president was serving on the Supreme Court. It is inscribed "For my friend Arthur Capper of Kansas, U.S. Senator..." $650.

Father Divine was a charismatic preacher back in the days before television made it easy for such individuals to reach large audiences. It didn't matter. Father Divine gathered a huge following anyway. Amazingly, though a black preacher at a time when segregation ruled the land, he still managed to achieve a loyal, interracial following. In this 1952 letter to a Miss Titus Praise, Divine promises spiritual help for her illness, while wisely providing medical backup just in case. Pens Divine, "If you will keep the faith, MY SPIRIT can heal you. However, if you have not completely overcome the condition, it would be your privilege to consult a physician, as you may not be eating properly or over indulging in such things as would be detrimental to your physical system." Father Divine then signs off, "...I AM Well, Healthy, Joyful, Peaceful, Lively, Loving, Successful, Prosperous and Happy in Spirit, Body and Mind and in every organ, muscle, sinew, joint, limb, vein, and bone and even in every ATOM, fibre and cell of MY BODILY FORM." No wonder this charismatic man gathered such a large and loyal following. Father Divine died in 1965, and there is not much left of his International Peace Mission, as the movement was called, but it still continues today under the leadership of his younger second wife, Edna Rose Ritchings, also known as "Mother Divine." His letter to Miss Praise is item 22. $300.