Modern and Traditional Poetry and Literature from Alexander Rare Books 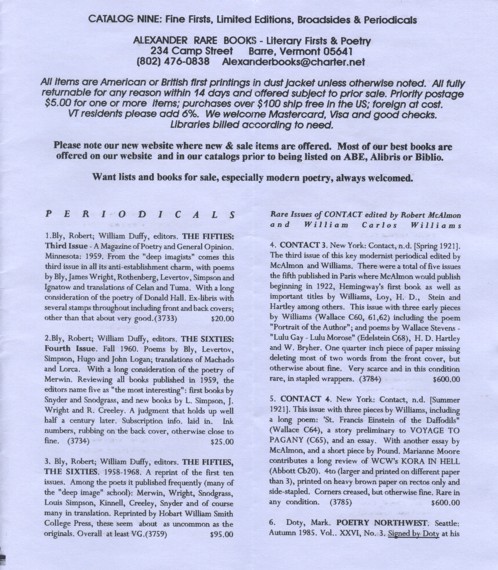 Modern and Traditional Poetry and Literature from Alexander Rare Books

Alexander Rare Books has issued their ninth catalogue of Literary Firsts and Poetry. This catalogue is filled with works from modern, or at least relatively so, poets. This leads to a confession that is difficult for any reviewer, but here goes: I know nothing about modern poetry. Like everyone else, I learned some poetry in school, but that was too long ago for anything modern to have existed. The result is I'm basically stumped on what to say, or what to show as examples. Therefore, whatever follows should be considered faking it. Like a politician, I will try to speak authoritatively, but also like a politician, I have no idea what I am talking about.

Fortunately. Alexander Rare Books has prepared a catalogue with many of these works, and they provide explanations. Besides which, I am sure that those who collect modern poetry know who the good poets are, and what it is they want. Such collectors surely don't need my advice. What I can say is that you do not need to be wealthy to collect this material (but it is all right if you are). A modest amount of money and an Alexander catalogue will get you on your way. For purposes of this review, I will stick primarily to some of the older names that I recognize from back in the Dark Ages when I was young.

Even I know Robert Frost. Snow in New England. Nothing modern about him. Item 8 is a copy of The New Hampshire Troubadour from November 1946. This edition is known as "the Robert Frost Issue." It includes essays from people who knew the poet along with numerous photographs. It also contains the first printing of his poem Our Gateway, later printed under the title Why Wait for Science. This copy was inscribed by Frost. Priced at $400.

Item 9 is another magazine edition devoted to Frost. This is the February, 1939, issue of The Touchstone, published for the Amherst College community. Through much of his life, Frost was a professor or, at least, a part-time lecturer at Amherst, which named its library for him in 1962. This issue includes photographs of Frost and reminiscences of his years at the college by former colleagues and students. $50.

Poet Edna St. Vincent Millay was deeply concerned by one of the major trials of the day. Nicola Sacco and Bartolomeo Vanzetti were a couple of Massachusetts anarchists when they were arrested in 1920 for robbery and murder. Their guilt or innocence has been debated ever since, but one thing that seems clear is that who they were, rather than strictly the evidence, played a significant role in their conviction and inability to get a retrial. Both their radical politics and Italian heritage weighed heavily against them. Seven years later, both were executed. Millay published one poem, Justice Denied in Massachusetts, the day after their execution. Two months later, she published the poem that is offered as item 33, Fear. This unfolded, almost fine copy is priced at $150.