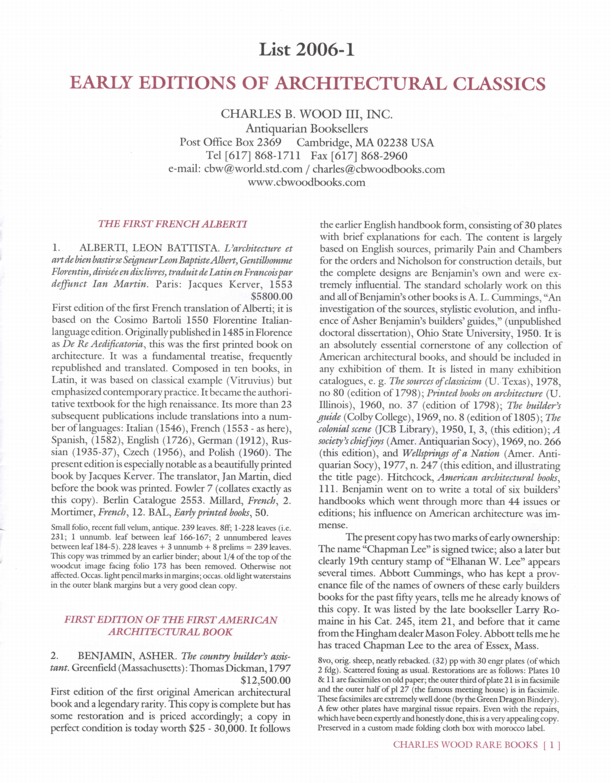 Charles B. Wood Rare Books has issued a list of twenty-six Early Editions of Architectural Classics. Architectural books is one of Wood's specialties, and those who collect in the field will be most interested in these items. Some date back as early as the 16th century, some of the oldest titles in the field. Here are a few of the books from this brief, though very thoroughly described, list of titles.

Item number 1 is the oldest of architectural titles: L'architecture et art de bien bastir se Seigneur Leon Baptitse Albert... This is the first edition of the first French translation of this architectural classic, published in 1553. Leon Battista Alberti originally published this book in Latin from Florence in 1485. It was the first printed book on architecture. This French edition was translated from the 1550 first Italian edition. The book has gone on to be republished many times in many languages. The first Spanish was published in 1582, English in 1726, German in 1912, and it was not published in Polish until 1950, four centuries after this edition. Priced at $5,800.

Item 2 is the first American architectural book. This is a first edition of the 1797 The Country Builder's Assistant, by Asher Benjamin. This book was based on earlier English works, but Benjamin contributed his own designs. Benjamin went on to publish several more texts, and was very influential on American architecture. Wood describes this book as an "essential cornerstone" to any American architectural collection. This copy has had some restoration work, and is priced accordingly. $12,500.

Item 14 is an important work for 19th century Greek revival architecture. The book is The Antiquities of Athens, Measured and Delineated, by James Stuart and Nicholas Revett. Originally published from 1762-1816, this is a second edition published between 1825 and 1830. It may well be more important than the first edition, as Greek revival architecture did not catch on, particularly in America, until after the publication of the second edition. $5,500.

Andrea Palladio was one of the greatest 16th century architects. Born in Padua, Italy, and apprenticed as a stonecutter at a young age, Andrea di Pietro della Gondolla moved to Vicenza where a patron introduced him to fine arts and gave him the classic-sounding name "Palladio." His work was of a more classical style than typical of the Renaissance, but was still quite popular. Many of his buildings still survive, and his designs are on exhibit at many museums and galleries today. Thomas Jefferson was a great admirer, and his Monticello and the University of Virginia were influenced by Palladio's work. Eight Palladian works are offered in this catalogue, dating between 1679 and 1796. Among these is a 1729 edition of the rare Andrea Palladio's Five Orders of Architecture...Revised by Colin Campbell. Campbell died after only the first book was published, and another translation, which was completed soon thereafter, superceded this version. Item 6. $3,500.