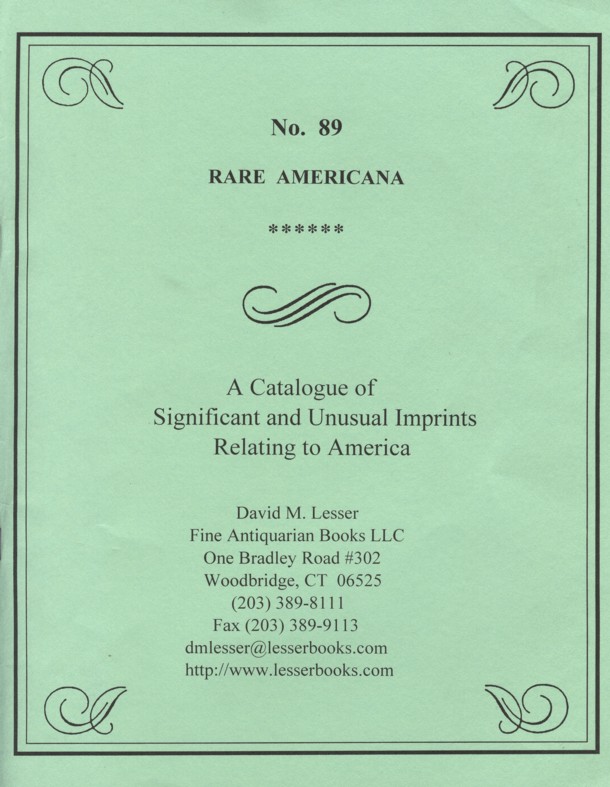 David M. Lesser Fine Antiquarian Books has published its newest catalogue of Rare Americana, number 89 for the Woodbridge, Connecticut, bookseller. Lesser offers primarily 18th and 19th century Americana, with a concentration of material from the late Colonial period to the Reconstruction era. What distinguishes the items you will find in a Lesser catalogue from most other Americana sellers is it is primarily unusual or short run material, pamphlets, catalogues, legal arguments, sermons, government records and the like, rather than what we typically think of as "books." This is material which can give you a real look at life as it was seen at the time, rather than as seen though the prism of hindsight. We see America at both its best and worst, her strong and principled people, along with her vain and prejudiced. If you collect printed Americana, Lesser's catalogues are an adventure. We will take a peak inside number 89.

What did people do before they had Court TV and Nancy Grace to entertain them? The answer is they read books like the Trial of Daniel Davis Farmer, for the Murder of the Widow Anna Ayer, at Goffstown, on the 4th of April, A.D. 1821. Goffstown is located in New Hampshire, and this book by Artemas Rogers and Henry B. Chase, reporters, was published in Concord in 1821. As a young man, Farmer had worked part time for the widow Ayer. They reportedly had some minor differences, but nothing serious until 1821 when Ayer accused Farmer, now 28, married, and the father of four children, of being the father of her prospective child. We do not know whether there was any truth to this accusation, but it certainly made Farmer quite angry. On April 4, 1821, Farmer went to the widow's home, beat her and her 14-year-old daughter senseless with a wooden club, and set the house on fire. He evidently thought the fire would cover up their killings, but the women awoke, and the daughter was able to put out the fire. The widow Ayer died a week later, but the daughter survived to testify at trial. This is the story of the murder, but we have a postscript to add. This copy is signed on the front wrapper, "Gov. Bell." This is likely a copy belonging to New Hampshire Governor Samuel Bell. At the October trial (it was postponed until the daughter recovered sufficiently to testify), Farmer was convicted and sentenced to hang. In December, Governor Bell granted Farmer a one-month reprieve. However, that served only to delay punishment. On a bitterly cold January 3, 1822, in front of reportedly as many 10,000 people, Farmer was hanged on the Goffstown Common. Rogers and Chase's report is item 117 of the catalogue, priced at $275.

There were many spurious arguments raised to justify the institution of slavery, but give John M. Galt credit for one of the stranger ones. Mr. Galt, superintendent and physician, published A Letter Touching the Management of the Eastern Lunatic Asylum, Williamsburg, Virginia... in 1857. He was, perhaps, on the wrong side of the fence. He proves the institution's "uniform kindness to our insane inmates" by noting "no menial duties are performed by any white person." Those are "performed by the slaves in each ward." Fortunately, Mr. Galt is able to point out that there are not many insane black people, because of "the general principle that insanity was diminished through the influence of the institution of slavery." Why Mr. Galt did not apply this principle to cure the white insane, and just where he got his M.D. anyway, are not clear. Item 56. $650.