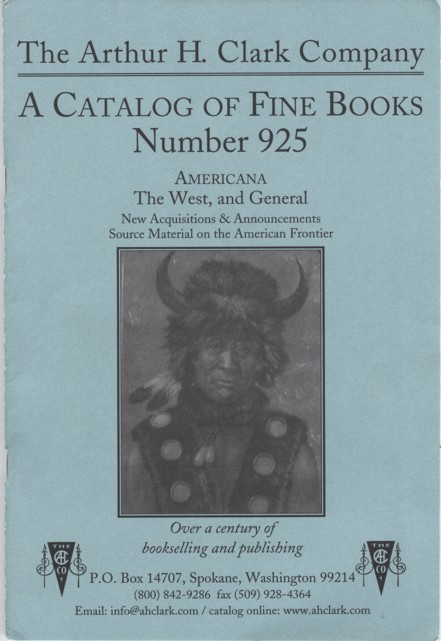 We recently received catalogue number 925 from The Arthur H. Clark Company of Spokane, Washington. They have been in the business now for over a century, but by my math, that still comes to a catalogue about every 40 days. Obviously, they have had a long time to perfect this process. As usual, number 925 is an interesting collection of Americana, with a focus on the West, plus a few other topics thrown in for variety. Here is a brief look at the 342 items within this latest of a long line of book catalogues.

It was America's first major arctic exploration, and it proved to be both a success and a horrific disaster. As part of the first International Polar Year, the United States sent out an expedition to make observations and record the weather (cold) in the far, far Canadian North of Elsmere Island. Twenty-five men, under the command of Lieutenant Adolphus Greely, set up shop in Fort Conger, on Lady Franklin Bay (named for the widow of an earlier Arctic explorer who lost his life searching for a northwest passage). They arrived in 1881 and all went according to plan. Unfortunately, bad weather prevented their supply ship from reaching the men in the summer of 1882. Nevertheless, they stuck it out. However, when supplies again failed to reach them in the summer of 1883, Greely made the decision to abandon the fort and use their small boats to head south. They made it 500 miles down the coast of Ellsmere Island before winter conditions forced them settle at Cape Sabine. By this time, many of the men, including the staff physician, were in virtual mutiny against Greely, who despite what would later be a long and distinguished career, was not well trained for dealing with arctic conditions. The men had headed south with 40 days worth of food, and now had to winter over. Hunting and fishing only brought in meager rations, and the men began to starve. What followed was horrific conditions of starvation, freezing, and cannibalism. By the time they were rescued the following year, only six, including Greely, had survived. Item 160 is Adolphus W. Greely's International Polar Expedition: Report of the proceedings of the United States Expedition to Lady Franklin Bay, Grinnell Land, published in 1888. Priced at $175.

Alaska is a fairly cold place too, but for a couple of days in 1912, part of the Alaskan peninsula was heated by one of the most spectacular volcanic eruptions in recorded history. Ten years later, Robert Griggs published this account, The Valley of Ten Thousand Smokes, for the National Geographic Society. The eruption from Mount Katmai devastated all plant and animal life for miles. Griggs reported that the volcano covered an area the size of New York City with ten to fifteen feet of ash. Furthermore, if New York had been the volcano's site, even Philadelphia would have been under a foot of ash and dark for two and one-half days, and Washington and Buffalo would have had a thin ash covering. Over seven cubic miles of ash were said to have been released into the atmosphere. Item 3. $60.