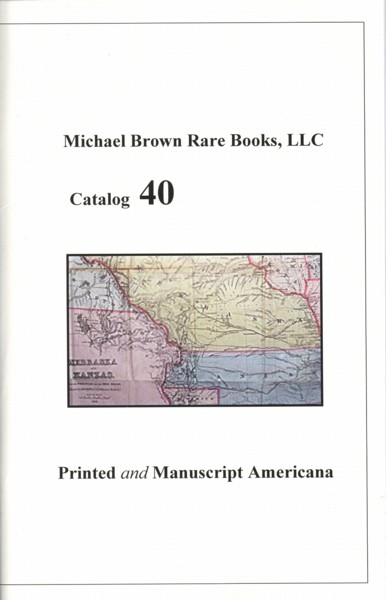 Michael Brown Rare Books has published its 40th catalogue of Printed and Manuscript Americana. There is a wide spectrum of material in this latest catalogue, spanning four centuries and the birth of a nation. Anything American is fair game. If you collect Americana, then it is likely you will find material that is of interest to you. Here are some samples of material being offered.

It was one of the bloodiest mutinies in American history. The whaler Globe set sail from Nantucket Island, Massachusetts, for the Pacific in 1822. Its young captain was enjoying his first command, and apparently his performance reflected this fact. Six sailors abandoned ship in Hawaii in late 1823. It was at this time that Samuel Comstock planned his mutiny. Once back at sea, and with help from several of the new, replacement sailors, Comstock snuck into the Captain's quarters and murdered the man with an axe. Three other officers were similarly despatched. Comstock then set out searching for some small island, where he planned to have himself made king. That island turned out to be Mili Atoll, where the crew disembarked, and Comstock began his attempt to win over the natives with gifts. This strategy proved a mistake. It angered his partner, Silas Payne, who did unto Comstock what Comstock had done to his captain. Meanwhile, six of the innocent crewmen returned to the boat and took off for the long trip back to Chile before the conspirators were aware. Once they arrived and told their story, the Secretary of the Navy ordered a search for the mutineers. That search ship was the Dolphin, and one of its crew was Hiram Paulding. Paulding was the author of item 175, Journal of a Cruise of...the Dolphin...in Pursuit of the Mutineers of the Whale Ship Globe. However, by the time they found the remnants of the Globe's crew, seven of the nine had been killed by the islanders. Only two, innocent non-participants in the mutiny, still survived. The Dolphin stopped at Hawaii on the return trip, and the book also describes that island. It recounts an attack on the Prime Minister's home by crewmen from the Dolphin and other ships to protest a law forbidding native women from "visiting" onboard ships. A "most unpleasant incident," says Paulding. Priced at $2,000.

The American government seems to throw vast sums of money around without much thought, but this was not always the case. In 1829, James Causten published this bitter attack on the American government for nonpayment of debts: View of the Claims of American Citizens, Which were (Reserved against the French Republic...). When America purchased Louisiana from the French in 1803, part of the price was America's agreement to pay off any legitimate claims American citizens held against the French. Now, over 25 years later, those claimants were still trying to get their money, some $4 million at the time. Item 113. $1,250.