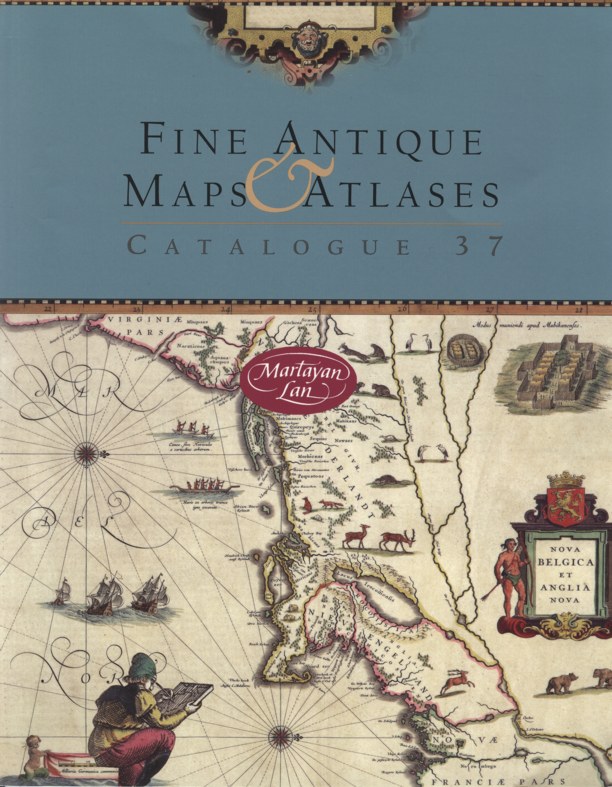 Martayan Lan's 37th catalogue of Fine Antique Maps and Atlases offers 82 items from the 15th through the 19th centuries. The catalogue is actually a trip through time, as it provides a picture of the world as it unfolded before the eyes of western civilization, just emerging from the Dark Ages. Among the maps you will find in the catalogue, besides many of the world, are Great Britain, France, Italy, Ireland, Denmark, Norway, Iceland, all of Europe, Africa, Asia, the Arctic, North and South America, and numerous states and areas within the United States. There are city maps or plans from places such as Washington, Paris, London and Venice, maps of Jerusalem and the Holy Land, some great early maps of the Great Lakes, Caribbean Islands, and even the stars. Some early maps show surprising accuracy; others seem to be drawn more from someone's imagination, or wild rumors. Finally, there is a collection of atlases offering many maps of the world as it was imagined at various points in time. Anyone who collects old maps, or is fascinated by how they can transport us back to an era when there was still so much yet to be learned, will thoroughly enjoy this catalogue. Here are a few of the old maps it has to offer.

The world as imagined in 1537 was a very different place. Africa and Asia were a bit misshapen at the time, though clearly recognizable. South America was too, though its southern half was but a narrow peninsula. Australia was unknown. North America is the most interesting. This map postdates Columbus and several of Vespucci's voyages, so the continent was known, but they had not penetrated the interior. The result is that North America appears as a long, narrow north to south island, by the name "Terra de Cuba." Cuba itself goes by its earlier name, "Isabella." Japan is located a bit to the west of this island, perhaps where the Mississippi River runs. It would have been much easier to import Toyotas and Sonys if this map were accurate. The oceans are filled with sea monsters, and the various continents have drawings pertaining to what one might find. For example, Asia has spices, Africa exotic people and animals, and America cannibals. Cannibals in America? I don't remember that being taught in my American history classes. A most intriguing feature is images of angels at the top and bottom of the Earth turning crank handles to spin it upon its access. This was still the era when the accepted explanation for movement of the heavens was that they were spinning around the Earth, not that the Earth was spinning. This map is found within the book Novus orbis regionum...by Grynaeus and Huttichius. The book includes information from Columbus' and Vespucci's voyages plus an early report on Magellan's circumnavigation. Item 2. Priced at $65,000.

Item 4 shows no North or South America, but mapmaker H. Schedel can be forgiven. This is the world Columbus knew, at least before he set out for India. The map is titled Secunda etas mundi (it originally appeared in the Nuremberg Chronicle, which was dated 1493). This is one of the earliest obtainable printed maps, published less than forty years after the invention of the press. The map includes illustrations of wind heads, common among older maps, the sons of Noah who repopulated the Earth, and various grotesque creatures who presumably lived in distant, unexplored lands. $25,000.