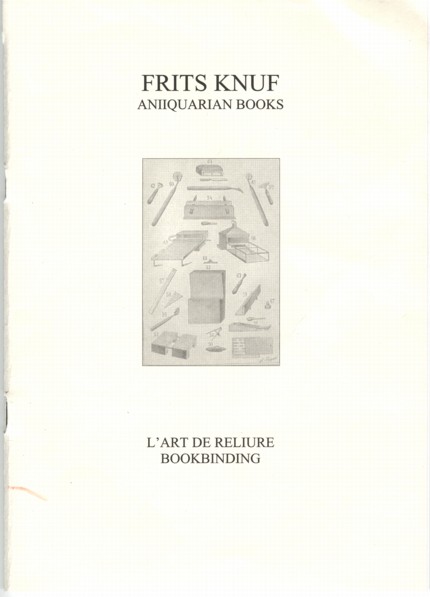 Frits Knuf Antiquarian Books has issued its 211th catalogue. It is L'Art de Reliure (the Art of Binding), or Bookbinding. This catalogue offers a wide selection of books within this field, over 400 in all. Frits Knuf is located in Vendome, France, but the material pertains to bookbinding from many lands, America included. Languages used include French, English, German and Dutch. While collections focused on bindings are a particular niche, within this area, the latest Knuf catalogue offers great variety. Here are a few, with a tilt towards those in English, as that is the language which this writer understands.

Item 110 is one of the standards on bookbinding, Edith Diehl's Bookbinding. Its Background and Technique. Edith Diehl was a teacher and practitioner of traditional bookbinding. This two-volume set contains 91 plates and 189 illustrations within the text. Volume one is a history of bookbinding, while volume two offers a practical guide. Published in 1946 when Diehl was 70, it provides a lifetime of experience. Priced at €216 (euros, or approximately $262 US dollars).

Item 52 provides a look at armorial bindings in the libraries of French royalty. The title is Armorial Bindings from the Libraries of the Kings and Emperors of France from Francis I to Napoleon III. It contains 33 descriptions of bindings, each with an illustrating color plate. This book was privately printed at the Chiswick Press in a limited edition of 100 copies in 1902. The entire collection may have been sold that year to Pierpont Morgan. €850 (US $1,032).

Robert Hoe III was the third in a line of Robert Hoes whose American company manufactured printing presses. Their advances helped make large-scale production of inexpensive newspapers possible. However, the third Robert Hoe was probably better known for his book collection than for manufacturing the presses which printed them. When it was sold in 1911, two years after his death, it was worth several times that of any other collection ever auctioned in America. Item 174, printed in 1895, is One hundred and seventy-six historic and artistic bookbindings...selected from the library of Robert Hoe. Hoe collected many fields (his collection included a Gutenberg), but he had a special interest in bindings. This catalogue of part of his collection was limited to 200 copies. €2,100 (US $2,550).

Hoe gave a talk on book bindings before the Grolier Club, of which he was a founder, on February 26, 1885, in New York. Two hundred copies of his lecture were printed by the De Vinne Press, under the title A Lecture on Bookbinding as a Fine Art. Displayed are 63 photographs of bindings Hoe discusses. Only 200 copies of this item were printed as well. Item 175. €570 (US $692).