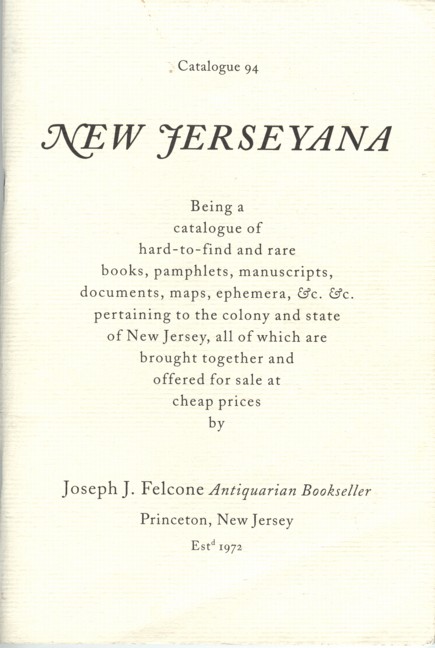 How many items of New Jerseyana are there? We have no idea, but can say at least 1,244. That's how many are listed in Joseph J. Felcone, Antiquarian Bookseller's latest catalogue. This is his 94th, and New Jerseyana is described as a "catalogue of hard-to-find and rare books, pamphlets, manuscripts, documents, maps, ephemera, &c. &c. pertaining to the colony and state of New Jersey, all of which are brought together and offered for sale at cheap prices..." I don't know about you, but those are my favorite type of prices. While most pertain specifically to New Jersey, some make it into the catalogue as being New Jersey imprints, even if their subjects are broader. New Jersey collectors are fortunate to have access to a collection such as this. Few states have anyone who covers them as thoroughly and knowledgably as Felcone covers New Jersey. Here are some samples from New Jerseyana .

We might as well start with earliest. Long before there were cities, casinos, and turnpikes, there were natives living off the land. And, before there were casinos and turnpikes, Charles Conrad Abbot wrote about them. In 1881, he published Primitive Industry: or Illustrations of the Handiwork, in Stone, Bone and Clay, of the Native Races of the Northern Atlantic Seaboard of America. It includes over 400 illustrations of prehistoric objects, mostly uncovered in New Jersey. Item 5. Priced at $175.

Elias Boudinot knew who those natives really were. Boudinot was a Revolutionary War patriot. He served as New Jersey's delegate to the Continental Congress in 1777-78 and 1781-84. In 1783, he served as president of that body and signed the Treaty of Paris. His role in that body has led some people to consider him America's first president, though that is a bit of a stretch. He served as a Congressman from 1789-95, then Director of the U.S. Mint. After he retired from government service, he became a trustee of what is today Princeton University, and founded the American Bible Society, an organization that promoted tolerance and opposed slavery. In 1816, he published this book, A Star in the West: or, A Humble Attempt to Discover the Long Lost Ten Tribes of Israel, Preparatory to their Return to their Beloved City, Jerusalem. The book provides much information on the customs of the Indians, though few people believe his basic premise today. One can only wonder what America's Indians would have experienced if they were suddenly transported to "their beloved city, Jerusalem." Cultural shock, I imagine. Item 128. $600."

Item 780 is The Clas Abrod. A Descripshun ov the tenting Tur mad bi the Techerz and students ov the Academi ov Siens and Art at Ringos, N.J., Jun, 1877, by Cornelius Larison. Larison must have been a terrible speller. No he wasn't! No one is that bad. Larison was a proponent of phonetic spelling, a reasonable idea that never caught on. There are ten of Larison's gems ("jemz," according to Larison) in this catalogue. For example, you could pick up a copy of Iz the Sol a Substans, or Reminissensez ov Scul Lif, or Spelin-Reform Jemz. Actually, I used to spell this way when I was in skul, but my techerz were not so understanding. The Clas Abrod retells a trip Larison and his students took around New Jersey in 1877, though the book wasn't published until 1788. Larison's publisher was the Fonic Publishin Haus. $150.