Literature, Photography, & Miscellany from James Cummins Bookseller and Between the Covers Rare Books 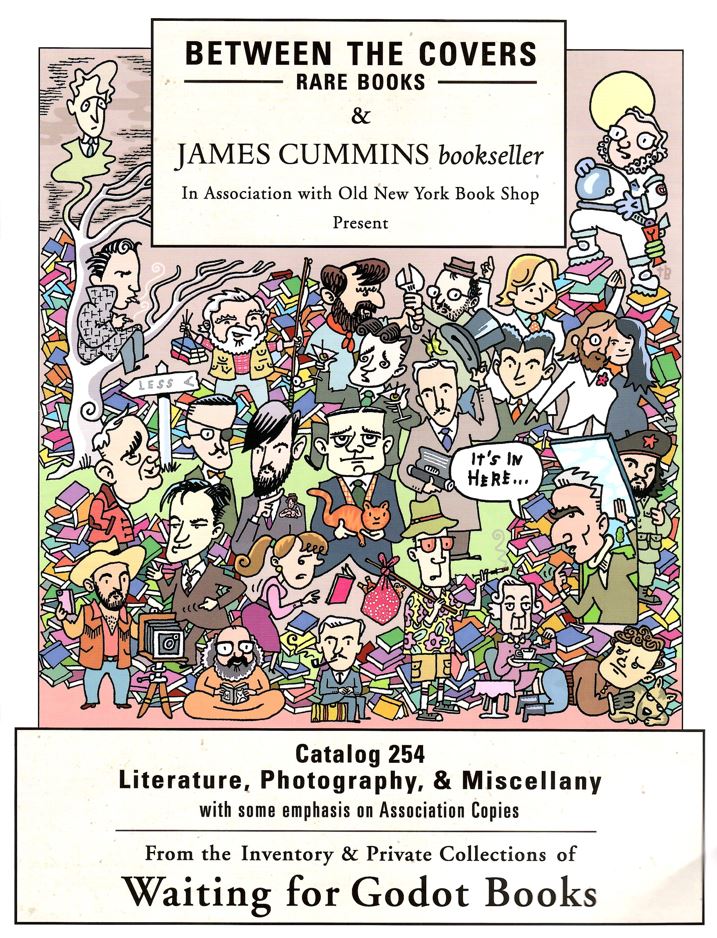 Literature, Photography, & Miscellany from James Cummins Bookseller and Between the Covers Rare Books

James Cummins Bookseller and Between the Covers Rare Books have issued a catalogue of Literature, Photography, & Miscellany with some emphasis on Association Copies. It further explains, from the Inventory & Private Collection of Waiting for Godot Books. Located in Hadley, Massachusetts, and before that, Cambridge, Massachusetts, Waiting for Godot Books had been in business for 40 years. It was owned by Gary Oleson and Frannie Ness, both of whom passed recently. Along with being booksellers, Gary Oleson had a personal book collection, which he kept privately, so these books were never offered to the public. They specialized in just about everything, so just about anything might show up in their inventory. Here are a few of those books from the fields of literature, photography, and everything else.

If you have come to associate photographer Ansel Adams with national parks and scenic beauty this book may be jarring. There is some beauty in the barren settings and certainly in the people, but this is not a beautiful event. Rather, it is a shameful one. The title is Born Free and Equal: Photographs of the Loyal Japanese-Americans at Manzanar Relocation Center Inyo County, California. It was published in 1944, as the loyal Japanese Americans were starting to be freed from their wartime imprisonment for doing no wrong. The use of “loyal” to describe the residents of Manzanar certainly sums up how Adams felt about the internment. Adams was not out to discuss the social issues relating to classifications of citizens. He was there to show their humanity, that these people were human and loyal Americans, with the same feelings and emotions as those on the other side of the fence. He uses his photographs and text to show that they were fundamentally the same as the rest of us. This copy is inscribed by Adams to M. H. Pollock in February 1946. Item 69. Priced at $9,500.

Do you suffer, as do I, from confusing Upton Sinclair and Sinclair Lewis? They were very different writers, but both were writers and shared a name. Here are two people who never suffered this confusion. Item 109 is a copy of Dragon's Teeth by Upton Sinclair, inscribed to Sinclair Lewis. They were friends. Upton avoids any confusion by using Lewis' nickname, “Hal,” in the inscription. He writes, “To Hal, How many strange things have happened in the world since fate brought us together. Upton, Xmas, 1941.” That fate came in 1906, when Lewis left Yale and became a janitor in Upton's Helicon Hall colony. Upton Sinclair founded the colony with funds from his most famous novel, The Jungle, an hour from New York in New Jersey. It was a communal setting, a place where artists and professionals could move to live in a farming community. It was all very groovy, but the place burned down the following year and was never rebuilt. Dragon's Teeth is a story about a man rescuing his Jewish in-laws' family from Germany in the early 1930s. $15,000.

Perhaps Helicon Hall would have succeeded if the communal meals had been better. This cookbook might have suited the crowd but it came along 64 years too late. It is The Hippie Cookbook or Don't Eat Your Food Stamps, by Gordon and Phyllis Grabe, published in 1970. The food for the most part is unremarkable but the descriptions make it entertaining. The catalogue notes, “Apparently if you are female, cooking bare-breasted is required.” Indeed, there is a section on “cooking in the nude,” which undoubtedly would have made the members appreciate the meals more. They offer selections such as “peace pancakes” and “paddy wagon rice patties,” which appear to be standard fare rebadged to appeal to their audience. Item 25. $275.

Since this collection comes from Waiting for Godot Books, there must be something relating to Waiting for Godot. Here it is! This is not the typical Godot item. It is a broadside poster for ...the 1st All Female Production of Samuel Becket's [sic] Waiting for Godot Tuesday, 20th July to Sunday 25th July, 1971. I can't vouch for the accuracy of the “1st” claim, but it sounds likely. I'm not sure how Vladimir and Estragon would have felt about being portrayed by women. Beckett didn't like it. The booksellers tell us, “Beckett, and then his estate, strongly resisted the casting of all female actors, going as far as bringing legal action against several productions to mixed results.” I don't know why he objected. Would that interfere with the plot, make it harder to understand? The show took place at The Little Theatre Club in London. Item 6. $4,500.

Here are a couple of broadsides containing the wisdom of Hunter S. Thompson. One was written in 1960, when Thompson was a young man, the other in 1994, when he was not. Both are quintessential Hunter Thompson. The first is an Open Letter to San Francisco. It pictures Thompson kneeling alongside a flat, deserted, desert road, probably in Nevada along a route one might take escaping San Francisco. He describes San Francisco as “City of hills and fog and water, bankers and boobs – Republicans all. City of no jobs - 'sorry we have no openings here...'” San Francisco has changed. It is certainly no longer all Republicans, and there are plenty of jobs. They just don't pay enough to be able to live in San Francisco. You still need lots of money to live there, even more now, so that hasn't changed. Published in 1996. Item 114. $1,500.

The other Thompson broadside is headed He Was A Crook. This was Thompson's tribute to Richard Nixon after he died. Thompson had no interest in being polite or respectful to the dead. He was, as always, speaking his mind. “Subject: The Death of Richard Nixon: Notes on the passing of an American monster... He was a liar and a quitter, and he should have been buried at sea.” Thompson's photograph here is as an older person, standing with a glass in his hand. This broadside is inscribed by Thompson to Ron Whitehead, the publisher. Published in 1994. Item 113. $3,500.

Orders and inquiries should be made to 856-456-8008 or mail@betweenthecovers.com.