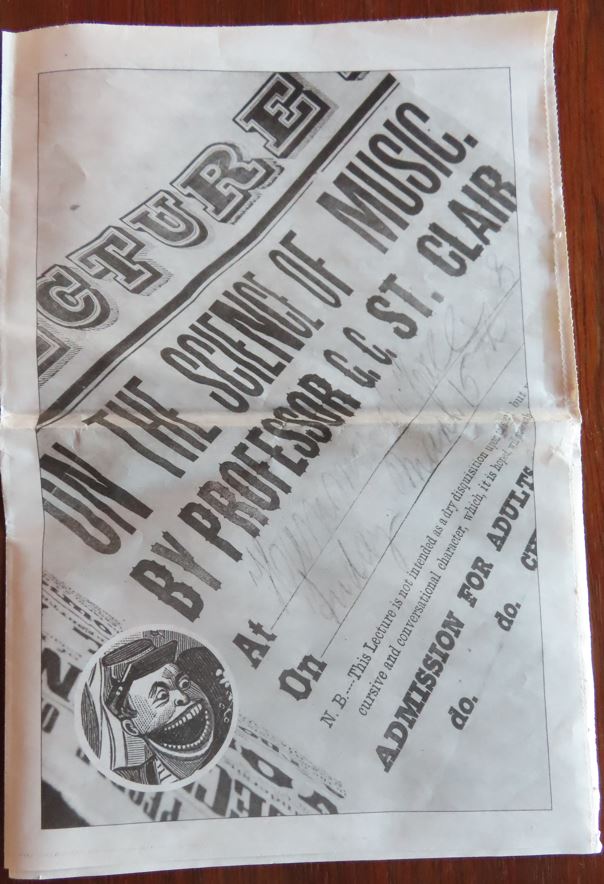 Garrett Scott, Bookseller has issued Catalog 41: On the Lintels of the Door-Post. I'm not sure what that means, but that could also be said about the writings of many of the authors herein. His material can charitably be described as odd. Scott has not been a regular issuer of printed catalogues of late. He notes that this is his first one in nearly nine years. This is a large newsprint publication, containing only 10 well-described items. He notes that “Ten items should start to give you some idea what might turn up from this bookselling concern.” If you read any of Scott's catalogues from before nine years ago, you already know. People are strange. Here is a brief synopsis of what's inside.

1. 77 monthly issues of the American Phrenology Journal from 1857-1863. Phrenology was a pseudoscience popular in the 19th century that claimed you could tell what's in a person's soul and personality from the shape of their face. It was all pseudo and no science. $850.

2. The personal scrapbook of Charles G. St. Clair, “a music teacher, organist, performer – and likely fugitive criminal,” compiled circa 1858-1887. St. Clair's scrapbook shows a man, his wife and son. constantly on the move, all over America and into Canada and Mexico, teaching music and performing, and probably theft, which could account for all the moving. His wife and son spent time in jail and he may have too. This scrapbook of his wonderful attributes and accomplishments may have been created to enhance his reputation, though he apparently did that himself, faking such credentials as degrees he did not have. $3,800.

3. A hand-lettered black ink 35” x 53.75” muslin banner for The Church of God, circa 1900. It contains lots of brief religious oriented phrases along with some activities such as “Oyster Supper,” “Donkey Parties,” and “Tackey Parties.” Scott informs us that donkey parties featured the game pin the tail on the donkey. Tackey parties is less clear, but they sound tackey. $1,850.

4. An 8,000 word temperance address delivered in May 1848 in Polkville. It was apparently Polkville, New York, but there appear to be a few such hamlets in the state, none very large. Comparing a “learned pig” to his master, the writer points out that the pig “actually knows more than his master in that he will not get induced to get drunk and wallow in the filth of his own spewing, at least more than once.” $2,000.

5. A broadside with the caption title, Animals of Opposite Natures Living in One Cage. It is circa 1830-1840. John Austin had assembled a group of animals who in nature don't always get along in one happy cage. The wolf shall dwell with the lamb. $650.

6. An 1845 proclamation from the Apostles of the Church of Jesus Christ of Latter-day Saints to all the Kings of the world, the President of the U.S., and more, concerning a revelation received by Joseph Smith in 1841. $650.

7. Missionary All-Stars, two complete sets of 64 cards each from the Assemblies of God, 1992-1993. They contain biographies of numerous missionaries. $50.

8. Ten issues, Vol. 1 No. 1-10, of the Voice if Israel, from 1869-1870. This was the prophetic work of Joseph T. Curry, who a year later would lead a group of followers from Massachusetts to Georgia to head a colony of followers, he taking the mantle of Elijah. Free love was evidently part of their beliefs and he was arrested, though a follower claimed what really ticked off Georgia authorities was his teaching Black people. $1,200.

9. A composite photograph from Charles Tucker in 1868 of “People we use [sic] to know in Naugutuck, Conn.” The Tuckers must have known everyone in that town as there are a lot of faces here. Tucker then moved west, to Indiana, Colorado, and died in San Diego in 1925. $300.

10. The Origin of Life: A Popular Treatise on the Philosphy and Physiology of Reproduction in Plants and Animals, including Details of the Human Generation and a Full Description of the Male and Female Organs. This circa 1847-1849 book must have been popular indeed as it is stated the 16th edition with many more to come. One imagines most readers of Dr. Frederick Hollick's sexual physiology skipped quickly past the parts about plants and animals. $450.