Politics and War from the William Reese Company 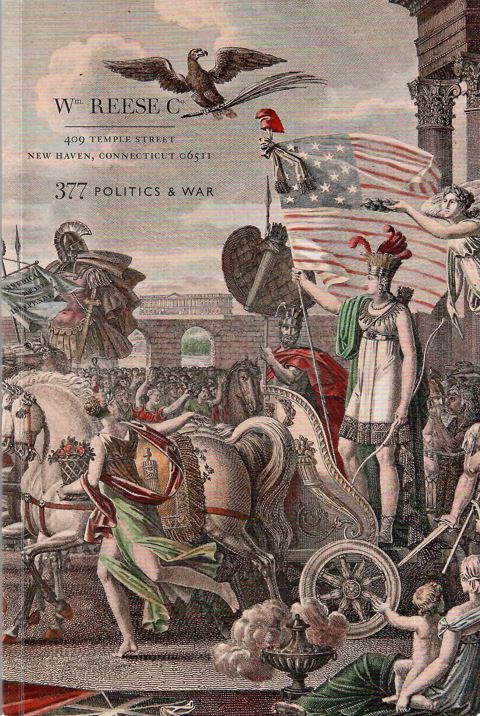 Politics and War from the William Reese Company

The William Reese Company has issued their 377th catalogue, Politics & War. Those are topics that still dominate the news today, but these are not about current disputes and conflicts, no claims about elections or war in Ukraine. These works extend from the days before the American Revolution to the Spanish American War, over a century ago. The more things change the more they remain the same. Here is a look at yesterday's battles.

We begin with a very rare incendiary broadside from the pen of flamethrower Samuel Adams, published on November 20, 1772. It was sent to the towns of Massachusetts by the Boston Committee of Correspondence, asking them to form similar committees. Adams writes, “We the freeholders and other inhabitants of Boston...apprehending there is abundant reason to be alarmed that the plan of despotism, which the enemies of our invaluable rights have converted, is rapidly hastening to a completion, can no longer conceal our impatience under a constant, unremitted, uniform aim to enslave us...” What particularly set off Adams and others to form the Boston Committee was a change whereby England transferred the method of payment of judges from Massachusetts to the Crown, making them dependent for their salaries on England, which could influence their judgment. This is the copy that was sent to the town of Kingston, south of Boston. Kingston would become a strong supporter of the colonists' cause and the revolution that began a few years later. Item 4. Priced at $22,500.

Fast forward, the colonists have revolted, fought, and won. It's all over but the official documentation. After the surrender at Yorktown, Parliament had had enough of the war and so published this act headed as to Georgii III. Regis. That is the hated King George III (hated in America). It is An Act to Enable His Majesty to Conclude a Peace of Truce with Certain Colonies in North America therein Mentioned, dated 1782. In other words, Mr. King, do your best to save face but get us out of there. It acknowledges the desire to return to peace, trade and commerce, and authorizes the King to reach an agreement with the Colonies to achieve this. Item 12. $3,750.

We move forward 20 years and find King George III once again on the verge of war, but not against America this time (that would come a decade later with the War of 1812). Now the enemy was France and its ruler, Napoleon. There were wars between various nations in Europe from the time of the French Revolution until Napoleon's defeat at Waterloo two decades later, except for a brief one-year period in 1802-1803, achieved through the Treaty of Amiens. England and France were always at each other's throats and Napoleon was ambitious with plans to eventually capture most of Europe. The result was that Amiens soon broke down. On May 12, 1803, King George wrote this letter (in his personal hand and signed by him) to his Secretary of State, Lord Hawkesbury. George had not heard from his ambassador to France and a French general who was supposed to have arrived in London for a last-ditch peace effort failed to show. The handwriting was on the wall and George knew it. The peace was about to come to an end. King George writes, “War seems now so certain that Lord Hawkesbury cannot too soon form the negotiations between this country and France in a Manifesto and state the conduct of the latter fully since the conclusion of the Peace as the cause of the steps we have been obligated to take...” George wanted Hawkesbury to describe the case against France that forced England to go to war. Six days after this letter was written, England declared war on France. Item 32. $20,000.

In December of 1860, South Carolina officially proclaimed its secession from the Union. Its government quickly called on other southern states to join them, and six answered the call. However, the important southern state of Virginia did not along with three other southern and border states. On April 12, 1861, the Confederate forces attacked Fort Sumter just off the coast of Charleston, South Carolina. The Union did not have the forces to defend the fort nor the needed supply lines and were forced to surrender it. That led to this exceedingly rare broadside, a document headed By the President of the United States. A Proclamation, on April 15, 1861. Only one other copy, at the National Archives, is known. In it, President Lincoln cites his power, in the case of obstruction of the laws by forces too powerful to quell by ordinary judicial proceedings, to call on the state militias to provide troops necessary to defend the country. He called for the states to provide 75,000 men. This was not something the remaining southern states were willing to do with four more states, including Virginia, joining the Confederacy. The full war was on, with four years of terrible bloodshed to follow until it all returned to where it started from after Appomattox. Item 44. $125,000.

The Cherokees found themselves between a rock and a hard place when the Civil War broke out. They were on the border, sandwiched between Union and Confederate territory. Stand Watie had signed the agreement to move from their ancestral homeland in the east to Oklahoma in 1835, against the wishes of most Cherokees. He stood to be killed for his action, but managed to stay hidden until working his way back into their good graces. He became an advocate for the Confederacy and then the only Indian to serve as a general in the Confederate army. It is understandable that Cherokee sentiments would be less than supportive of the Union considering it was that government which sent them on their deathly “Trail of Tears” earlier. After the war was won by the Union, the tribe found itself in a difficult spot. They were excluded from post-war negotiations. In an attempt to get an invite, they published this pamphlet in 1866, Communication of the Delegation of the Cherokee Nation to the President of the United States, Submitting the Memorial of Their National Council, with the Correspondence between John Ross, Principal Chief, and Certain Officers of the Rebellious States. At the outbreak of the war, Stand Watie had pushed Chief Ross into signing a treaty to support the Confederates. Within a year, Ross cut ties with the Confederacy and went to Washington to explain his case but was rebuffed. This was their account of what had happened during the war. Item 20. $3,000.