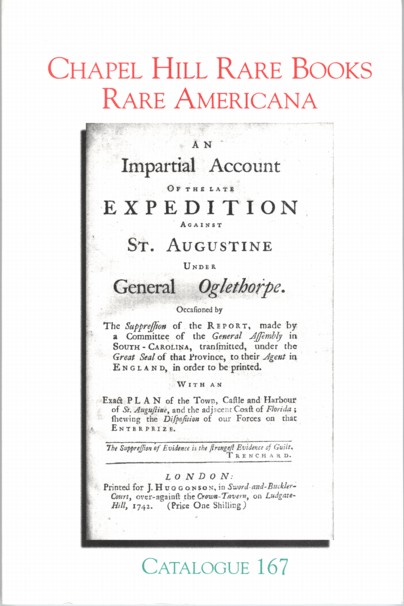 Americana collectors take heed. Chapel Hill Rare Books has issued one of the best catalogues in the field we have seen. Rare Americana includes 335 items of primarily 17th to 19th century material pertaining to America. These are all significant and collectible works. While their previous, Civil War catalogue had a distinctive southern orientation, this one is truly national in scope. I am not sure how so many New England colonial works and the like ended up in Chapel Hill, but suffice to say they did. If you are a collector of Americana, you simply need this catalogue.

Just a few of the subjects covered in this catalogue are early Colonial America, King Philip's War, French and Indian War, Revolutionary War, War of 1812, Civil War. Did we need so many wars? There are travels, particularly inland ones when the frontier included areas like Ohio, Kentucky, Tennessee, and Alabama. There are numerous Indian skirmishes and those dreadful "Indian captivities," where Indians are painted as the worst savages for trying to defend themselves from marauding settlers. There are items pertaining to pre-Civil War presidents, as well as political figures both forgotten and revered. We have views of America from the eyes of foreigners, primarily British. Some see us with respect; others disdain. We hear war stories from those who fought on both sides of America's internecine battle. Other books tell of events leading up to that struggle, and of course, the "peculiar" institution of slavery, from both those who abhorred it and those who defended it. Many works pertain to particular states, or are rare imprints from frontier communities. This is a remarkable catalogue, and we will describe a handful of the items we found, but this is a catalogue that must be perused in its entirety to be fully appreciated.

Increase Mather and his son Cotton are probably most often remembered as dour, fanatical churchmen of the Salem witch trials era. That is not necessarily totally inaccurate, but there was a bit more to their lives. Item 68 is a copy of Increase's Brief History of the War with the Indians in New-England. From June 24. 1675. (When the First Englishman Was Murdered by the Indians) to August 12. 1676. When Philip, Alias Metacomet, the Principal Author and Beginner of the War was Slain. For the first fifty years after the pilgrims arrived, there was relative peace between the settlers and natives. Remember the Thanksgiving story? This broke down in distrust in the 1670s as settlers purchased more and more land from the Indians, who had become increasingly dependent on English goods. Wampanoag Chief Metacomet, aka King Philip, discovered one of his men was passing secrets to the settlers. He had three of his warriors kill the turncoat. In turn, the colonists killed those warriors. The battle was on. For a year, the Wampanoags and the Nipmunks waged war on the settlers. Outlying settlements were destroyed and many colonists, including women and children, were killed. However, in time the colonists would overwhelm Philip and his allies. King Philip was beheaded, his head placed on exhibition in Plymouth for many years. More importantly, it would open New England to the settlers. The New England Indians would never again be able to stop the spread of colonists into the territory they once controlled. This first English edition from 1676 is priced at $18,500.