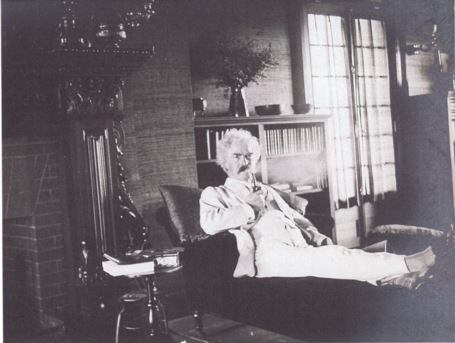 Clemens was one of those who questioned whether Shakespeare was the author of Shakespeare's works. He was not the first, and certainly not the last. In his day, the primary candidate for the "real" Shakespeare was Francis Bacon. Bacon had the noble connections to understand the intrigues of which Shakespeare wrote, and he was himself a prodigious author. So prodigious that it's hard to imagine where he could have found the time to write his own works plus those of Shakespeare, not to mention his many public duties for the government. His writing style also had many differences from those of Shakespeare. Nevertheless, many people have found it hard to believe that someone of the ordinary, not well-educated background of Shakespeare could have written his works. Today, there must be a dozen different pretenders to the claim of being the author of Shakespeare's works (even Shakespeare himself!). A century ago, there were few, and Bacon was considered the prime suspect. Clemens was a Baconian. Offered is a copy of the Mark Twain book Is Shakespeare Dead? "Shakespeare gets a lot of applause for Hamlet," Clemens has written on the front pastedown, "but if you had written it you couldn't have got it accepted." If Clemens wrote like that very often, he couldn't have gotten his work accepted either. Maybe Clemens wasn't really Mark Twain after all? No, let's give Clemens his due. And Shakespeare. $12,000.

19th Century offers a collection of 50 photographs of Clemens taken by his secretary, biographer, and some others. A few are formal, most are personal, such as Clemens aboard a ship, with a kitten, with the aforementioned Henry Rogers, and with Helen Keller (Rogers helped pay for her education). This is a remarkable collection of private images of the author during the latter years of his life. $18,000.

Next is a copy of the 1919 edition of Albert Einstein's General Theory of Relativity, or, this being in German, Die Grundlage der allgemeinen Relativitatsttheorie. This being one of the most important discoveries of science and so well known, there is no need for us to explain the theory further. You already understand it - E=MC2. This copy is signed by Einstein on the front cover and dated "51." $32,000.

Finally, we have a most amazing student's record book. The student was Theodor Meyer, a scientist who has faded into obscurity. However, the professors he had teaching him in 1924 certainly have not. That winter, Meyer took courses with three professors who won Nobel Prizes for physics, and another who should have. The medal winners were Einstein, Max Planck, and Max von Laue. Ignored was Lise Meitner, who collaborated in the discovery of fission but who, for political reasons, was neglected (she would later receive the Fermi Award and have a chemical element named for her). Each of these greats signed Meyer's course book attesting to his attendance at school. $15,000.