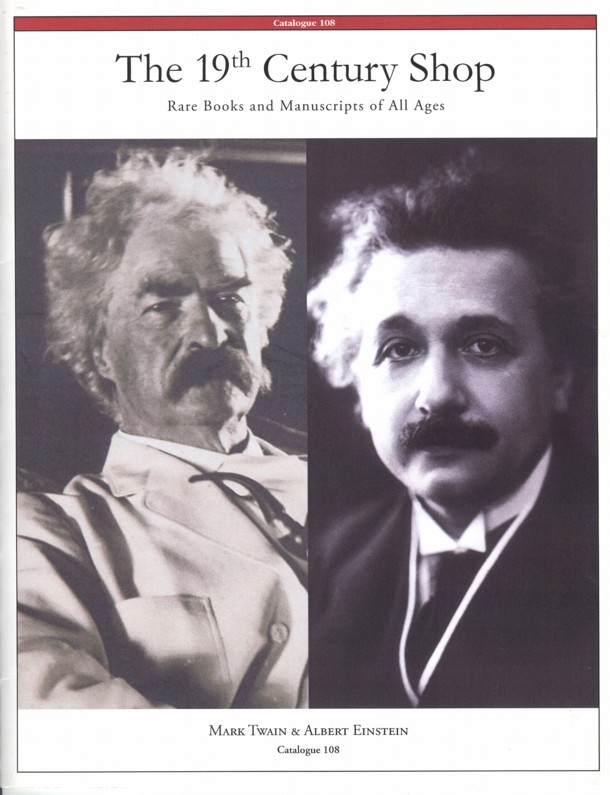 There are just two, very specific subjects of the 19th Century Shop's 108th catalogue. One is Mark Twain. The other Albert Einstein. What did these two gentlemen have in common? On the surface, not all that much. One was one of the world's greatest writers, perhaps the finest America ever produced. The other was a brilliant, scientific mind. If there was ever anyone smarter, I cannot imagine who he or she was. So they do share the attribute of brilliance, though I doubt Twain could have understood the theory of relativity, or Einstein have written Huckleberry Finn. However, both had shocks of long, gray hair in their later years, and each is the subject of the latest 19th Century Shop catalogue. Here are some of the items from these two great men you will find in its pages.

Twain's greatest friend and benefactor during the last two decades of his life was Henry H. Rogers. Rogers was one of the great industrialists of his or any era. Born of working class roots, Rogers sought his fortune in the Pennsylvania oil fields and found it. His business would be absorbed by John D. Rockefeller's Standard Oil, of which he became a principal and leader. From there, he would extend his influence into copper and steel, being a director of U.S. Steel, and into railroads, the giant industry of its day. He was known as a ruthless competitor and was labeled as one of the "robber barons." However, Rogers had a softer side, and gave generously to his hometown of Fairhaven, Massachusetts, and through Booker T. Washington, to schools to help educate Blacks in the South. He also befriended Samuel Clemens (aka Mark Twain) in the 1890s when the latter found himself in financial straits due to bad investments. What Rogers did for Clemens was remarkable. He took over management of his finances, nursing him back to financial health. All the while, Rogers managed to hold onto Clemens' literary copyrights, rather than allowing creditors to gain control of his life's work. By effecting Clemens' recovery through the author's own assets, rather than giving him money as Rogers easily could, Rogers enabled the writer to recover financially while retaining his dignity. Rogers truly was a friend, and Clemens greatly appreciated it. This item is a letter, signed "S.L.C.," from Clemens to Rogers, written aboard Rogers' yacht off of Cape Cod. Evidently Rogers was unable to take the time off himself. "By George, you ought to have been along!" Clemens exclaims. And, "There is no way to thank you for this lovely trip, though Mrs. Clemens is trying all the time to express it." The letter is dated June 26, 1902. Priced at $7,000.

This offered copy of Personal Recollections of Joan of Arc is inscribed by both Clemens and his daughter, Jean. Jean suffered from violent epileptic seizures, and sadly died the following year at the age of 29. During the summer of 1908, Jean stayed at the seaside Gloucester, Massachusetts, home of Frances Knowles. Clemens was most grateful, and inscribed this book, "To Mrs. Frances Serrill Knowles with grateful appreciation of her kindnesses to my daughter Jean. S.L. Clemens August 1908." Jean Clemens also inscribed a note to Mrs. Knowles. This copy carries the provenance of Walter Chrysler, better known for his automobiles than his book collection. $7,500.