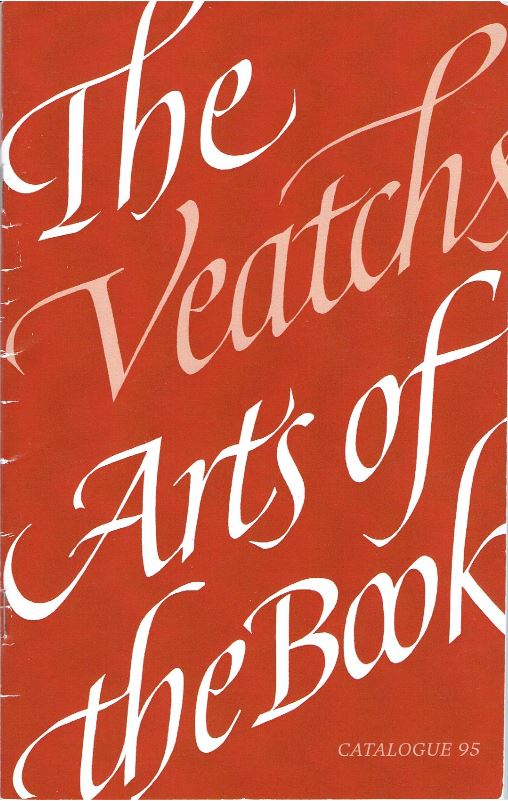 The Veatchs Arts of the Book has published their Catalogue 95. The long title is New Acquisitions, Artists' Books, a Rare Bickham, Bindings, Typographic Treasures, Two Versions of the 1893 Book of Common Prayer, Thirty Years of Henry Morris Correspondence and Ephemera. The book arts is where everything is beautiful, books and printed items are works of art, as much as or more than text. They are books that can be appreciated regardless of whether you can read. Here are a few samples from the Veatchs' latest collection

This is one of those two 1893 books of common prayer, the more luxurious copy. The long title is The Book of Common Prayer and Administration of the Sacraments and other Rites and Ceremonies of the Church According to the Use of the Protestant Episcopal Church in the United States of America: together with the Psalter or Psalms of David. It was printed by Theodore De Vinne's De Vinne Press. It is in the original vellum, 566 pages printed in black and red within red rules. Out of 500 copies, this is one of 75 that were printed for the Episcopal Revision Committee. The other copies had been printed with medieval floral borders, somewhat out of place with the modern type. This issue replaced the original borders with red rules. This copy has been signed by 13 members of the Episcopal Revision Committee, one of whom was the wealthy industrialist J. P. Morgan. Item 9. Priced at $5,000.

Next we have a humorous book, with the cover title of Quads Within Quads, or inside, Quads for Authors, Editors, and Devils. It is an oddball piece of humor from printer Andrew White Tuer, published in 1884. For the uninitiated, quads are metal spacers used to separate characters when placed between the metal type in the printing presses that were used in 1884. The book contains printer's jokes that were published in the Paper and Printing Trades Journal. This publication was published by Fields & Tuer, closing down in 1896. If you don't get the jokes don't feel bad. Not many people still understand the lingo of 19th century printing presses. There is an oddity which explains the title of Quads Within Quads. Within the main book in a hollowed out compartment is a “midget folio,” a miniature version of the same book printed on handmade banknote paper. Item 40. $1,200.

This book comes from 1985, but parts of it are almost five centuries older. The title is Aldus Manutius and the Development of Greek Script and Type in the Fifteenth Century, by Nicolas Barker. Aldus and his Aldine Press of Venice were groundbreakers in their time. He sought to print classic works and make them available to the masses for a reasonable price. Of course, these were small masses as few people could read at that time. They were the “masses” of educated, upscale people. Aldus was noted for his type designs, including italic type which he developed. This is a leaf book, which explains the five centuries-old comment about this work. It contains leaves from the Aldine Press Aristotle (1497), Crastonus' Dictionarium Graecum (1497), Euripides (1503), and the Septuagint (1518). Offered is one of 20 copies (of a total of 200) with particularly notable leaves. Publisher Chiswick Book Shop meant these copies to go to special customers, but this was not announced for fear of hurting the feelings of those who were not quite so special. Item 2. $3,500.

Here is an unusual one: Frasconi's Composite Side Show, published in 1978. Antonio Frasconi was a Uruguayan who came to America and got a low-level job at a museum where his skills as a woodcutter were noticed. It led to a long career as an artist. This item displays 22 of his woodcuts in a French-fold design. The images are odd to say the least. The Veatchs explain, “Akin to a circus side show of freaks, there are anthropomorphic animals with human heads or humans with animal heads. There's a male peacock with the upper torso of a woman playing a violin. A row of figures in black business suits, white shirts, and ties sport the heads of a buzzard, horse, donkey, lion, rabbit, goat.” The figures are all in black, but are viewed through various shades of colored tissue paper. Item 13. $3,250.

The title of this next book is Fleuronologia. This is not some sort of rare disease. This is a book about fleurons, those flower-like designs you often see in books. They are usually used as borders. The book comes from Leonard Baskin, artist, illustrator, sculptor, and publisher. It was printed by his Gahenna Press in 1996. The book contains 32 pages of Baskin's color etchings of fleurons. They are not used as borders but are displayed as the feature of each page. They are not limited to flowers or designs either. Baskin says, “Here are dancing sprites and spritely insects, heavy birds & thick bovines & gossamer thin arabesques, leering terminal figures & careening unknown avians, fleuron bedecked skulls & and a specter or two.” Each plate is numbered and signed by Baskin, it includes two small color etchings, and the copy is #23 of 26 copies signed by Baskin and Sidney Berger, who contributed an essay on the history of fleurons. Item 3. $16,000.