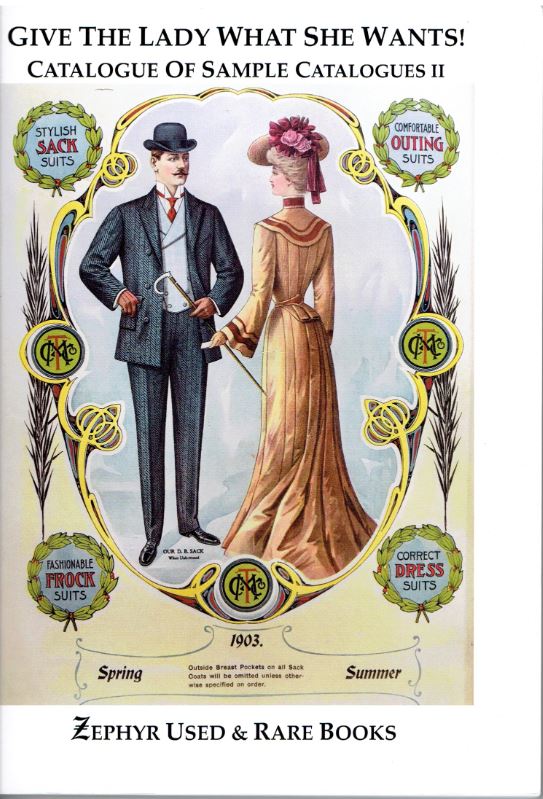 Zephyr Used and Rare Books has created a catalogue entitled Give the Lady What She Wants! Catalogue of Sample Catalogues. Some include actual product samples, while others allowed people to sample their wares through pictures. Some were intended to be used by salesmen, while others were targeted to the consumers themselves. Most are from the first half of the twentieth century, but some come from both sides of it. Each provides a look at who we were, what we liked and valued, a couple of generations ago. Here are a few examples of what you will find.

There was a time when the doorbell rang, you almost assumed it would be the Fuller Brush man. I don't know who bought door-to-door brushes, certainly not my mother, but some people must have because they kept coming back. They had their techniques for getting in, and some of it is explained in this salesman's sample kit. Item 94 is a kit for field managers to recruit additional salespeople. Think multi-level marketing. Along with printed documents it includes a naugahyde sample case, a projector and film strip, a turntable and a 33 LP record. Once you learned the system, you could be obnoxious with the best of them. For example, if a homeowner rebuffed an offer of a “free promotional gift,” the salespeople were told to tell them, “I'll just step in and leave your gift and look at your...(pick up case and step forward).” Not in my house you won't. Fuller Brush has gone through numerous ownership changes and a bankruptcy since this kit was created in 1962, sales are not as robust as then, and most sales are now done through different channels, but there are still some Fuller Brush men (and presumably now women) out there pounding the pavement. Priced at $450.

Next we have two albums of photographs for the National Electric Sign Works of Battle Creek, Michigan. They made lighted and neon signs between 1922 and around 1935. That dating coincides with the look of the signs in these photos and the cars seen in front of a merchant employing one of their signs. Among the neon signs was one for a Marmon Motor Car dealership. They stopped making Marmons in 1933. They are mostly for local merchants, such as the Gratiot Grill, Amazon Sweets Restaurant, Owosso Bowling Club and Cities Koolmotor service station. The firm was operated by a bunch of members of the Steinbacher family, Henry, Harry, Robert and Leroy. Item 74. $6,500.

This next item is a dealer factory showroom album from the early days of the automobile. It is from the Willys-Overland Company in 1912. Overland began business in 1905, but ran out of money when John North Willys, a car dealer from Elmira, New York, stepped in and bought the company in 1908. Willys proved to be a dynamic and enormously successful businessman. In 1912, the year this album was created, he changed the company name to Willys-Overland, and for that year, and the next six, the company was the second largest automobile manufacturer in America, behind only Ford. The Overland name was dropped in the 1920s, but Willys persisted until purchased by Kaiser in 1953, later to be combined into American Motors which eventually was taken over by Chrysler. The Willys name is long gone, but one of their models persists to this day – the Jeep. The album starts with a photo of John North Willys, and then goes on to pictures of their massive factory in Toledo and images of the various models the firm was producing. There are also cutaway pictures of the vehicles and engines, and the workers and facilities in the plant. Item 20. $1,650.

Now, where can you keep your new Willys-Overland to protect it from the elements? Here's an answer. You can quickly build a secure garage from Armostone panels, manufactured by the Concrete Housing Corporation of New York. Item 2 is a salesman's sample catalogue with 22 pictures illustrating the Armostone garage system. The panels were made from precast concrete, each 3 feet wide, one inch thick, and one story high. They featured tongue and groove construction so they could be easily fit together, then sealed with cement mortar. They could even be coated with stucco to look more attractive. One photo shows its durability. The garage was subjected to fire. The wooden doors burned, but the rest of the structure survived. Just replace the doors and it's as good as new. While garages were the main uses, you could also use these panels to build a bungalow, temporary housing, a small service station, etc. Zephyr tells us the Concrete Housing Corporation was in business until the 1960s. $1,250.

There was a time when you bought books not by going to the internet nor even to a bookstore if you didn't live in a city. They were often sold by subscription, door-to-door, like Fuller brushes. Item 90 is a salesman's copy of a publisher's dummy for Illustrious Americans Their Lives and Great Achievements. You can read about people like George Washington, Abe Lincoln, Harriet Beecher Stowe, Louisa May Alcott, even Robert E. Lee (a great Confederate but not much of an American). The biographies and portraits were created by various contributors. The introduction was prepared by Edward Everett Hale. The book was published in 1896. If you still have a copy purchased by your great-great grandparents, you can open it up and learn about many Americans who were famous before 1896, but don't expect to get rich selling your copy. Too many were printed and it doesn't bring much in the market even if it is now 125 years old. $50.

There are several clothing sample books here, but this is an unusual accessory, an item a part of every garment. J & J Cash Ltd. was selling those brand labels you find sewn into every piece of clothing. They were made from woven silk, and manufacturers generally used decorative logos and often illustrations on them. Some of the brands whose labels are depicted include Spirella Corsets, I. & R. Morley's Theta Flying Wheel shirts, and Snipe Weatherproofs. There are labels that can be removed from the elastic so potential buyers could examine their quality. Circa 1905. Item 43. $850.