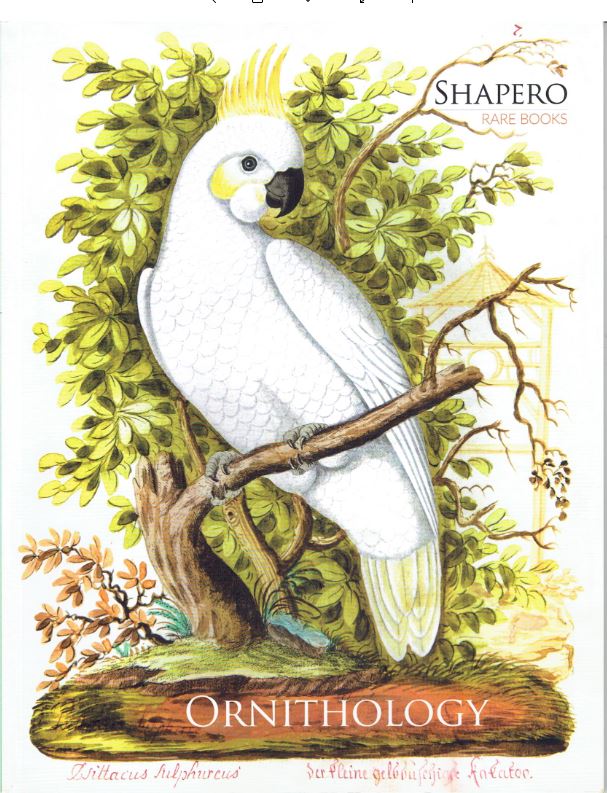 Shapero Rare Books has published a new catalogue entitled Ornithology. There are few subjects that attract as much collecting interest as the study of birds. The reason, and why many of the highest prices ever paid for a book were for Audubon's Birds of America, is that few subjects are as beautiful as birds. A skilled artist and a book about birds is bound to be a work of art. That is true of the 28 selections found in this catalogue.

While some of these titles are specifically books about birds, others are accounts of exploration voyages. However, those books are ones that studied the natural history of the places they visited, with birds being a focus of study and illustration. They are simply more than just books about birds, not less. Here are a few of these selections.

Bird books from the 18th century don't get much attention. Audubon in America, Gould in England, in the 19th century so dominate public attention that earlier bird books can be almost forgotten. There were some good ones, and this is up near the top of them: A Natural History of Uncommon Birds, and of Some Other Rare and Undescribed Animals, Quadrupeds, Reptiles, Fishes, Insects... It was published from 1743-1751. It is bound with Gleanings of Natural History, Exhibiting Figures of Quadrupeds, Birds, Insects, Plants (1758-1764). Both are by George Edwards. Edwards was a skilled natural history artist who was appointed librarian at the College of Physicians through the influence of Sir Hans Sloane, whose massive natural history collection was part of the foundation of the British Museum and British Library. Sloane hired Edwards to draw the curiosities in his collection, providing the latter with the income needed to take on the project of painting the images for these books. Along with European birds, he included many found in India and America. While this might seem like an odd combination today, he had to draw his images from collections that others had amassed, not actually going to the places they inhabited as such travel was prohibitive at the time. Offered is the complete seven-volume set which contains 362 hand-colored engravings. Item 7. Priced at £30,000 (British pounds or approximately $39,980 U.S. dollars).

This is perhaps the second most important bird book after Audubon's Birds of America. This is John Gould's The Birds of Europe, published while Audubon was publishing his American magnum opus, 1832-1837. It was Gould's first multi-volume set, five volumes in all. Gould studied birds in England, Europe, Australia, and other places, for which he provided the information. While an artist, he was not one of the greats, and therefore had others do most of the finished paintings. The most prolific of these was his wife, Elizabeth Gould. This set has 448 hand-colored lithograph plates, 380 by or after Elizabeth Gould. The other 68 were drawn and lithographed by Edward Lear, who is recognized as one of the greatest artists of birds ever. His skills and influence made Gould's work the classic it is today. He also provided the guidance Elizabeth Gould needed to become the talent she was. Prior to Lear's participation, she struggled with perspective in her drawings, but under Lear's tutelage, her artwork blossomed. Item 11. £95,000 (US $126,615).

François Le Vaillant was an explorer, adventurer, natural history student, and a major figure in ornithology in the late 18th and early 19th century. The son of the French Consul to the Dutch colony now Suriname, by the time his family returned to Europe, he was 10 years old with wanderlust in his eyes. While visiting Paris, he became interested in natural history and determined to go exploring in the remotest part of the globe. To him, that was the interior of Africa. He was able to bring back a collection of specimens and later became a prolific writer on natural history. His specialty was ornithology. Among those is his book on paraquets (or parakeets if you prefer), Historie Naturelle des Perroquets. It was published in two volumes, 1801, 1805. The illustrations were provided by the noted artist of birds, Jacques Barraband. Vaillant's works are not without controversy. He would not adopt normal specie classifications and his books have numerous errors, but what he contributed to a world with limited knowledge was valuable, and if the illustrations are not always completely accurate, they are still beautiful. Item 19. £125,000 (US $166,548).

Next is what Shapero calls “one of the most admired bird books.” One look at the illustrations will explain why. The title is A Monograph of the Paradiseidae or Birds of Paradise, by Daniel Giraud Elliot, published in 1873. The Birds of Paradise, native to New Guinea and Eastern Australia, are some of the most beautiful of birds anywhere. Daniel Giraud Elliot was a zoologist and ornithologist, a founder of the American Ornithologist Union and the American Museum of Natural History in New York. He was not an artist, but he was a wealthy man, so he was able to hire the best to illustrate the beautiful color-plate books he wrote and produced. This is one. He had the illustrations created by Joseph Wolf, another great bird artist who also illustrated for John Gould. Speaking of Wolf, Shapero notes he “was universally regarded as the greatest bird artist of his time, if not of any time for his sheer technical genius.” His illustrations are as colorful as the birds themselves, even capturing their iridescent hues. Item 8. £50,000 (US $67,167).

This is what is considered the “foundation book” of Australia, The Voyage of Governor Phillip to Botany Bay, with the Account of the Establishment of the Colonies of Port Jackson & Norfolk Island. The primary author is Gov. Arthur Phillip himself, though the book is a compilation of his accounts and dispatches back home along with some made by others. Phillip was a sea captain, put in charge of the First Fleet sent to seriously colonize eastern Australia only a few years after it was visited by James Cook. He landed at Botany Bay, discovered and named by Cook, but ironically found it unsuitable for farming. He moved the settlement to Port Jackson, now site of Australia's largest city, Sydney. Most of Phillip's settlers were not immigrants longing to be free, though undoubtedly they so wished. They were English prisoners sent on the first transportation as there was not enough room to house them back home and the British figured Australia was far enough away they could never get back. Conditions were hard and food was scarce in the early time of settlement, but by 1792, the food shortage and other critical issues had been resolved and Phillip took his leave, sailing back to England, never to return. Offered is the rare hand-colored deluxe issue of this book. It contains 19 drawings of birds with credit given to John Latham. Item 25. £25,000 (US $33,583).