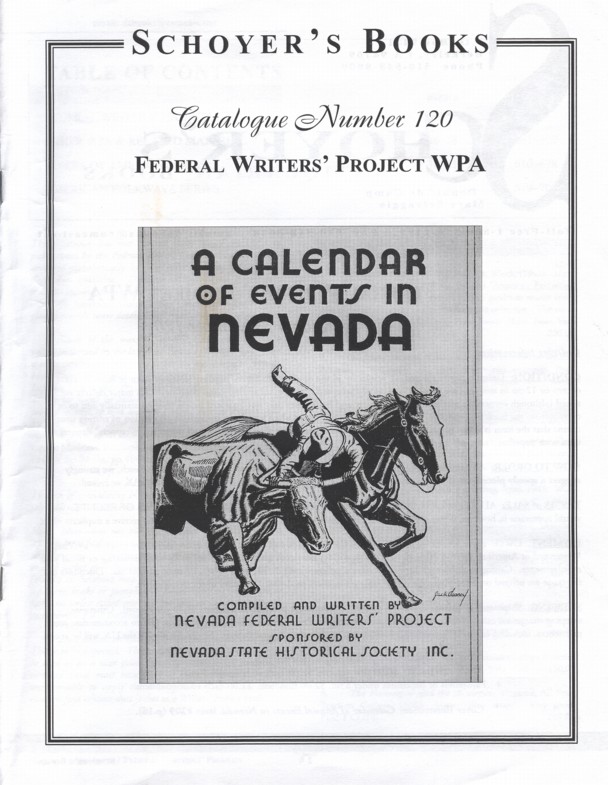 Schoyer's Books, of Berkeley, California, has issued a most unusual and interesting catalogue of primarily late 1930s and early 1940s works. Their catalogue number 140 is titled, Federal Writers' Project WPA. The "WPA" was, of course, the Works Progress Administration. The WPA was formed in 1935 at the height of the Great Depression to provide work for the unemployed. The Federal Writer's Project was a WPA program to provide work for, naturally, writers. Due to objections by some in Congress to the idea of subsidizing something so trivial as writing, after 1939 the states were required to chip in 25% of the cost for projects within their borders. The states did. However, with the federal government recognizing that during wartime, the sword is more powerful than the pen, it stopped paying people to perform non-military writing jobs. The WPA was disbanded in 1943, and the Federal Writer's Project came to an end. However, some of the works created by the FWP, not published during the time of its existence, were later published after the War.

Schoyer's offers 702 books from or about the Federal Writers' Project. Most are works of the FPA, published from 1937-43, a few are those published later, and a few more are books about the program. Most titles are related to a particular state. They may be state guides for tourists, state or local histories, or books about some particular topic within a state, such as local stories, history of an ethnic group in the area, or a calendar of events (see the image of the catalogue's cover). Many of the guides and histories pertain to a specific town, city, or county. Others cover broader regions or common features, such as the rivers series. There is also an elementary science series to explain the latest developments in technology and understanding. They must have been eye-opening works for children of the day, though we have come a long way now in the past 60 years.

Since most of the works have a connection with a particular state, we will list those with titles in the catalogue, so you can see whether your area is covered: Alabama, Alaska, Arizona, Arkansas, California, Colorado, Connecticut, Delaware, Florida, Georgia, Idaho, Illinois, Indiana, Iowa, Kansas, Kentucky, Louisiana, Maine, Maryland, Massachusetts, Michigan, Minnesota, Mississippi, Montana, Nebraska, Nevada, New Hampshire, New Jersey, New Mexico, New York, North Carolina, North Dakota, Ohio, Oklahoma, Oregon, Pennsylvania, South Carolina, South Dakota, Tennessee, Texas, Utah, Vermont, Virginia, Washington, West Virginia, Wisconsin, and Wyoming. It would have been easier to list those not covered. You can throw in Washington, D.C. too. Here are a few of the specific works you will find in Schoyer's catalogue.

Item 22 is an Almanac for Thirty-Niners, a humorous California play on the gold rush 49ers, issued in 1938 in anticipation of the 1939 Golden Gate International Exposition. The WPA had helped in the building of the recently completed Golden Gate and Bay Bridges in the San Francisco-Oakland area, and the Exposition would help celebrate these achievements. It also promoted trade and cultural openings to Latin America and the Far East. Of course, no one realized at the time just what would be coming from the East two years later. The Exposition was held on Treasure Island, a man-made island located in the Bay, midway between San Francisco and Oakland. Access was either from the Bay Bridge or by ferry. The main exposition was held in 1939, though it returned for a shorter and less successful run in 1940. The plan was that after the Exposition, Treasure Island would become the site of San Francisco's municipal airport. However, with the advent of the War, the Navy determined it needed the island, first signing a lease for the duration of the War plus five years, and then simply seizing the property outright. The Navy continued to use it as a base until 1997. Today, much of the old Navy housing is used as low-income residences, while long-term use for the site of the Exposition remains undetermined. Priced at $20.