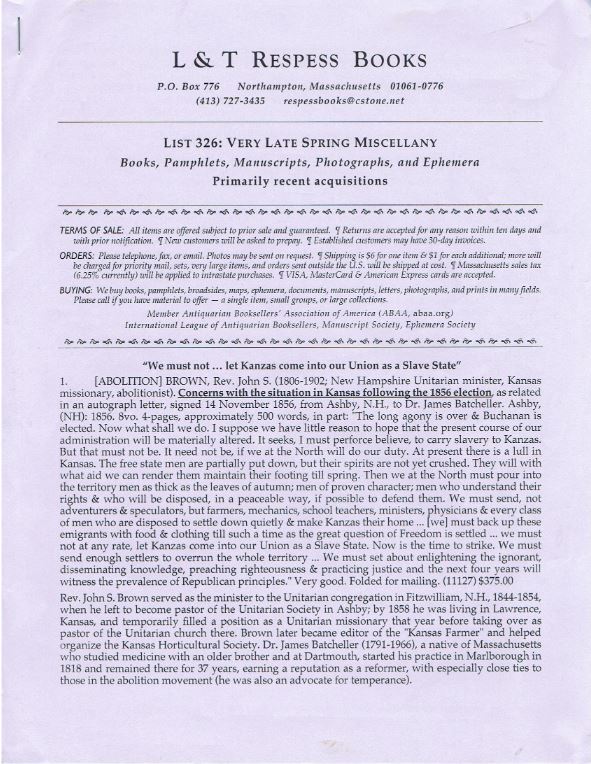 L & T Respess Books has issued their List 326: Very Late Spring Miscellany. Books, Pamphlets, Manuscripts, Photographs, and Ephemera. Primarily recent acquisitions. This certainly is very late spring. Perhaps it is even early fall. Nevertheless, the material is varied and interesting, extending beyond books to all sorts of other paper. There is much of a very personal nature, such as letters from soldiers on the field during the Civil War or a condemned man's letters home from prison as he awaited execution. Yes, there is some heavy stuff here. These are a few selections.

We begin with an interesting letter from the widow of a War of 1812 naval hero to recently inaugurated President Andrew Jackson. Susan Decatur was the widow of Commodore Stephen Decatur. Stephen Decatur was (still is) the youngest man to reach the rank of Captain at 25. He served with honor and bravery throughout his career, from fighting Barbary Coast pirates to the War of 1812. His service led to his becoming a national hero, and an affluent member of Washington society. All was going very well for the Decaturs but Stephen strongly criticized the conduct of another commodore, James Barron, a controversial officer. Barron challenged Decatur to a duel in 1820. Both men were hit, but Barron survived. Decatur did not. Suddenly, there was no income coming in, and Susan did not qualify for a pension. Her financial situation collapsed. On March 11, 1829, she writes Jackson, “...my situation is mortifying and distressing beyond all expression! After having been rear'd in affluence and cherish'd through life with the most unbounded affection, I now find myself overwhelm'd with desolation, and poverty staring me in the face.” Interestingly, despite discussing her own difficult situation, and she appealed to Jackson on her own behalf on occasion, in this letter she requested aid for William G. Ridgely, another officer who was struggling because he had a wife, eight children, an elderly mother, and three unmarried sisters to support. Susan Decatur was finally awarded a pension herself in 1837, with pay retroactive to her husband's death. Item 39. Priced at $1,500.

Next is a broadside accusing one of the famous un-heroes of the civil rights era, noted for denying people their rights, of the same, but not for the expected reason. “Bull” Connor was a power in the Alabama Democratic Party at a time when Democrats controlled Alabama politics as thoroughly as Republicans do today. He was also in charge of the Birmingham police department in 1963 at the height of civil rights marches. Connor was known for his use of attack dogs and fire hoses against the demonstrators. However, this broadside goes back way before the civil right era to 1939. The heading is We Won't Let the People Vote, and that certainly described Connor during the civil rights time, but here it was a different issue. The artist of this cartoon, Tom Skinner, was criticizing Connor and Mayor Jimmie Jones for not allowing the public to vote on repealing the tobacco tax. A petition had been presented with 5,000 signatures to hold a vote on repealing it. Jones is depicted as Hitler, Connor, sitting on his knee, as Mussolini. They are commenting on the stupidity of the people. Item 11. $1,250.

This is a letter from Letitia Tyler Semple, daughter of President John Tyler. Tyler was the only former President to support the Confederacy during the Civil War (though Franklin Pierce was quite sympathetic). President Tyler had died the year before this letter was written in April 1863, but Mrs. Semple and the letter's recipient, Ada Currier, were also southerners. Semple inquires of Currier as to the health of General Green, who was caring for her, and particularly of his son, Col. Green. The younger Green at the time was injured in battle but survived, was injured again at Gettysburg and survived, but was taken prisoner for the remainder of the war. She writes that she was hopeful their cause “has now a most encouraging prospect of success,” and if they can hold Vicksburg during the next few weeks, it will be the “triumph of triumphs.” Of course, the South did not hold Vicksburg and their cause continued to deteriorate towards its end. Here is the most unbelievable fact about President Tyler. Born in 1790, and President from 1841-1845, he still has two living grandchildren. That is correct, grandchildren, not great-great-grandchildren or great-grandchildren. How can this be? John Tyler had 15 children, the younger ones from his second wife, 30 years his junior. Lyon Tyler was born when his father was 63. Lyon Tyler also remarried a much younger woman, in his case 35 years. He had two sons in the 1920s when he was in his 70s. While both are quite aged now, in their 90s, they are still alive. Naturally, they did not know their grandfather who died 158 years ago. Item 25. $1,250.

Here are the letters from Oklahoma's death row inmate. From 1920-1924, Bob Blakely wrote these letters to his daughter, stepdaughter, and his wife. There is also one to his daughter from the inmate “next door,” so to speak. Blakely offers sound moral advice to the children, though to his wife he says “listen I don't think you are doing me rite.” If she shot him, she would be doing him “rite.” To the girls he says, “learn to love the lord & serve him and try to meet Dady in heaven because Dady is going to do his best to go there.” He tells his daughter Golda not to play with other children who are mean or get mad, “and when you go to get mad just think of where Dady is and say that the reason he is there was getting mad.” Indeed. Blakely was where he was because he abused and had a child with a different teenage stepdaughter whom he had tried to kill once before, but his wife stopped him. The second time he succeeded. In his last letter, to his stepdaughter the day before his execution date, he writes “so by for the last time here on earth but hope we can say howdy in heaven.” Respess doesn't tell us the final chapter, but since this is the last letter, we assume that it did not end well for Blakely. Item 66. $1,250.

Item 10 is a circa 1880 advertising poster for The Celebrated Spark Proof, Double Cut Off Slide Valve Agricultural Engine CLIMAX with Upright Boiler and the New Economizer with Horizontal Flue Boiler. Got that? I don't believe they make these any more, so the poster will have to do if you want one. However, the manufacturer, the Whitelaw Company of Woodstock, Ontario, is still in business. They make various custom machines. Item 10. $500.