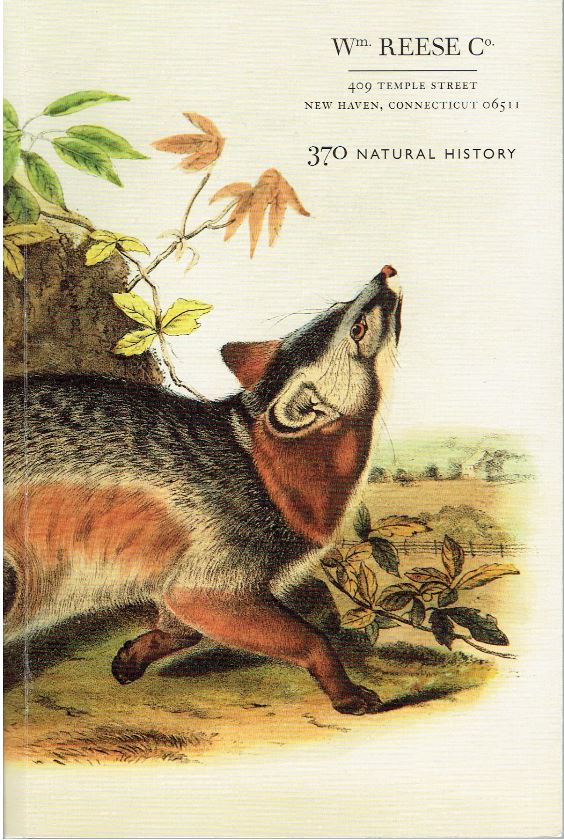 The William Reese Company recently published a catalogue of Natural History. They note that this is their first natural history catalogue since April 2005. Many of these are early color plate books, artistic beauties as well as informative. A large percentage come from America, but some originated in other nations. These are a few of the items you will find in this latest Reese catalogue.

We begin with one of the earliest accounts of the New World you will find. It must be since the author witnessed the return of Columbus in 1493. The then young man, Gonzalo Fernández de Oviedo y Valdes, was a page in the court of Ferdinand and Isabella. In 1505, he embarked on his first of five trips to the New World. He held various offices during this time. Oviedo would keep extensive notes of what he saw as well as interviewing others who traveled to the Americas. He kept particularly thorough notes on the natural history and Indians of this new land. In 1535, he published his account, La Historia General de las Indias. It is divided into 19 books, about half of them covering natural history. Book 7 is devoted to agriculture, books 8 and 9 cover plants and trees, 10 and 11 medicinal plants, 12-15 water animals, birds, insects and mammals. Other books would come years after this first edition, #19 in 1551, and 30 more in 1851. It also contains numerous woodcuts, and while not the greatest art, they provide the first reliable images of the New World. There are images of plants such as the prickly pear, objects including the hammock, and of the natives, including the noted picture of Indians panning for gold. Item 69. Priced at $250,000.

In the early 19th century pre-Audubon days, America's acknowledged greatest expert and illustrator of birds was Alexander Wilson. Wilson was born in Scotland and was trained as a weaver. He emigrated to America in the late 18th century, and not finding many opportunities for weavers, became a teacher. He then became interested in ornithology and painting, which led to his research in the field and painting of birds. He wrote and illustrated American Ornithology; or the Natural History of the Birds of the the United States... which was published between 1808-1814. Wilson died in 1813, leaving it to his friend, fellow ornithologist and naturalist George Ord, to finish the ninth volume. Wilson identified 26 new American bird species in his book. Item 98 is the second full edition published in three text volumes and a folio atlas in 1828-1829. Ord edited this edition, rearranging it to follow a systematic order by species, added textual notes, plus a “Sketch of the Author's Life.” He had the original engraver, Alexander Lawson, retouch the plates, and superior pigments were used to make the hand-colored drawings sharper than in the first edition. $25,000.

Speaking of birds and Wilson's successor as America's preeminent ornithologist, Item 2 is John James Audubon's Ornithological Biography, or an Account of the Habits of the Birds of the United States of America, published in five volumes 1831-1839. We generally associate Audubon with some of the most beautiful images of natural history ever drawn, not dry text, but here it is. These volumes contain the text that accompanied his Birds of America. As such, its about one one-thousandth the price of an excellent copy of the illustrated book, which can go for many millions of dollars. Audubon would have included the text with the illustrations except that England required nine copies of a book be placed with various libraries to secure a British copyright. Audubon wished to obtain the copyright, but each set of his Birds was extremely expensive to produce. He couldn't afford creating nine copies just to give to the British government. To get around this, he put the text in much less expensive separate volumes and thereby had his text copyrighted. $9,500.

Ernest Thompson Seton was born in England but moved with his family to Toronto at the age of 6. He went on to Manitoba after coming of age and became a naturalist. He would evolve into an artist and writer, a prolific one at that, specializing in animal fiction that was very popular. He became quite rich. He also was actively involved in scouting, forming a boy's group pre-Boy Scouts and later merging it into another organization he helped found, the Boy Scouts. Long before he became a successful writer, he wrote this pamphlet for the Manitoba Scientific and Historical Society, A List of the Mammals of Manitoba. It was published in 1885. It was his first separate publication. This copy contains two inscriptions by the author, the later second one noting that this work was published under the pseudonym Ernest E. Thompson. That is an odd way of saying it as that was his birth name. He later added “Seton” as it was a prominent old Scottish name. As an aside, Seton had a rough childhood as his father was abusive. Seton described him as “the most selfish man I ever knew, or heard of, in history or in fiction.” Before you accuse him of exaggerating, when he reached age 21, Seton's father handed him a bill for everything he spent raising him, including the physician's fee for delivering him. It came to $537.50. Seton paid the bill but never spoke to his father again. This same copy of his rare first book was sold at Parke-Bernet in 1948 for $65, and at Sotheby's in 1977 for $1,400. Item 86. $3,750.

If you like fish more for their beauty than their flavor, you will appreciate this book. William C. Harris, the author, was obviously a fisherman, his book being The Fishes of North America that are Captured on Hook and Line. With Eighty Colored Plates Made from Oil Portraits of Living Fishes Before Their Color Tints Had Faded. This title is a bit of an exaggeration, actually by 100%. There are only 40 plates, not 80. That wasn't an attempt at deliberate deception. Harris planned two volumes with 40 plates each but only finished one volume. Harris says he spent 25 years working on the text, the last 12 spent with artist John L. Petrie as they traveled 28,558 miles, Harris catching fish, Petrie painting them. Reese describes this as one of the two greatest illustrated American ichthyological books of the 19th century. It was published in 1898. Item 48. $7,500.