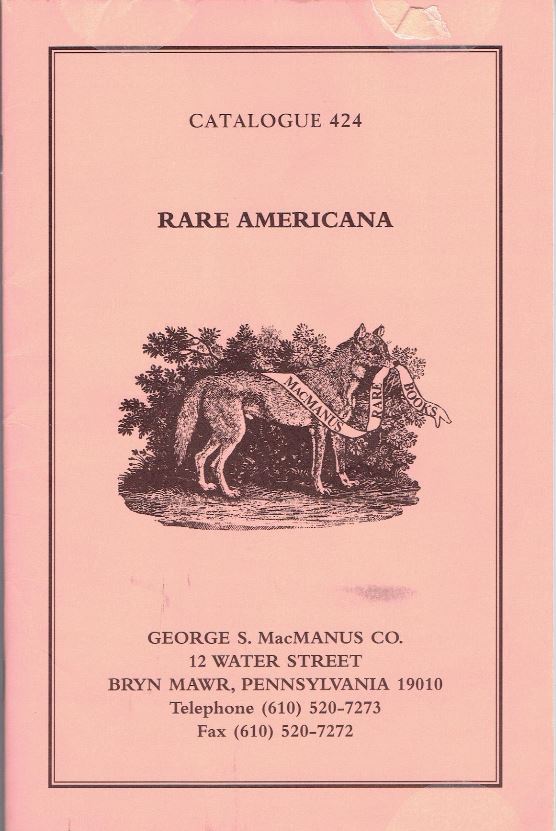 The George S. MacManus Co. has issued their Catalogue 424 of Rare Americana. Within the field of Americana there is no particular concentration. Anything goes. A few items are perhaps more British or Canadian, but the ties to America were always close. We do note there is a large selection of material by or pertaining to Benjamin Franklin. If you are a collector or devotee of America's first great scientist and polymath, there is material here you will want to see. These are a few of the items you will find in this selection of Americana.

We begin with one of the most thorough descriptions of the animals of North America from the days before the Revolution. The writer was not an American. He was a German, living in London at the time. John (Johann) Reinhold Forster was one of the most notable of naturalists then, though he was mainly making a living by translating the works of others. Perhaps his limited personal participation had something to do with his short temper and unpleasant personality. This account was not based on his own investigations but compiled from the works of others. Among those was the account of his travels by Peter Kalm, written in Swedish. Forster translated his book to English. The title of Forster's work is A Catalogue of the Animals of North America. Containing, an enumeration of the known quadrupeds, birds, reptiles, fish, insects, crustaceous and testaceous animals, many of which are new, and never described before. To which is added, short directions for collecting, preserving, and transporting, all kinds of natural history curiosities, published in 1771. Forster's most notable accomplishment would come a year later when, at the last minute, naturalist Joseph Banks withdrew from serving as the naturalist on Captain James Cook's second voyage. Forster was appointed as his replacement, and was accompanied by his son, Georg. Both Forsters kept extensive diaries on the journey, but Johann was denied permission to participate in the writing of the official account by Cook. Again, his crusty personality made him intolerable to Cook. As a result, Georg Forster published an account, undoubtedly with his father's assistance, which was released prior to the official report, in violation of the rules set down for publishing accounts. Item 94. Priced at $7,500.

In early 1865, reports came out that Union and Confederate leaders would meet to discuss the possibility of a peaceful resolution to the Civil War. By this time, it was inevitable that the Union would be victorious, but there was still more bloodshed that could be avoided, and it was preferable to all to have the war end peaceably. Ultimately, the two sides met on a boat off of Hampton Roads, Virginia. The Union contingent was headed by President Abraham Lincoln, the Confederates by Vice-President Alexander Stephens. Lincoln, with the strong hand, still considered various compromises short of unconditional surrender. There might be compensation for slaveholders whose slaves were emancipated, and generous terms for the South. However, what Lincoln would not accept was anything short of complete reintegration of the South into the Union and the recognition of national authority. For some Confederate soldiers, this was unacceptable. The result was that some units passed what were known as “Fight to the Death” resolutions. These called on the Confederacy to fight on to the last man to achieve independence from the Union. Item 73 is one such resolution, Resolutions of the Texas Brigade, published in early 1865. The Texans argued for continuing the war unless full independence was achieved. Stephens and his delegation were not authorized to accept reunification with the North, and Confederate President Jefferson Davis would not agree to it. As a result, the conference failed to achieve a peace treaty and the Texas Brigade got its wish, a continuation of war. Of course, the South fell two months later and the Confederacy was forced to accept an unconditional surrender. Item 73. $300.

Here is one of those works from America's great scientist-printer-writer-philosopher-political leader, Benjamin Franklin. Franklin was America's most notable representative overseas at the time of the Revolution. In England, he advocated for greater self-determination for the colonies in the times before the Revolution, and as Ambassador to France during the Revolution, for French military support for the war for independence. His achievements in science, particularly in the study of electricity, were at least as notable. Franklin, from poor beginnings, through thrift, intellect, and charm, rose to the highest levels in American society. Franklin died in 1790 and his memoirs would become a popular book not only in his homeland but Europe as well. Item 114 is a copy of the first edition of Franklin's autobiography in French, Mémoires de la Vie Privée de Benjamin Franklin... published in 1791. This is not just the first edition in French, it is the true first edition. The French translation of Franklin's memoirs was published prior to any edition in English, the first English edition, ironically, being a translation back of the French translation. Item 114. $3,750.

Next is a two century old manuscript account of The Elizabeth Islands. Perhaps you don't know where they are. Named for Queen Elizabeth I, they lie off the southwestern coast of Cape Cod, a chain of seven small islands and a mess of other tiny ones. They total a little over 13 square miles. All but two of them are now owned by one Boston family, but those two are still open to the public. The unnamed author explains that “Cows are kept on all the islands; but they are most noted for their sheep, which are larger, better fed, and more effectually sheltered, than those on Martha's Vineyard. Their fleeces are much finer, and more abundant.” The author also says that lobsters, not that plentiful on Martha's Vineyard, “are caught in great abundance at all the Elizabeth Islands.” Finally, he/she says that the islands are “thinly populated,” but “capable of supporting a great number of inhabitants.” That day has yet to arrive. As of the last census, there were still only 75 people living on the islands, two-thirds of them in the village of Cuttyhunk. Item 16. $1,500.

Giles Everard was a 16th century Dutch physician who probably was a good doctor for the most part, but who got this one really wrong. In fairness To Everard, many made this mistake in his time. Item 39 is a first edition in English of his book Panacea; or the Universal Medicine, Being a Discovery of the Wonderfull Vertues of Tobacco Taken in a Pipe... Originally published in Latin in 1587, this first English edition was published in 1659. Everard believed tobacco to be a cure-all, a medicine so beneficial that there would soon be much less need for physicians. Indeed, he says, “I confes that Tobacco is a plant of God's making...” However, Everard also saw the work of the Devil in tobacco because many were using it for improper purposes, that is, for forbidden pleasures. He notes that tobacco is abused by some, saying “...there is some reason to suspect, that there hath been much of the cunning of the Devil, and of man's perverse understanding imployed in the large propagation of it, because that Christians, Jews, Turks and Infidels, almost all mankind, who are naturally so averse from all that is good, and prone to nothing but mischief, are so much delighted with it.” $1,750.