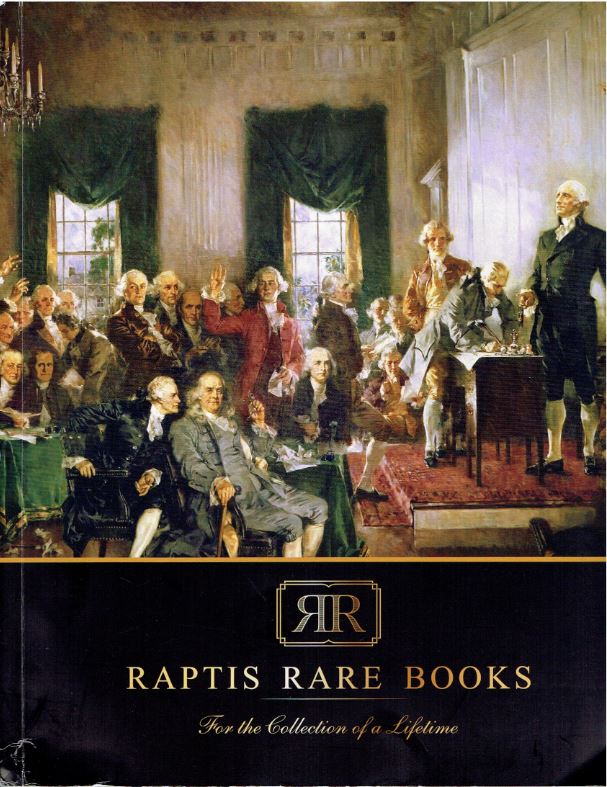 Raptis Rare Books has released a new catalogue. While their catalogues are untitled, they provide a table of contents to show you what you can expect. The contents are: Opening Selections; Americana; Religion, History & World Leaders; Literature; Children's Literature; Science, Economics & Social Theory; and Sports & Leisure. These are a few examples of the items you will find in this catalogue.

Here is a book with which you may not even be familiar, but it contains original pieces by some notable writers and even their signatures. The title is Liber Scriptorum and it was the first book published by the Authors Club of New York in 1893. The Authors Club was organized in 1882 as a social club for authors along with a support group for younger writers. Liber Scriptorum was conceived as a fund-raiser for the club. Each member was asked to create an original story or poem for the book that would not be published elsewhere. Club member Andrew Carnegie contributed space for the club in his building, but the funds raised from the book were used to furnish the rooms. A total of 251 copies were to be printed, and each contributing author signed each copy by their work. The number of copies was about 30 short of that as some were never bound, the individual stories being sold separately. Copies were sold for an enormous price (in those days) of $100 each, the equivalent of several thousand today. Among the most notable names and their stories were Mark Twain (The Californian's Tale), Theodore Roosevelt (A Shot at a Bull Elk), and Andrew Carnegie (Genius Illustrated from Burns). Club member and printer Theodore De Vinne did the printing for cost and contributed a piece. Raptis notes that despite the intentions, Twain's story was published again, as part of a collection in 1906. The Authors Club of New York was disbanded in 1973 and its archives given to the New York Public Library. Item 109558. Priced at $10,000.

If you would like to collect the James Bond novels, Raptis is going to make this real easy for you. They are offering a set of the twice 007 number of Bond novels, that is, all 14. They were published from 1953-1966. The titles are Casino Royale, Live and Let Die, Moonraker, Diamonds are Forever, From Russia with Love, Dr. No, Goldfinger, For Your Eyes Only, Thunderball, The Spy Who Loved Me, On Her Majesty's Secret Service, You Only Live Twice, The Man with the Golden Gun, and Octopussy and the Living Daylights. Each is a first edition and is in fine condition, each with a fine or near fine first issue dust jacket. Five of the books have been signed by Sean Connery, the first of many actors to portray Bond in the very successful film adaptations. Item 105482. $125,000.

Margaret Mitchell is well-known as a writer, but not as a speaker. There is a reason, as she revealed in a typed and signed letter she wrote on September 5, 1936. She had been asked to speak by a Mrs. Simpson, and Mitchell responded as follows - “Thank you for your letter and your interest. No I am not contemplating any lecture tour. In fact I have turned down many invitations to speak. I do not intend ever to make any speeches, for I realize that writing books and making speeches are two very different affairs.” At this time, Gone With the Wind had recently been published and already had become enormously popular. However, there is an irony in Ms. Mitchell's letter. While indeed she was a writer, at least at that moment, she never published another book in her lifetime. She quit while she was ahead. Item 109371. $2,250.

This is Dr. Martin Luther King's first book, Stride Toward Freedom: The Montgomery Story, published in 1958. The story is that of the Montgomery Bus Boycott of 1955-1956, in the early days of the civil rights movement. In those days, as city buses filled their rows, seated black passengers were forced to give up their seats to newly arriving whites. In late 1955, Rosa Parks, a secretary to the NAACP and in consultation with others, decided it was time to put a stop to this practice. She had herself been victimized by it in the past. A white person entered the bus, the driver told her to vacate her seat, and Rosa Parks refused. She was found guilty of violating the law and fined $10. She appealed. Meanwhile, community leaders got together and selected a young minister, Martin Luther King Jr., to lead the movement, and a boycott of riding the buses was called. This was a serious threat to the finances of city's bus system as 75% of their riders were black. Parks appealed her conviction, won, but Montgomery appealed all the way to the U.S. Supreme Court. Late in 1956, the city lost their appeal and at that point backed down and allowed blacks comparable access to bus seats. The boycott had gone on for over a year. This copy of King's book was owned by writer James Baldwin and contains his signature. Baldwin, an African American and one of America's most highly honored writers of the twentieth century, often wrote about and advocated for civil rights. Item 92344. $8,200.

Usually, the book precedes the film, but once in a while it happens the other way. A film, not based on a book, becomes so successful that a book is published later to fill the void. This one started out as a low-budget, counterculture film, but struck such a nerve that it became one of the highest grossing films of 1969. The title of the film and book is Easy Rider. In the era of hippies, drugs, communes, and perceived danger for outsiders passing through a reactionary American South, this one hit the target. Add to that some rock music in the soundtrack and a couple of motorcycles, and you couldn't ask for more. The book, or screenplay, was written collectively by Peter Fonda, Dennis Hopper, and Terry Southern. Staring roles went to Fonda, Hopper, and Jack Nicholson. The title page has been signed by each of the latter three. Numerous stills from the movie along with the script, interviews and articles are found in the book. Item 99857. $3,500.