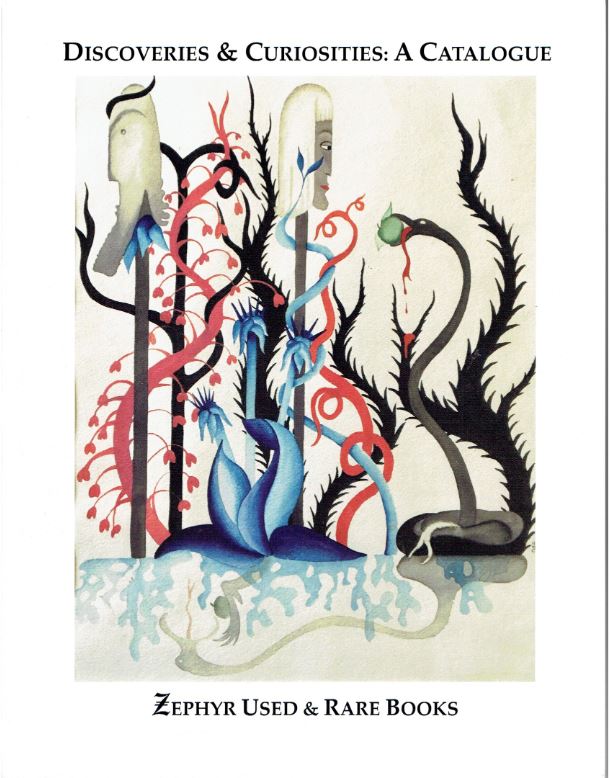 Zephyr Used & Rare Books has issued a selection of Discoveries & Curiosities: A Catalogue. “Discoveries and curiosities” means just about anything. There are some books, though rarely expensive classics. They may be more along the lines of mysteries and other entertaining works from the first half of the twentieth century. Most of the items aren't full-length books but are ephemeral in nature, broadsides, printed catalogues or advertising material, the type of things people encountered everyday. People saw this type of material everyday when it was new, but they are not the sort of items that are often kept, so it is surprising and exciting to find it all these years later. Here are a few examples.

We expect to see concern about the environment and natural resources to be expressed in political campaigns today, but it is perhaps somewhat surprising to see it a focus of a campaign poster during the Depression. People had more immediate concerns in those days, such as finding a job or even finding something to eat. Nonetheless, the Roosevelt campaign published this poster to promote his 1936 reelection. It is headed, Our Wealth of Earth and Water. It claims, “For the first time the Federal Government is waging a nation-wide campaign to stop waste and exploitation of our natural resources. Under the New Deal our precious heritage of land and river and forest is being saved for future generations.” The broadside warns of the dangers of the dust bowl and touts the administration's programs such as the Soil Conservation Administration, the Department of Agriculture, the Rural settlement Administration, the Civilian Conservation Corps, and the Tennessee Valley Authority. It also features a cartoon from Clarence Batchelor, who won a Pulitzer Prize for a cartoon the following year. Item 181. Priced at $125.

This may not quite be a conservation movement, but the federal government was involved in encouraging young people to use the land many years before the New Deal era. Item 4 is a set of seed samples from the popular “School Garden” movement early in the century. The government provided seeds for schoolchildren to plant, believing this contact with the land would be healthy for all concerned. This School Set of Seeds was provided by the Bureau of Plant Industry of the Department of Agriculture, circa 1905. They explain there is “nothing better fitted for the healthful development of children...opportunity for spontaneous activity in the open air, and...engenders habits of thrift and economy, develops individual responsibility, and respect for the rights of others...” This set includes its seed samples, all given both their common and Latin names. They range from edible vegetables such as wild rice, onions, asparagus, and buckwheat to items like Bermuda grass and milkweed. It is believed that by 1906 there were 75,000 school gardens in the United States, and the concept was heavily promoted during World War I to increase the food supply. I don't know whether any of these seeds will still sprout since it's been over a century now, but if so, you might get some historic, non-genetically engineered crops. $1,900.

Item 113 is an extensive archive of dress designs and other material from fashion designer Rena Rowan Damone. She designed women's and girls' clothes for some of the finest names in fashion such as Oleg Cassini. She was also a co-founder of the popular clothing brand Jones New York. At the same time, she also created fashions for stores with not quite so high fashion a reputation, notably Sears. Today, Sears may be a long-faded name in retailing barely hanging on, but this archive is filled with designs from the 1960s when they were still America's largest retailer. Along with the designs, the archive includes over 3,000 fabric samples. The archive is held in 25 volumes. Rowan Damone featured many full-length dresses, but she was also creating fashions with higher hem lines and brighter colors in the 1960s. Rena Rowan Damone, who died in 2016, was the fifth and final wife of 1940s-1950s singer/crooner Vic Damone, very popular in his day before being displaced by rock and roll. $5,500.

There are some books you really wouldn't publish today. We have become more sensitive to the feelings of others. In 1934, there wasn't a heck of a lot of sensitivity. Item 50 is a book by Walter Bodin and Burnet Hershey, It's a Small World: All About Midgets. Illustrated. This book is supposed to tell readers about the secret life of small people. The public's curiosity was peeked by the use of such people in carnival sideshows, circuses, and films. Small people are shown with some of the celebrities of the day, including actors Charlie Chaplin, William S. Hart, and Tom Mix. There is even such a picture with President Harding. Famous small people are also pictured, including Tom Thumb, who appeared for years in P. T. Barnum's shows. $125.

Here is another subject which is not seen quite so positively as it once was – consumption of alcohol. The amount of drinking of hard liquor in the home or out is not quite so prevalent today as it once was. Item 126 is “Cheerio!” A Book of Punches and Cocktails. How to Mix Them, and Other Rare, Exquisite and Delicate Drinks. It was written by Charles, former bartender at Delmonicos. Charles has some harsh words for those opposed to the consumption of alcohol. He writes, “Today, the art of creating exquisite drinks to match exquisite moods is gasping on its death-bed, and the dull ogre, Puritanism, supplanting the Skeleton, sits gloating by the bed-side, waiting eagerly to hear the last death rattle.” The hyperbole can be explained. The year was 1930 and the nation was still living under the yoke of Prohibition. Add to that the Great Depression had just started and perhaps it is understandable that people wanted to drink. Nonetheless, Charles needn't have been quite so concerned. Just three years later, Prohibition was repealed. $300.