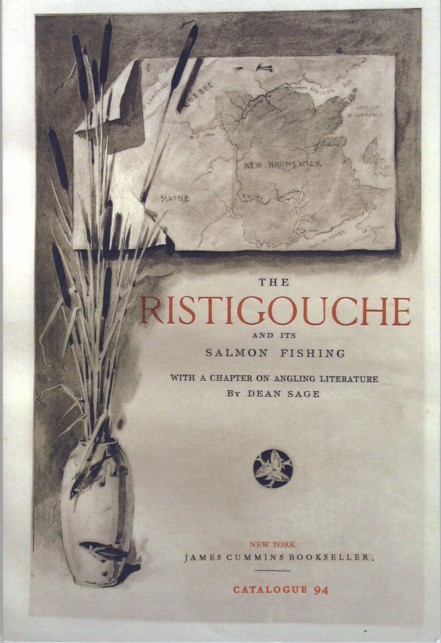 James Cummins Booksellers' latest catalogue, number 94, is divided into three sections: angling, Derrydale Press, and general sporting and natural history. This is essentially a sporting catalogue, with angling receiving its own separate heading because 40% of the 468 items are in this specific field. However, the final section offers titles in a great many other sports. The Derrydale Press, established in New York in 1927, published primarily outdoor and sporting titles in extraordinarily high quality editions. Their work is highly valued and collectible today.

It is one of the oldest of sports, and its devotees are among the most passionate of any. Angling (fishing to the uninitiated) may not fill sports bars with boisterous fans like football, nor have a strident National Fishingpole Association comparable to the NRA with guns, but anglers are no less ardent than other sports fans. Indeed, one can only feel sympathy for wives of men who are both anglers and book collectors, as having two such fanatical obsessions could hardly leave time for any other interests. For those who are not aficionados of this sport, all of these treatises on flies and lures and such probably appear mundane. As someone who has never hooked anything larger than a finger or an ear, I will have to admit that I don't quite get it. That doesn't matter. If you are an angler, you need no explanation of its appeal from me. You are already hooked. All you need is a copy of this catalogue so you can feed frenzy on these titles. Here are a few for the angler.

The folio first edition of The Ristigouche and Its Salmon Fishing by Dean Sage is one of the most highly sought of angling titles. Just 105 copies were published in 1888 (this is number 19) of this exquisite book. The Ristigouche (or Restigouche) is a river which runs though the northwestern portion of Canada's New Brunswick province, and then forms the border between New Brunswick and Quebec. French colonial ambitions in the New World came to an end in the Battle of the Ristigouche in 1760. It was the last naval battle of the French and Indian War. Today, fish are the major adversaries. Item 131. $20,000

Item 115 is William Milnor Jr.'s An Authentic Historical Memoir of the Schuylkill Fishing Company...from 1830. The Schuylkill Fishing Company, founded in 1732, is America's oldest angling organization, and Milnor served for a while as its secretary. He would also serve as a member of Congress from 1812-1820 and as Mayor of Philadelphia from 1829-1830. This book is bound together with his second title, Memoirs of the Gloucester Fox Hunting Club... This was the nation's first fox hunting club, a sport that did not catch on so well in America. The two books are filled with anecdotes, illustrations, and other information about these early sporting clubs. $1,000.