A Variety of Material from Jonathan A. Hill Bookseller 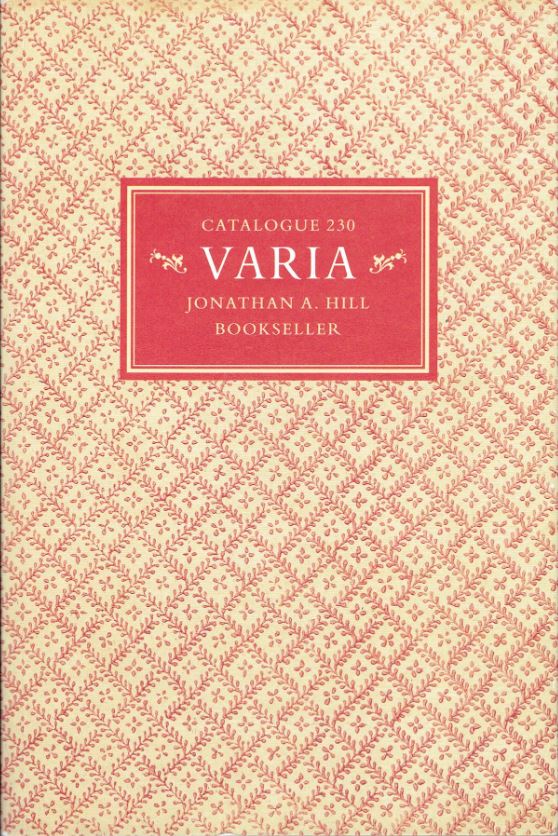 A Variety of Material from Jonathan A. Hill Bookseller

Jonathan A. Hill Bookseller has released their Catalogue 230 – Varia. It is indeed a variety of material, hard to pinpoint other than to say it is mostly very old and European in origin. There are a large number of historic art, books, and other auction catalogues from the 18th and 19th century. Many include prices, some even the names of buyers. These were major sales that took place on the continent in a time of spectacular collections. Other books cover numerous subjects. These are a few examples of what can be found.

We begin with the auction catalogue of an extraordinary French book collector, Baron Jérôme Pichon. Speaking of him, Hill says, “it can be argued that Pichon was the greatest collector of books in the 19th century.” He was not otherwise a notable figure, son of an architect, a minor public official for a while. It was for his love of books that Pichon became a notable figure. At the age of 19, he purchased the first book for a collection and from then on he was hooked. He would serve as President of the Society of French Bibliophiles for half a century. He developed a large collection, but then, for whatever reason, he decided to put it up for sale. Pichon's first auction took place in Paris in 1869. However, he could not live without books, so quickly Pichon began building his second collection. It was the sale of this second collection that is covered in this auction catalogue, Catalogue de la Bibliotheque de feu M. le Baron Jérôme Pichon. It took place over several years after Pichon died in 1896. There were over 6,000 lots in Pichon's second sale, including illuminated manuscripts, illustrated books, fine bindings, and prints. A second catalogue of part of the sale is included with this. Item 27. Priced at $1,950.

Next we have a book promoting tolerance of different faiths from a time when tolerance was in short supply. Theologiae vere Christianae Apologia by Robert Barclay has also been called the Quaker Bible, and Quakers knew much of intolerance when when it was published in 1676. The Quakers, officially the Society of Friends, believed each person had an inner light that enabled them to see the truth of revelation. The result is that they needed no priests or leaders, no rituals, no liturgy, no ceremonies. As such, it meant no formally organized religion, and people of all faiths could logically be treated as equals. This was threatening to many established religions that held their congregants together through these ceremonies. Quakerism was only about 30 years old at this time and before Barclay, it didn't have much in the way of scholarly representation. Barclay had previously set down his 15 theses of his faith and this book put them all together and explained his beliefs. It became the definitive statement of the faith for another two centuries. Item 35. $29,500.

Tell-all magic books are often very popular, as was this one from the 18th century. The title is The Whole Art of Legerdemain; or Hocus Pocus in Perfection: by which the Meanest Capacity may perform the Whole Art without a Teacher. This is an eighth edition, published in 1781 (it was first published in 1722). The author is unknown, but a likely candidate is bookseller Henry Dean. The woodcut illustrations depict such tools of the trade as playing cards and cups and balls. One panel shows “How to cut a man's head off and to put the head into a platter, a yard from his body.” Don't try this unless you are certain you know how to do it in an illusory manner. Item 46. $6,000.

Here is a catalogue of another massive collection. This time it was prints rather than books. This collection was formed by Michel de Marolles, the abbot of Villeloin. The title is Catalogue de Livres d'Estampes et des Figures en Taille douce and it was published in 1666. He began collecting prints in 1626 and soon became dedicated, perhaps obsessed. He was the Thomas Phillipps of prints, earning the title the “Father of Print Collecting.” Print collecting was uncommon in his time with de Marolles developing by far the largest collection ever up to that point. At the time this catalogue was published he had amassed a collection of 123,400 prints. He sold them en bloc to Colbert on behalf of the King. Today it is the foundation of the Bibliotheque Nationale's Department of Prints. Item 71 $12,500.

Like Pichon when he sold his collection, de Marolles couldn't quell his passion. He began building a second collection. Six years later he published a catalogue of that collection as well. It contained a more modest 100,848 prints. Item 72 is Catalogue de Livres d'Estampes at de Figures en Taille-douce, published in 1672. The second collection was dispersed rather than being kept together. $10,000.

Here is another work that achieved a superlative, although an odd one. The title is Ritter Orden Deß Podagrischen Fluß. The author was Georg Fleissner, publication date 1601. Hill tells us that this the longest poem on the gout. This is a third edition, preceded by editions in 1594 and 1596. It must have been popular in its time. With 1,088 lines, it is by far the longest poem on gout. It is evidently humorous. Item 51. $2,500.